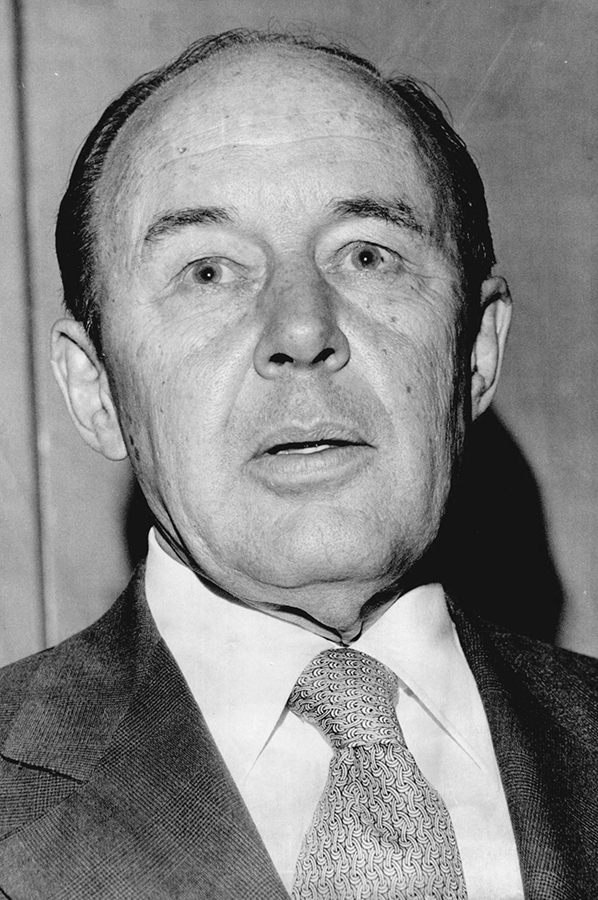 Political advisor, lobbyist, and corporate vice president Bryce Nathaniel Harlow was born on August 11, 1916, in Oklahoma City, Oklahoma. He was one of four children born to Victor Emmanuel and Gertrude Gindling Harlow, who were both active in business, politics, education, and civic organizations. Victor Harlow, a successful entrepreneur in Oklahoma City, owned and operated Harlow Publishing Company. Bryce Harlow followed his parents' advice to set high academic and professional standards and to pursue his dreams.

Harlow graduated Phi Beta Kappa from the University of Oklahoma (OU) in 1936 with a bachelor's degree in political science. In 1938 he moved to Washington, D.C., and served as assistant librarian in the U.S. House of Representatives while he conducted research on the intricacies of the House Ways and Means Committee for his master's thesis. Serving as assistant librarian, he witnessed firsthand the ill effects caused by the patronage system that continued to plague Congress and other parts of the federal government. However, as he continued to research the workings of Congress, he developed a deep admiration for the political and legislative process. He completed his research in 1940 and received a master's degree in political science from OU in 1942.

Harlow stayed in Washington, D.C., and served as administrative assistant to Oklahoma Rep. Wesley E. Disney. On September 25, 1940, Harlow married Betty Paxton Larimore, whom he had met while attending OU. Their marriage produced three children: Margery "Peggy", Trudy, and Larry. In July 1941 he joined the U.S. Army and was assigned to the Pentagon in the area of public relations under the command of Chief of Staff George C. Marshall, and later he served as the army's congressional liaison under Maj. Gen. Wilton B. Persons. After the war Harlow took a staff position in the House Armed Services Committee.

In 1952 Harlow joined Pres. Dwight D. Eisenhower's staff as chief speech writer, and in 1958 he became deputy presidential assistant for congressional affairs. He learned early that to succeed politically required compromise and a bipartisan approach. He could often be found behind the scenes, working compromise solutions between the Republican White House and Democratic leaders of Congress. He became a major participant in Republican Party politics, serving as the party's chief policy advisor as well as the author and editor of the party's national platforms in 1954, 1964, 1968, and 1972.

Following his tenure in the Eisenhower administration Harlow entered the private sector and helped establish an office in Washington, D.C., for Proctor and Gamble Corporation. He worked for Proctor and Gamble as director of governmental relations. He continued in that position, taking leaves of absence to serve in Pres. Richard M. Nixon's administration from 1968 to 1970 and from 1973 to 1974, initially as assistant to the president for legislative affairs and later as counselor to the president with cabinet rank. Before Nixon's resignation in 1974, Harlow returned to Proctor and Gamble, serving as corporate vice president until his retirement in 1978.

Harlow promoted an informed, virtuous citizenry with individuals who would work for the common good rather than for self-aggrandizement. Described as a man of high moral character and integrity, he set forth examples of leadership and laid out a formula of success in both the public and private sectors that individuals as well as corporate organizations could aspire to achieve. In 1981 Pres. Ronald Reagan awarded him the Presidential Medal of Freedom, the nation's highest civilian award. On November 3, 1982, Betty Harlow died of lung cancer, and Bryce Harlow married his longtime secretary, Sally Studebaker, on July 28, 1983. He died on February 17, 1987, in Arlington, Virginia, from complications associated with emphysema. In his memory the Bryce Harlow Institute on Business and Government Affairs was created at Georgetown University in 1990.

The following (as per The Chicago Manual of Style, 17th edition) is the preferred citation for articles:
Connie G. Armstrong, “Harlow, Bryce Nathaniel,” The Encyclopedia of Oklahoma History and Culture, https://www.okhistory.org/publications/enc/entry.php?entry=HA022.