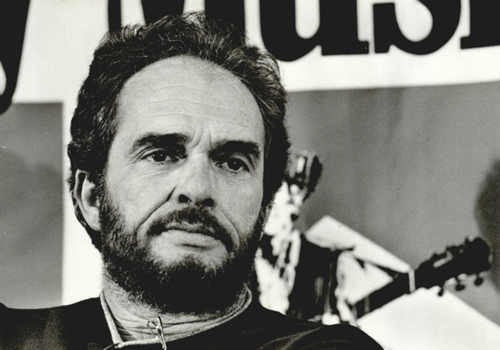 Although Merle Haggard was not born in Oklahoma, in the public mind his life story is intertwined with image of the state that his parents left during the Great Depression. Like Woody Guthrie a generation earlier, Haggard wrote songs about the plight of Okie migrants to California. He was born in Bakersfield, California, on April 6, 1937. His parents, Jim and Flossie, had departed from the family farm near Checotah, Oklahoma, in 1935 after their barn burned. Jim Haggard, who had learned to play the fiddle while living in Oklahoma, died in 1946 when Merle was nine years old. As a teenager Merle Haggard began committing increasingly serious crimes. In 1957 he was convicted of burglary, and, after a failed attempt to escape from a county jail, Haggard "turned twenty-one" in California's San Quentin State Prison.

Paroled in 1960, he earned a reputation in the blossoming Bakersfield music industry. In 1965 he married Blanchard, Oklahoma, native Bonnie Owens, his second wife. During their union Haggard composed some of his greatest songs, including the politically slanted "Fighting Side of Me" and "I Take a Lot of Pride in What I Am," semiautobiographical convict songs "Sing Me Back Home" and "Mama Tried," working-class anthems "Workingman Blues" and "If We Make It Through December," drinking and honkytonk classics "I Think I'll Just Stay Here and Drink" and "Swinging Doors," and Dust Bowl ballads "Mama's Hungry Eyes" and "Tulare Dust." His politically charged "Okie From Muskogee," released at a time when the country was divided by the Vietnam War and other issues, styled Haggard as an inspirational leader for many conservatives. The song endeared him to a number of Oklahomans who shared the song's sentiment about drug use, respecting the college dean, and deriding the hippie movement. Haggard has commented in several differing ways about the song's intent, implying that it was a lighthearted ditty that took twenty minutes to write, that it was written from what he thought his father's point of view would be, or, as he told a newspaper, that it was a patriotic song at a time when patriotism was not popular. Soon his talent provided a body of work that had many proclaiming him "the Poet of the Common Man."

His devotion to Tulsa-based Bob Wills and Western swing led Haggard to participate in the Tommy Allsup–produced album For the Last Time (1974), a tribute to Wills and a reunion of the Texas Playboys. Oklahoman Tommy Collins (born Leonard Raymond Sipes) wrote several songs for Haggard, including "Carolyn" and "The Roots of My Raising," and Haggard wrote the song "Leonard" about Collins. Among Haggard's accolades, which include the Country Music Association and Academy of Country Music Entertainer of the Year, a Grammy (1984) for Best Country Vocal Performance, and a membership (1994) in the Country Music Hall of Fame, in 1997 he was included in the first class of inductees into the Oklahoma Music Hall of Fame. In 2003 Haggard and his sister Lillian donated a number of their family belongings to the Smithsonian Institution's Museum of American History to represent the migrating Okies in an exhibit on Route 66. In 2005 Merle Haggard still released albums and continued to tour. He lived near Redding, California, with his fifth wife, Theresa. Haggard died on his birthday, April 6, 2016.

The following (as per The Chicago Manual of Style, 17th edition) is the preferred citation for articles:
Larry O'Dell, “Haggard, Merle Ronald,” The Encyclopedia of Oklahoma History and Culture, https://www.okhistory.org/publications/enc/entry.php?entry=HA059.