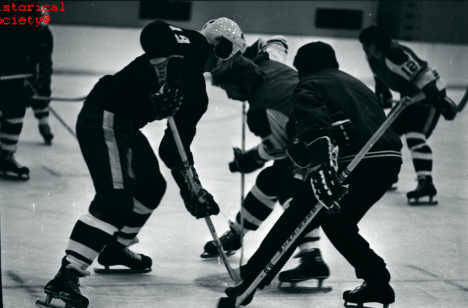 A game similar to many played throughout history in Europe and heavily affected by the American Indian game lacrosse, hockey probably developed in Canada in the mid-1850s. The fast-paced contest is played on ice, and players on skates control a puck with a stick, trying to shoot the puck into the opponents' goal. Professional leagues appeared in North America by 1904. In Oklahoma professional hockey relegated itself to the two largest cities, Tulsa and Oklahoma City.

In 1928 Walter Whiteside organized a franchise in Tulsa for the American Hockey Association (AHA). This first Tulsa Oilers team won the regular-season championship and the playoffs. Initial success created a niche for hockey that endured in the city through much of the twentieth century. The team lost in the finals in 1930 and then won both the season and playoffs again in 1931. The Oilers continued playing in the AHA until War World II shut the league down in 1942 but in 1945 again took to the ice, now playing in the United States Hockey League. In 1951 the league folded, and in 1965 the Oilers returned to the rink as a member of the one-year-old Central Hockey League (CHL) as a minor league team for the Toronto Maple Leafs of the National Hockey League (NHL). The Oilers won their first CHL championship in the 1967–68 season. Tulsa won the CHL's last championship in 1984 before the league folded. During a twenty-year stint in the now-defunct CHL, Tulsa had six different NHL parent teams. When the CHL organized again in 1992, the Oilers fielded a team and won the inaugural championship. This Tulsa Oiler reincarnation flourished into the twenty-first century.

Oklahoma City had neither the initial success nor the fan support of its eastern neighbor but by the end of the twentieth century boasted a large fan base. In 1933 the Oklahoma City Warriors, who played their home games at the Stockyards Coliseum, began their first season in the AHA. The Warriors never presented their fans with a winning record and left Oklahoma City for Minneapolis before their third season ended. Oklahoma City did not exhibit a team again until 1965 when the CHL brought the Oklahoma City Blazers to town. The first two seasons produced championship playoff teams. The Boston Bruins served as the NHL affiliate for the Blazers through 1972. Oklahoma City did not field a team during the 1972–73 season but affiliated with the Toronto Mapleleafs beginning with the 1973–74 season. Again sitting out a year during the 1977–78 season, the team opened in 1978 with a new name, the Oklahoma City Stars, and parent team, the Minnesota North Stars. The 1981–82 season was the last for the Stars and the only season the team aligned with the Calgary Flames. When the new CHL organized again in 1992, the revived Blazers finished first in the regular season standings and in 1996 and 2001 won the playoff championship. The team generated exceptional crowds for minor league hockey throughout the 1990s.

The Oklahoma Coyotes, a Roller Hockey International League team, called Oklahoma City home in 1994–95 and 1995–96. At the beginning of the twenty-first century Tulsa hosted an amateur ice hockey team, the Tulsa Crude, in the United States Hockey League and a junior hockey team called the Bazooka Blues. Throughout the life of minor-league hockey in Oklahoma many coaches and players worked their way to the NHL, achieving stardom and winning championships. At the end of the twentieth century communities throughout Oklahoma hosted a growing number of little league and amateur roller hockey leagues that testified to the increased popularity of hockey and hockey-related sports.

The following (as per The Chicago Manual of Style, 17th edition) is the preferred citation for articles:
Larry O'Dell, “Hockey,” The Encyclopedia of Oklahoma History and Culture, https://www.okhistory.org/publications/enc/entry.php?entry=HO002.