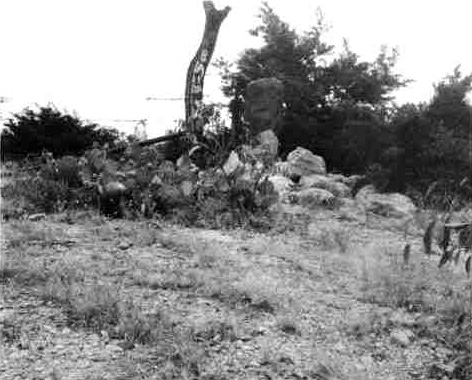 INDIAN MERIDIAN (and Indian Base Line).

The Indian Meridian is located approximately twelve miles west of the 97th Meridian. As provided in treaties between the U.S. government and the Choctaw and Chickasaw nations in 1866, Indian land east of the 98th Meridian was surveyed according to the public land survey system of the U.S. General Land Office. Established in 1785 and first applied to the Northwest Territory, this system of land survey used a mathematically determined method to divide the public domain into standard units called "sections." In Oklahoma the survey into standard units was accomplished in 1870 by E. N. Darling and Theodore H. Barrett. According to the 1871 Report of the Commissioner of the General Land Office, an initial point was arbitrarily selected about one mile south of Fort Arbuckle (at a point approximately six miles west of present Davis, in Murray County). From Initial Point, a north-south line called the Indian Meridian and an east-west line called the Indian Base Line were surveyed across all of present Oklahoma except No Man's Land (the Panhandle). Then the land was surveyed from Initial Point by drawing a series of lines every six miles north and south from the Indian Base Line (township lines) and another series of lines every six miles east and west from the Indian Meridian (range lines). There are twenty-nine townships north and nine south of the Base Line, and there are twenty-seven ranges east and twenty-six west of the Indian Meridian. Their intersections form a grid of blocks measuring six miles square. Within each block are thirty-six one-mile-square blocks called "sections." Using these lines, all land in Oklahoma (except the Panhandle) is surveyed from Initial Point, using Indian Meridian and Indian Base Line as determining factors. After 1866 that portion of the Indian Meridian between the Cimarron and Canadian rivers became the eastern border of the unoccupied public domain called the Oklahoma District. Thus, it became one of the boundary lines from which thousands made the Land Run of 1889 into the Unassigned Lands.

The following (as per The Chicago Manual of Style, 17th edition) is the preferred citation for articles:
Dianna Everett, “Indian Meridian (and Indian Base Line),” The Encyclopedia of Oklahoma History and Culture, https://www.okhistory.org/publications/enc/entry.php?entry=IN012.