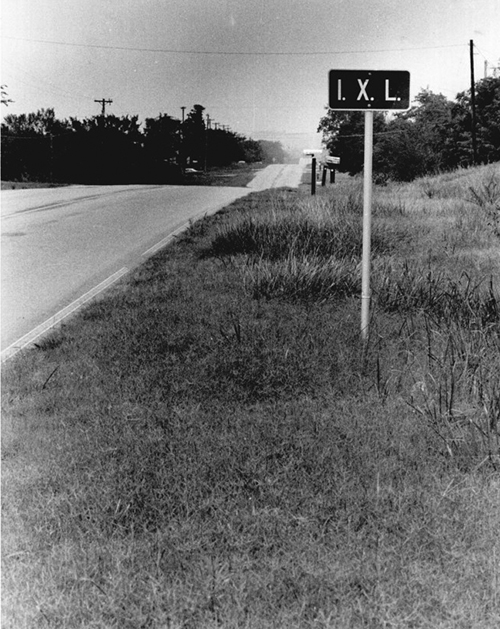 The All-Black town called IXL is located in Okfuskee County in Sections 7, 8, 17, and 18 in Township 12 North, Range 9 East, along State Highway 48, approximately three miles north of the town of Castle and six miles northeast of Boley, which is historically an All-Black town. Castle Township, which surrounds IXL, and Paden Township, its neighbor to the west, were heavily populated with African American farm families at least as early as 1900, as indicated by U.S. Census reports. IXL was the name used to describe a widely dispersed African American community. Various stories attempt to explain the meaning of the name, including that it combined the first letter of the names of three men, or that it stood for "Indian Exchange Land." The four sections of land that comprise the IXL community had a number of allotments to Creek freedmen. IXL Cemetery, in Paden Township, records early-twentieth-century interments of African American individuals whose descendants remained in the area into the twenty-first century.

In 1926–27 a grant of $1,100 from the Julius Rosenwald Fund enabled area families to erect an $11,185 school building to serve IXL District School 12, a separate (segregated) school for grades one through eight. Rosenwald also granted $900 to a $2,350 "teacherage" with room for a faculty of four. The IXL community contributed $600 for the schoolhouse and $500 for the teachers' house. Public school funds paid the balance of cost. The IXL schoolhouse remained an important symbol and a gathering place for the area.

In the last two decades of the twentieth century the IXL community began to coalesce as a true town centered at the intersection of State Highway 48 and County Road East-West 1030. Residents created a fire department and built a three-bay fire station. On October 24, 2001, citizens incorporated a four-square-mile area and set up a town form of government with a mayor and a council. The schoolhouse was razed to make way for a new Community Building erected circa 2012. Town amenities also include a public park and two churches. There are no commercial buildings. The 2010 census credited IXL with a population of 51. "IXL" was also the name of Oklahoma towns in Kay and Tillman counties.

The following (as per The Chicago Manual of Style, 17th edition) is the preferred citation for articles:
Dianna Everett, “IXL,” The Encyclopedia of Oklahoma History and Culture, https://www.okhistory.org/publications/enc/entry.php?entry=IX001.