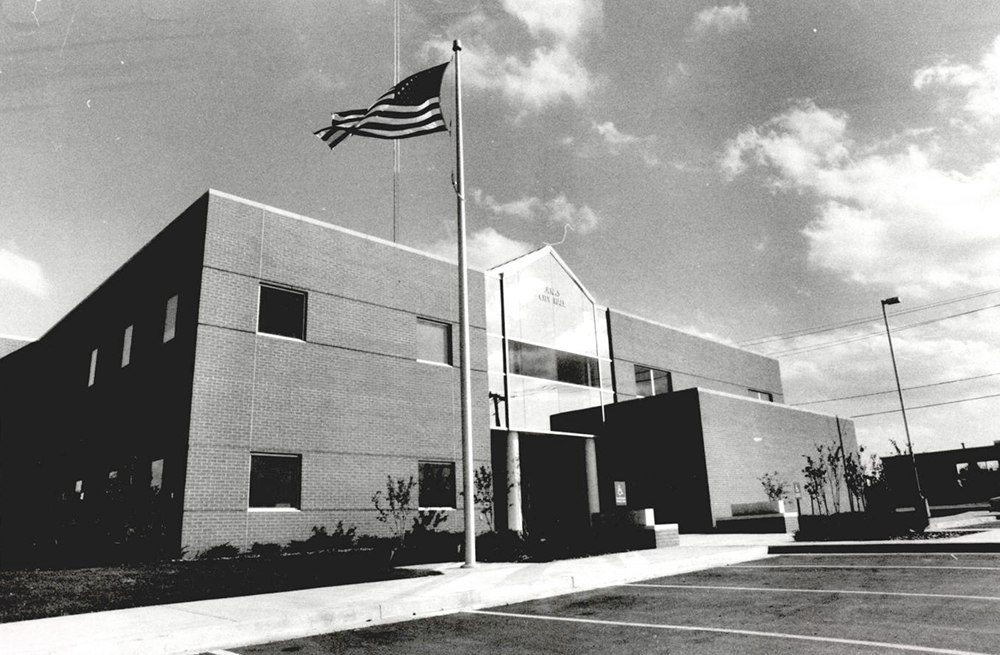 Located on the banks of the Arkansas River in southern Tulsa County, the town of Jenks was officially platted on July 15, 1905. Continued settlement and growth of the town largely stemmed from the Midland Valley Townsite Company. The community served as a weigh station for the Midland Valley Railroad, which stretched from Arkansas through Oklahoma to the Kansas state line. While various stories describe the origin of the name Jenks, the most accepted comes from a 1957 Tulsa Tribune article in which J. H. Hill, an agent for the townsite company, stated that "the Jenks whose name was given the town was a director in the Philadelphia corporation that built the Midland Valley Railroad. The Philadelphia office suggested I name a town for him, so I did."

Early settlers in and around Jenks included small entrepreneurs, farmers, and ranchers, including the Perryman family. As freedmen (members of slave families), they received an allotment of land from the federal government. They established Tulsa County's first homestead, located within the present Jenks city limits. In 1907 the census registered 465 inhabitants. In the following years Jenks experienced population growth from the discovery of oil in the nearby town of Glenpool. As oil fields and tank farms spread, more people moved into the area, assuring the town's future. During this time agriculture also played an increasing role in development. Between 1904 and 1915 cotton became a major trend in the area. By 1923, after the immigration of a sizeable Bulgarian settlement, the trend moved towards vegetable production. The 1920 population stood at 1,508.

While the Arkansas River greatly assisted in Jenks's development, it also proved to be a hazard. Heavy rainfalls resulted in severe flooding on several occasions, including major floods in 1908 and 1923. In response to the problem and in order to protect local residents and businesses, special bond issues were passed in 1945 for the construction of a levee around town. By 1948 the structure reached completion and still protects residents from the high waters that rise during major rainfalls.

From the beginning Jenks Public Schools have played a major role in community life. The first school was organized in 1906. Two years later the Jenks Public School opened, offering a high school diploma in four years. Located off Main Street, it served an increasingly large student population, eventually too many for the facilities. In 1954 a bond issue was placed before the citizens, and by 1955 the school had opened in a new location on land west of the football field. In 1959 a junior and senior high school was completed and remained located at Second Avenue and B Street. From a student population of twenty-seven, the Jenks Schools developed into a district encompassing Jenks and the south Tulsa area and accommodating more than ninety-five hundred students in grades prekindergarten through twelve.

While the school system grew, Jenks's downtown Main Street stores suffered. By 1986 the state had awarded the City of Jenks with a technical assistance grant to study possible revitalization efforts. Hired through the grant, a downtown economic development coordinator was charged with role of recruiting businesses to locate on Main Street. Quickly, antique and collectibles shops began appearing and within two years, Jenks received the title of "Antique Capital of Oklahoma." A population low of 1,026 in 1940 was restored to 1,734 in 1960 and to 6,227 in 1980.

In the 1980s and 1990s the population steadily increased due to the reputation of quality public education and the advantages that only a small city can offer. Coupled with a movement in higher growth trends in the southern part of Tulsa, in the 2000 census Jenks recorded 9,557. In 2010 the population reached 16,926. At the beginning of the twenty-first century residents turned their attention to the river and the potential for development along its banks. The first step toward this goal was achieved on May 28, 2003, with the opening of the Oklahoma Aquarium, offering glimpses of underwater life and intimate views of creatures of the deep. With a mission for education through preservation, the Oklahoma Aquarium became a doorway to new possibilities in economic development. A Kimberly-Clark manufacturing plant also became a major employer. From a small town with ties to the railroad emerged a city one hundred years later, poised to become a major regional destination point. U.S. Highways 64 and 75 and the Creek Turnpike provide surface access, and Richard Lloyd Jones, Jr., Riverside Airport offers air service. Jenks maintains a council-manager form of government.

The following (as per The Chicago Manual of Style, 17th edition) is the preferred citation for articles:
Bridget Davidson, “Jenks,” The Encyclopedia of Oklahoma History and Culture, https://www.okhistory.org/publications/enc/entry.php?entry=JE004.