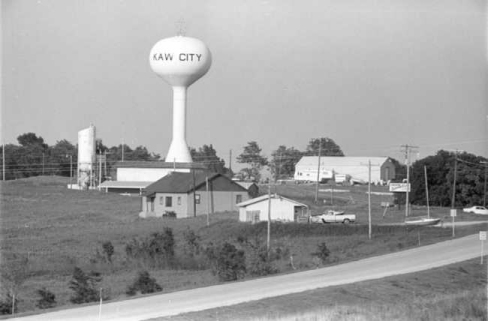 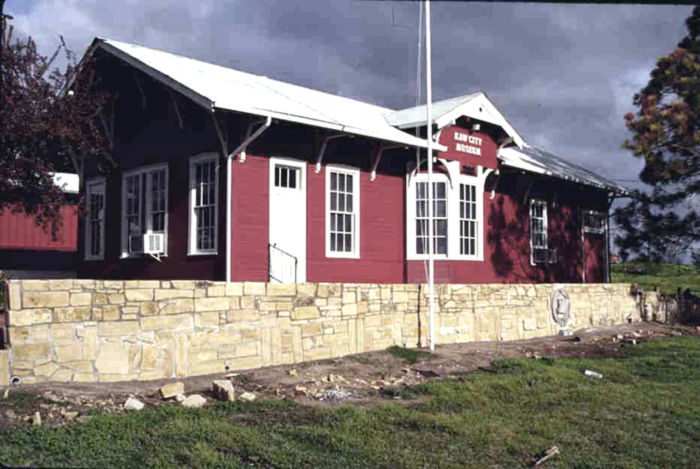 Located in Kay County, Kaw City is situated in the Ox Bow Bend of the Arkansas River twelve miles east of U.S. Highway 77 on State Highway 11. The town was established by the Kaw City Townsite Company, which included William M. Jenkins (fifth governor of Oklahoma Territory), N. F. Frazier, C. W. Carey, and W. E. Brown. The sale of town lots began on July 4, 1902. Advertised as "the finest Townsite in Oklahoma, having as a place for business land as level as a floor with gently sloping upland for residences," it was bordered on the north by the Kaw (Kansa) Reservation and on the east by the Osage Reservation. Situated in a fertile and productive farming and cattle region, Kaw City was connected with outside markets when the Atchison, Topeka and Santa Fe Railway built their line through the town. Completed in 1903, the train depot served as a shipping point for thousands of bushels of corn and other farm produce. Hundreds of carloads of Texas cattle moved through Kaw City into the grazing lands of the Osage Reservation for fattening prior to being transported to market.

From the town's inception, building progressed rapidly. Kaw City soon had a bank, a newspaper, two lumberyards, and a mill. A wagon bridge built across the Arkansas River to the north increased trade from the area known as Kaw Country. A post office was established on September 12, 1902, and a one-room school opened with fifty-six children in November 1902. At 1907 statehood, population stood at 486.

In 1919 a building boom started when oil was struck east of Kaw City. Roads were widened, gas was piped into town, Main Street was paved, old buildings were replaced with new ones, and bonds were passed for a city water and sewer system. The population almost doubled from 627 in 1920 to 1,001 in 1930. In the 1920s Kaw City became internationally known due to the art collection of Laura A. Clubb, wife of a rancher. An avid collector of paintings, she displayed them in her husband's three-story, brick hotel. In order to keep her amassed paintings and rare books intact for the future, Clubb donated them to the Philbrook Museum of Art in Tulsa, Oklahoma.

Kaw City suffered several set backs. In 1923 a flood damaged the business district and destroyed two bridges, of which only one was reconstructed. During the Great Depression numerous businesses closed. At the beginning of World War II many citizens left to join the armed forces and to gain higher-paying, defense industry jobs. The town never regained the status it had once enjoyed. The population dropped from1,001 in 1930 to 561 in 1950.

The next blow came with the construction of the Kaw Dam. A new town site was selected two miles to the west. Surrounded on three sides by water, Kaw City continued to be located in the Ox Bow Bend of the Arkansas River. In 1966 the "old" and "new" pioneers began to build their new city. They moved the Santa Fe depot, which became the Kaw City Museum. The Kaw Nation built a facility for business and to house their historical artifacts. The school, city offices, library, post office, three churches, and several businesses served as the new community's core. At the turn of the twenty-first century Kaw City had 372 residents and an aldermanic form of town government. In 2010, 375 people lived there.

The following (as per The Chicago Manual of Style, 17th edition) is the preferred citation for articles:
Annette Pittman, “Kaw City,” The Encyclopedia of Oklahoma History and Culture, https://www.okhistory.org/publications/enc/entry.php?entry=KA008.