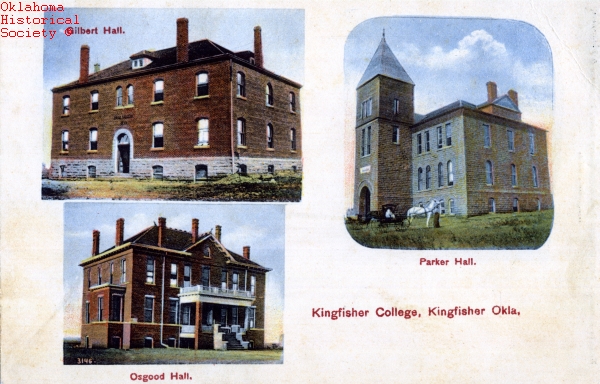 Chartered as the forty-second college in the United States affiliated with the Congregational Church, Kingfisher College was established in Kingfisher, Oklahoma Territory (O.T.), in 1895. Rev. Joseph Homer Parker, who took charge of missionary work in O.T. after the Land Run of 1889, launched a successful fund-raising campaign among eastern benefactors to create Kingfisher Academy. Opened in the church basement, the academy existed from 1890 to 1894. Shortly, the Association of Congregational Churches of O.T. chose Kingfisher as the site for a college. Chartered in September 1894, Kingfisher College opened on September 2, 1895, in the town's former Central Hotel. In fall 1898 Parker Hall opened one mile east of town as the first campus building.

Kingfisher College did not exclusively embrace the Congregational colleges' mission of providing an educated ministry for their churches. Of the institution's aggregate 117 graduates, approximately twenty were engaged in religious work. By offering classes from grade school through high school, administrators hoped to encourage students to continue at Kingfisher College. Although the facility lacked up-to-date equipment and supplies, students excelled. In the school's history, six students qualified for the Rhodes scholarship, with three winning the prestigious honor.

Kingfisher College experienced steady enrollment growth until the United States entered World War I in 1917. Enrollment fell sharply, and the school never recovered its prewar status. Declining donations coupled with free tuition offered at nearby public higher education institutions, such as Central State Normal College in Edmond and Oklahoma A&M College in Stillwater, further contributed to the financial problems. The first president, Julius Temple House, an adept fund raiser, resigned in 1908. The trustees were forced to close the doors in August 1922. They sold the campus to the Pentecostal Holiness Church, which opened King's College there until 1932. The site of Kingfisher College was listed in the National Register of Historic Places in 1976 (NR 76001566).

In 1927 the trustees negotiated an agreement whereby Kingfisher College's academic records and library holdings were transferred to the University of Oklahoma. In 1951 a thirty-thousand-dollar endowment established the Kingfisher College Chair of Philosophy of Religion and Ethics at the university, and in 1964 the trustees transferred the college's endowment fund there.

The following (as per The Chicago Manual of Style, 17th edition) is the preferred citation for articles:
Carolyn G. Hanneman, “Kingfisher College,” The Encyclopedia of Oklahoma History and Culture, https://www.okhistory.org/publications/enc/entry.php?entry=KI011.