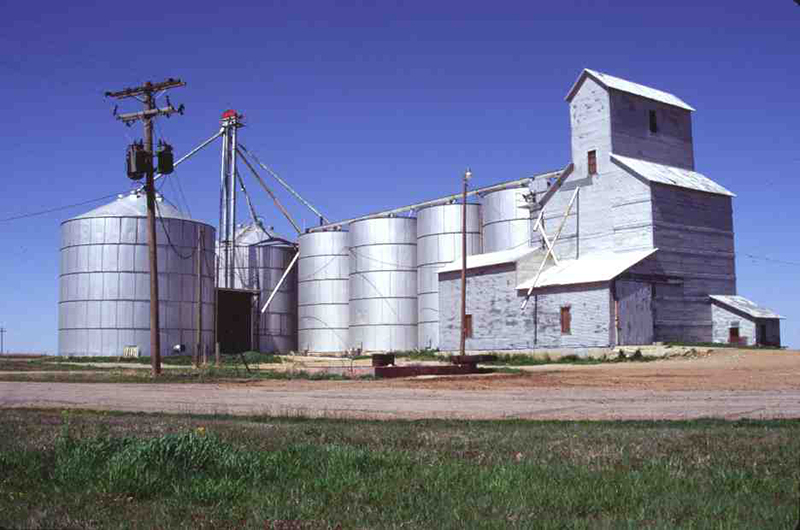 The town of Knowles in Beaver County began as Sands City and was incorporated by Frances and Allie Knowles on December 27, 1906. The original location was on the southeast quarter of the northwest quarter of Section 25, Township 5 North, Range 26 East of Cimarron Meridian. A townsite company was formed on February 15, 1907, by Dr. A. J. Sands, G. W. Meyer, W. L. Detwiler, and Francis E. Knowles. Sands was the only doctor in the vicinity at that time, hence the name of the original town. Fred Wells operated a small grocery and family store in his home and later moved it into a small building nearby. In 1907, when Sands City's townsite was actually surveyed and platted, he moved his store to the new area. Other businesses included a hardware store, a livery stable, a two-story hotel, a real estate office, a print shop, and a newspaper called the Farmers' News. There was also a blacksmith shop, a justice of the peace, and a horse-drawn mobile photo gallery with living quarters attached.

By 1911 the community comprised an estimated fifty-two residents. Sands City and its schoolhouse was the nucleus of the area's church, school, and social life. In 1907 a postal designation as Knowles was approved by the Post Office Department. The name honored the Knowles family, as Alice Knowles Lundy was the first postmaster. This caused great confusion, because the town was named Sands City, but the post office was called Knowles.

However, the arrival of the Wichita Falls and Northwestern Railway in 1912 eliminated the confusion. A new townsite was platted in the quarter section adjacent to Sands City on the north, and buildings were moved there to be closer to the railroad. The town's name was changed to Knowles. There had been a building site sale, and lots were sold for homes and other interests purchased property along the railroad. The main intersection was at Main Street and Broadway.

New businesses included the Sappington Grain Company, Cooley and Richfield Grain Company, the Farmers' Elevator, a broomcorn shed, and a wood-frame icehouse. Magnolia Oil Company had storage tanks and a loading dock for barrels and cans. The railroad built stock pens, drilled a water well, and erected a depot. In 1913 the new Whitehouse Hotel was built. Another hotel was the Gambs. Jessie Hamilton operated the Fort Supply Telephone Company's Knowles exchange. The Farmers' State Bank, established by W. Guy Parker from Alva, Oklahoma, was an important part of the new town. In 1912 Zella Alkire quit teaching, took the state pharmacy examination, and established a drug store. She shortly thereafter married a newly arrived doctor, Charles Rogers. He practiced in Knowles until 1921. The next year Dr. A. L. Nichols arrived to establish his practice in one of the hotels. A Dr. Maine also practiced.

When the railroad closed its line to the Oklahoma Panhandle in the early 1970s, Knowles began to wither. In 2000 only two enterprises and an elevator operated in the once-prosperous town. A nearby ranch family donated a community building where descendants of the early pioneers meet for dinners and entertainment. Knowles is situated on U.S. Highway 64 between Gate and Forgan. The 2000 population was 32, but in 2010 the census reported only 11 inhabitants. The Knowles Grain Elevator is listed in the National Register of Historic Places (NR 83002069).

The following (as per The Chicago Manual of Style, 17th edition) is the preferred citation for articles:
V. Pauline Hodges, “Knowles,” The Encyclopedia of Oklahoma History and Culture, https://www.okhistory.org/publications/enc/entry.php?entry=KN001.