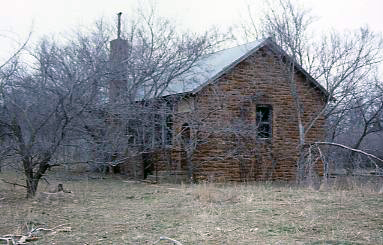 The incorporated town of Lamar is situated in Hughes County on County Roads E1320/N3870, approximately seventeen miles east of Holdenville, the county seat. After the Missouri, Oklahoma and Gulf Railway (later the Kansas, Oklahoma and Gulf Railway) constructed a line in 1907 connecting Dustin and Calvin, the Lamar community developed midway between the two towns. A post office was established on July 23, 1907. On September 14, 1907, J. R. Luttrell published the first issue of the weekly Lamar News. Two years later Lamar had a bank, a livery, a cotton gin, a lumberyard, a tin shop, a hardware store, and five general stores. In 1909 R. L. Polk's Oklahoma State Gazetteer and Business Directory estimated that Lamar had a population of five hundred. Citizens passed a ten-thousand-dollar bond issue in May 1909 for the construction of a two-story, brick school building, completed in May 1910. By 1918 the surrounding agricultural area supported two cotton gins, two blacksmith shops, a bank, four general stores, and sundry other businesses. With an estimated population of 350, citizens attended the Baptist and Methodist churches and read the weekly newspaper, the Lamar Sun.

On July 5, 1922, Lamar became a consolidated school district. In October of that year citizens voted by a margin of two to one to incorporate the town. After the Bank of Lamar voluntarily liquidated on December 12, 1928, residents conducted their banking in Holdenville. During the 1940s and 1950s the town supported several groceries and gas stations.

The first federal census for Lamar reported a population of 250 in 1930. The number peaked at 296 in 1940. By 1950 it had declined to 180 and continued on a downward spiral to a low of 97 in 1990. At the turn of the twenty-first century Lamar served as a "bedroom" community for 172 residents, the majority of whom commuted thirty to forty-five minutes to work. The 2010 census recorded 158 inhabitants.

The following (as per The Chicago Manual of Style, 17th edition) is the preferred citation for articles:
Linda D. Wilson, “Lamar,” The Encyclopedia of Oklahoma History and Culture, https://www.okhistory.org/publications/enc/entry.php?entry=LA011.