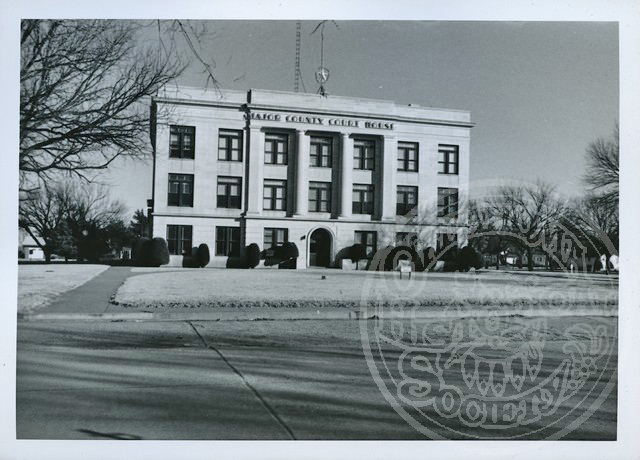 Located in northwestern Oklahoma, Major County was established from the southern part of the territorial Woods County at 1907 statehood. Bounded by Woods and Alfalfa counties on the north, Garfield County on the east, Kingfisher, Blaine and Dewey on the south, and Woodward on the west, Major County has 957.87 square miles of land and water. It is drained by the North Canadian and Cimarron rivers and by Eagle Chief, Griever, and Sand creeks. Major County was part of the Cherokee Outlet and opened to non-Indian settlers on September 16, 1893. The eastern half of the county lies in the Red Bed Plains (subregion of the Osage Plains) and the western half in the Gypsum Hills. Major County is home to two noted geological formations: the Glass (Gloss) Mountains, an outcropping of buttes that is part of the Blaine Escarpment, a large gypsum formation extending across much of western Oklahoma, and the Ames Structure, which is buried under 3,000 meters of sand and soil and is possibly the result of a meteorite impact. The county seat is Fairview, so named for its beautiful view of the Glass Mountains to the west and the Cimarron River to the east. At the turn of the twenty-first century other incorporated communities included Ames, Cleo Springs, Meno, and Ringwood.

Although the area's prehistory has been little investigated, according to a 1981 archaeological survey report Major County had thirteen known archaeological sites. Representative of these are the Barnum site, a well-preserved camp probably from the Archaic period (6000 B.C. to A.D. 1) and the Davis site, possibly a village site of the Plains Village period (A.D. 1000 to 1500). The Osage, Kiowa, Comanche, and other Plains Indians utilized the area as hunting grounds. One of the first traders and explorers in the area was Thomas James. In 1821 James, who wanted to establish trade in Santa Fe, traversed westward along the Cimarron River. In 1843 explorer Nathan Boone may have passed along the western boundary of the future Major County.

The county was named for John Charles Major, county resident and representative to the state's 1906 Constitutional Convention. Although the 1893 land opening attracted settlers from many states and foreign countries, the largest concentration to settle in present Major County came from Kansas, including large groups of Mennonite Brethren from that state. The Mennonites settled in various communities and started the first organized churches in the area. In fact, the town of Meno received its name from Dutch Anabaptist Menno Simons (1496–1561), early leader of the movement that came to be called Mennonite. Settlers quickly established churches, which became the focal point of the area's social life. By 1900 organized churches included Methodist, Baptist, Presbyterian, and Christian, and by 1907 statehood many churches in Ames, Cleo Springs, Fairview, Meno, and Ringwood had full-time pastors.

As railroads came through the area in the early twentieth century, small communities swelled, sometimes doubling their populations in a few months. However, this rapid growth did not translate into the long-term establishment of industries or other economic activities that could sustain the newly transplanted settlers. At 1907 statehood the census stood at 14,307. In 1910 the population peaked at 15,248. The county had a sharp decline in population to 12,426 in 1920. Since that time the county has experienced a steady drop in population to 7,529 reported in 1970 and to 7,527 in 2010. In 2010 the population was 91.0 percent white, 2.0 percent American Indian, 0.4 percent African American, and 0.3 Asian. Hispanic ethnicity was identified as 7.5 percent.  The incorporated towns have not shown the same trend, however, and census figures show the populations in these locales to have waxed and waned significantly over the course of the last one hundred years. For example, Meno, the population of which was 69 in 1910, rose to 96 in 1930, reached its second highest point of 180 in 1940, plummeted to 76 by 1950, and has grown steadily since to a high of 235 in 2010.

Railroads, wheat production, cattle ranching, poultry processing, and oil and gas exploration have played a role in Major County's economic fortunes. Mike Hallren founded the Hallren Poultry and Creamery in Fairview in 1936, and by the late 1950s it was the county's largest employer. In the 1930s a cotton gin, a flour mill, two creameries, and several grain elevators supported the local farmers. The Ames Structure and the Ringwood oil field have been sites of significant oil and gas production. The Ames Structure area at one time had sixty-five wells in production, and in 1952 Warren Petroleum Corporation opened a refinery in Ringwood that produced both gasoline and liquefied petroleum gas products. At the time, that facility was Major County's second-largest employer. In the early 1960s civic leaders hoped to develop a distribution center for various goods in the county to help secure its economic future.

Early transportation routes followed the waterways and the American Indian trails. At the turn of the twentieth century several railroads constructed lines through Major County. Between 1901 and 1902 the Enid and Anadarko Railway (later the Chicago, Rock Island and Pacific Railway, CRI&P) built a line from Enid (Garfield County) to Greenfield (Blaine County) that passed through Meno and Ringwood. The Choctaw Northern Railroad (later the CRI&P) connected Cleo Springs with outside markets in 1902. In 1903 the Kansas City, Mexico and Orient Railway (later the Atchison, Topeka and Santa Fe Railway) constructed a line from the Kansas-Oklahoma border to Cleo Springs and Fairview. Modern motorists used State Highways 8 and 58 and U.S. Highways 60, 281, and 412. A municipal airport was located at Fairview.

Although Major County did not experience the lawlessness of other frontier areas, outlaws Dick Yeager and Ike Black used caves in the Glass Mountains as their hideout during the county's early history. County residents continue to tell the story of the outlaws' demise at the hands of a large posse of farmers in the summer 1894. Other prominent events in the county's history include repeated floods caused by the Cimarron River and the "Black Sunday" dust storm of April 14, 1935. The Major County Historical Society Museum in Fairview offered exhibits relating to local history. Outdoor enthusiasts enjoyed Glass Mountain State Park. Major County Courthouse was listed in the National Register of Historic Places (NR 84003153).

The following (as per The Chicago Manual of Style, 17th edition) is the preferred citation for articles:
Ross Peterson-Veatch, “Major County,” The Encyclopedia of Oklahoma History and Culture, https://www.okhistory.org/publications/enc/entry.php?entry=MA006.