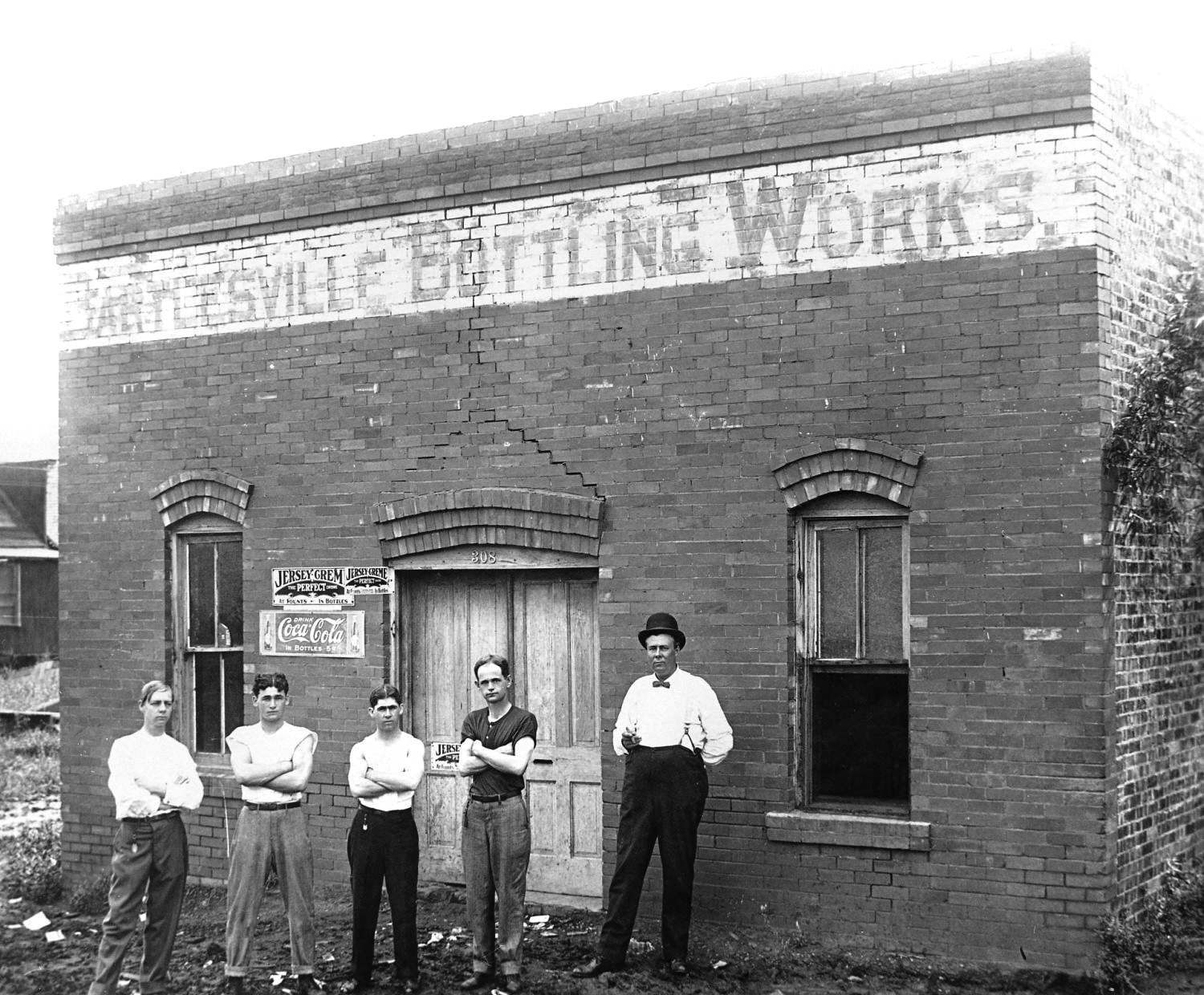 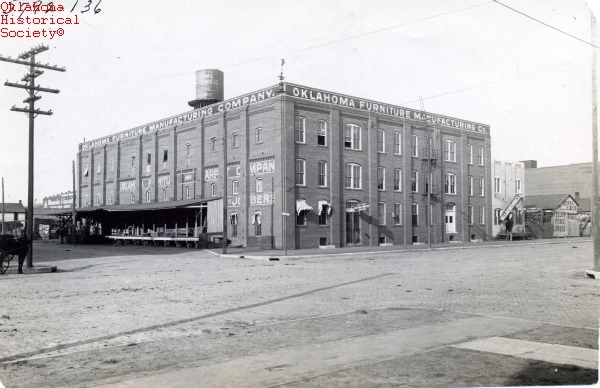 Although during the twentieth century and into the twenty-first Oklahoma's economy has been based on agriculture, manufacturing has always played a role. Oklahoma has been most widely known for its extractive industries, particularly coal, lead and zinc, and petroleum, but under the heading of "manufacturing," defined as the creation of "value added" products, a considerable number of industries have successfully operated since the late nineteenth century. The availability of raw materials has stimulated some of these. For example, the clay products industry, which involves making bricks, pottery, and tile, and the lumber industry flourished from the late Territorial Era through the twentieth century. Beginning with the 1889 land run and continuing with successive openings, an available work force grew larger, and around the turn of the century railroads' rapid development enabled the movement of raw materials and finished products throughout and into and out of the territory and state. Most goods made in Oklahoma were shipped to consumers elsewhere in the nation.

In the last half of the nineteenth century most residents of Indian and Oklahoma territories were involved in agriculture. Still in its infancy, manufacturing was characterized by semi-cottage production, or "hand work," that met local needs. Therefore, it was widely dispersed, with most towns having a newspaper, a flour mill, a tinsmith, a brick factory, a bakery, a boot and saddle maker, a cigar maker, a milliner, and so on. As the twentieth century progressed, industry became more diversified and technological, requiring larger facilities, or plants, with equipment and teams of managers and laborers. By 1899 only 495 manufacturing establishments existed. However, as the region developed, their numbers increased 200 percent from 1899 to 1904 and 119 percent from 1904 to 1909.

Within two years after 1907 statehood the Bureau of the Census conducted a survey of manufactures, assessing Oklahoma's industrial production and describing the characteristics of its workers. There were 2,310 establishments involving 18,034 individuals (including 2,700 owners and 13,000 wage earners). These plants had a capital investment of $38.6 million and produced a total value of products of $53.6 million. Oklahoma ranked thirty-ninth and fortieth of forty-eight states, in the number of establishments and workers. By contrast, the value of Oklahoma's agricultural crop output in 1910 was $133.4 million, ranking twenty-second in the nation.

In addition, industry was becoming centered in larger communities, and goods were produced for statewide and national markets. In the 1909 census survey 21 percent of all manufacturing was done in just eight cities; Oklahoma City led with 171 establishments. The other seven, in order of magnitude, were Enid (65), Muskogee (64), Tulsa (53), Shawnee (40), Guthrie (34), Chickasha (30), and McAlester (29). Those cities had a total of 19.3 percent of the state's population but created 37.3 percent of its manufactures.

That being said, it is instructive to note the types of industries that provided jobs for those 18,034 Oklahomans (of a total population of 1,657,155) in the first two or three years of statehood. In numbers of employees, the five leading industries were lumber and timber processing (3,175 workers), printing and publishing (1,008), flour milling and gristmills (842), brick and tile makers (730), and cottonseed/oil milling (581). In numbers of employers, the top five were the printing and publishing industry (598 plants), the lumber and timber industry (324), the flour mill and gristmill industry (295), the baking industry (252), and the artificial stone industry (129). Work could also be found in other businesses: manufactured-ice plants (77), foundry and machine shops (64), copper, tin, and sheet-iron makers (62), cut marble and stone producers (41), cottonseed/oil milling (39), brick and tile factories (38), broom factories (23), carriage and wagon makers (19), dairies (19), leather shops (15), refineries (9), and meat-packing plants (7).

In value of products, however, agriculture-related manufacturing predominated in 1909–10. The flour milling industry was by far the most productive, its 295 plants and 842 workers accounting for $19 million of the state's total $53 million industrial output. Exemplary was John Kroutil's Yukon Mill and Grain Company, begun in 1902, and Shawnee Milling Company, which began as a roller mill in 1906. In 1891 Kingfisher had twelve flour mills. By 1950 thirty-eight flour mills operated in the state. By comparison, in 1909 second place was cottonseed-oil milling, with 39 plants, 581 workers, and a $5.1 million output. In 1909 the meat-packing industry was the United States' leading industry in value of products. In Oklahoma that year there were seven slaughterhouses and packinghouses, whose products were valued at $889,000, a 200 percent increase over 1904. The state's meat-packing industry expanded after 1910 when major installations in Oklahoma City were made by Wilson, Armour, and other packers, and by midcentury the two remained the state's largest. The broom-making industry also thrived in the early twentieth century. By 1939 Oklahoma was the nation's largest producer of broomcorn and provided half of the nation's supply. At that time there were six broom factories.

In the early years before and after statehood the printing and publishing industry was one of the state's most uniformly widespread, informing the citizenry of local, state, and national news and aiding the retail sales industry. The 598 printing plants that existed in 1909 produced one and sometimes two or three local newspapers in virtually every small town. Printing and publishing remained one of the state's leading industries, but by 1929 the number of plants had shrunk to 216, and local papers went out of business during the Great Depression. At that time the industry ranked fifth in numbers of workers. By 1954 the number had resurged to 382. In that year the industry ranked only seventh in the numbers of employees earning their living in it. By 2001 it ranked second in the number of establishments, 419, and but eighth in number of workers, 5,619.

Over the century the fabricated metal products industry grew in significance and became characterized by tremendous variety. In 1910 it was narrowly defined as "foundries and machine shops," and its sixty-four plants employed only 587 workers. However, the oil boom and other economic developments increased the activity in the metal products sector. Petroleum-related manufacturing has included tanks made by Black, Sivalls and Bryson and by others. These enterprises took premanufactured sheets of steel and stamped and perforated them for construction of standardized oil-field storage tanks. Various companies have made oil-field "fishing tools," including the Muskogee Tool Company and Hinderliter Tool Company of Tulsa. From 1910 the Boardman Company of Oklahoma City made steel items such as hoisting engines, livestock water tanks, and cotton-drying machinery. J. B. Klein Iron and Foundry Company, established in Oklahoma City in 1909, fabricated bridges, buildings, and other large structures. Also exemplary are Maloney-Crasford Tank and Manufacturing Company, established in 1915 in Tulsa, George W. Failing Supply Company of Enid, makers of portable drilling units, Halliburton Oil Well Cementing Company of Duncan, makers of oil-field equipment, and John Zink Company, founded in Tulsa in 1929 to make combustion units for the petroleum industry.

In 2001 the fabricated-metal products industry had 962 plants making metal windows and doors, boilers, tanks, shipping containers, metal valves, and numerous other products. Employing almost twenty-eight thousand, fabricated metal was the state's largest manufacturing industry. A related category, machinery manufacturing, was second, with more than twenty-four thousand workers in 407 facilities. Among those were Perry's Charles Machine Works, maker of Ditch Witch construction equipment, and Ponca City's Nickles Industrial Manufacturing Corporation, makers of gas and diesel engine parts. Primary metal manufacturing, including lead and zinc smelting and refining, has also been significant. Sheffield Steel, a steel castings plant, opened in Sand Springs in 1929, was bought by Armco Steel in 1963, and soon expanded into the nation's largest castings plant. Employing five hundred, it operated through the twentieth century and was one of ten such facilities in the state.

Textiles have also been produced in Oklahoma. However, despite the prevalence of cotton as an agricultural crop, most of that raw material has been shipped elsewhere. A few textile mills have operated, but most in the industry were textile product mills, using ready-made cloth to make apparel and other such goods. In the early part of the twentieth century Pioneer Mills operated in Guthrie. Commander Mills, established in Sand Springs in 1923, first produced thread and cloth. In the 1930s the plant purchased nearly a half-million dollars of locally grown cotton and employed five hundred. By the 1980s it was a product mill that finished sheets and pillowcases. Items that have been made in Oklahoma include blue jeans, women's clothing, shirts, men's work clothes, and ladies' undergarments. In 1947 apparel plants numbered 36 and employed 855, and in 1954, 55 establishments employed 2,369. By 2001, 27 textile mills, 64 textile product mills, and 105 apparel manufacturers operated, with a total employment in excess of five thousand.

Glass manufacturing, airplane manufacturing, and the automotive industry, including automobiles, tires, and parts, were active from the early twentieth century. By 2001 the nonmetallic mineral industry, with 268 plants including glass factories, ranked fourth in numbers of plants and with 7,902 workers, seventh in employees. The aerospace manufacturing presence, represented by sixty firms (seven of which assembled aircraft), employed more than six thousand. Automotive manufacturing, part of the transportation equipment industry, ranked seventh, with 221 plants, but third in numbers of workers, twenty-one thousand. Thus by the end of the twentieth century these types of activities had assumed a larger role in the economy.

The electronics industry also has a half-century history in the state. In 1961 Western Electric opened a telecommunications equipment plant in Oklahoma City. The plant was later operated by AT&T, Lucent Technologies, and Celestica and employed as many as four thousand before closing in 2003. Lowrance Electronics, makers of depth finders, moved from Missouri to Tulsa in 1965. Hitachi Computer Products and Seagate Technology also exemplify electronics and technology manufacturing in Oklahoma around the turn of the twenty-first century. In 2001 computer and electronics manufacturers numbered 122 and employed more than ten thousand, making it the sixth-largest source of industrial jobs.

While manufacturing has not been the major emphasis in the state's economic history, industry in general has experienced steady growth and diversity over the last half of the twentieth century. In 1910 only 11 percent of Oklahoma workers were involved in manufacturing. By 1929 1,658 plants employed 31,695 workers, or 16.9 percent of the state's work force. By 1950 manufacturing workers comprised 11.4 percent, and by 1975, 16.9 percent. By 1975 the greatest concentration of manufacturing was in Tulsa and Oklahoma counties, where 60 percent of plants were located; the other 40 percent were scattered in sixty-six counties. That pattern remained consistent through the end of the century, despite the efforts of small and medium-sized towns' chambers of commerce to attract industry. By 2001 the state had 4,025 manufacturing establishments employing 163,256 workers of the total 1.2 million wage earners, or approximately 13 percent. The largest sector was the fabricated-metal products industry, with 962 plants employing approximately twenty-eight thousand. Others in manufacturing's top four were machinery, employing 24,473, transportation equipment, 21,000, food processing, 14,910, and plastic and rubber products, 14,424.

The following (as per The Chicago Manual of Style, 17th edition) is the preferred citation for articles:
Dianna Everett, “Manufacturing,” The Encyclopedia of Oklahoma History and Culture, https://www.okhistory.org/publications/enc/entry.php?entry=MA017.