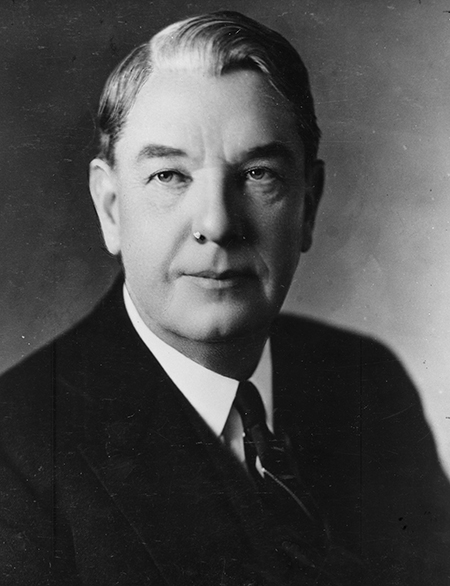 Oklahoma governor and U.S. representative Ernest W. Marland was born in Pittsburgh, Pennsylvania, on May 8, 1874, the youngest and only boy of the eight children of Alfred and Sara Marland. He attended private and public schools in Tennessee and Pittsburgh and graduated with a law degree from the University of Michigan Law School at the age of nineteen. Within two years of graduation he began practicing law in Pennsylvania.

The Pittsburgh of 1895, where young Marland started his career, was an exciting place. The coal industry, long a mainstay of the region, had recently been augmented by a series of oil booms. The young lawyer quickly became involved in a series of coal and oil promotions that soon made him a small fortune. In the midst of this frenetic speculation he met Mary Virginia Collins, the daughter of a Philadelphia court stenographer, and on November 5, 1903, they were married. That first fortune, made so quickly on speculation, was soon lost in the Panic of 1907.

Marland simply borrowed money and started his next venture. It came when a relative introduced him to the Miller brothers whose famous 101 Ranch lay near Ponca City, Oklahoma. In 1908 E. W. journeyed there and immediately decided that the surface geology indicated oil. He raised capital from financiers back in Pennsylvania and began drilling. In 1910, after drilling seven dry holes, he made the first discovery. As one success led to another, Marland formed several companies, including the 101 Oil Company, the Kay County Gas Company, and a number of others until finally, in 1921, he consolidated all his oil ventures as the Marland Oil Company.

The rapid expansion of his oil business forced the newly made millionaire to borrow large amounts of capital from New York bankers. By 1928 this practice had accelerated until control of the company was wrested from him by the bankers, who changed the name of the company to the Continental Oil Company, or as it is better known, Conoco. Meanwhile, Marland was given a figurehead role with the operation, and by the early 1930s he had lost his fortune.

During the years he was building his oil empire, E.W. Marland indulged in a lavish lifestyle that made him well known as a social and philanthropic leader in Oklahoma. His companies were noted for providing the best employee benefits in the state. Marland showered Ponca City, where Marland Oil Company was headquartered, with gifts, including a hospital, city parks, and numerous donations for civic improvements and to local charities. Perhaps the best known of those activities was the commissioning of the Pioneer Woman statue.

During this time he built a lavish mansion in Ponca City where he resided with his wife, Mary, and their adopted children, George and Lyde. The Marland mansion became the focal point of extravagant social activities that included English style fox hunts, polo, numerous soirees of all kinds, and an almost continuous round of high-stakes poker games. In 1926 Mary died after a long illness, and Marland married his adopted daughter, Lyde.

Agitated by the loss of his oil empire and resulting bankruptcy, which Marland blamed on an uncontrolled banking industry, E. W. changed his political allegiance from Republican to Democrat and entered politics. In 1932 he was elected U.S. representative from the Eighth District. His congressional efforts focused almost exclusively on a series of bills designed to curtail banking activities that he felt exerted undue control over the national economy. During his stint in Congress he also became a staunch supporter of the New Deal policies of Pres. Franklin D. Roosevelt. In 1934 Marland declared for the office of governor of Oklahoma. Running on a slogan of bringing the New Deal to Oklahoma, he won a close primary struggle but generated an overwhelming victory in the general election.

The Marland administration was marked by a contentious relationship between the governor and the state legislature, revolving around the governor's determination to bring a total relief package to the state and the conservative legislature's concern over the cost of such a large undertaking. Slow action on his proposals prompted the governor to appeal directly to the citizens by means of two statewide radio broadcasts and a speaking tour. These actions created greater difficulties with the legislature and further slowed relief efforts for the people of Oklahoma, who were suffering from the twin calamities of an economic depression and a devastating drought. To further exacerbate his political problems the governor made an unsuccessful attempt to run for the U.S. Senate in the midst of his term as governor.

Ultimately, his administration is credited with getting only a small portion of the New Deal programs needed by the state. However, he did get a strong educational support package implemented as well as establishing the Oklahoma Department of Safety and its Highway Patrol. Marland's lack of political skills combined with obvious personal ambition made his term as governor of Oklahoma largely ineffective.

E. W. Marland left office in January 1939, returned to Ponca City, and began trying to rebuild the Marland Oil Company. In 1940 he made an unsuccessful bid for the U.S. House of Representatives. By this time he was in failing health that culminated in a heart condition. He died October 3, 1941.

The following (as per The Chicago Manual of Style, 17th edition) is the preferred citation for articles:
Bobby D. Weaver, “Marland, Ernest Whitworth,” The Encyclopedia of Oklahoma History and Culture, https://www.okhistory.org/publications/enc/entry.php?entry=MA027.