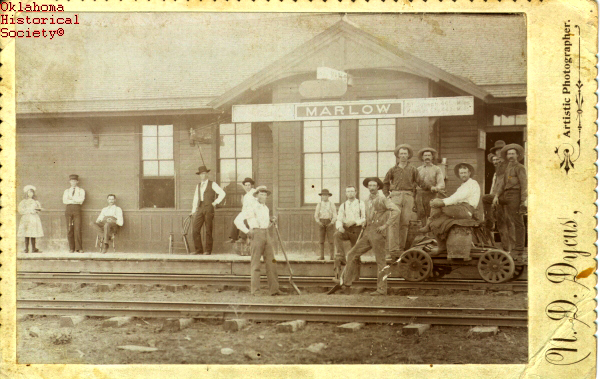 Marlow is situated due north of Duncan about ten miles and twenty-eight miles south of Chickasha on U.S. Highway 81. Prominently located in the northwestern quarter of Stephens County, the community is also crossed by State Highway 29, which now extends eastward through northern Stephens County and historically connected on the west side with Lawton after a short jog southward along U.S. 81. The famed Chisholm Trail crossed through the area, bringing settlers to the vicinity, including A. B. Smythe, who built a house and store on the present site of Marlow in the late 1880s. The city, however, was named for the Dr. Williamson Marlow family, who also settled in the area in the early or mid-1880s. Along with Dr. Marlow and his wife came six of their children, five of them being boys named Boone, George, Alfred, Charles, and Lewellyn.

The Marlow Brothers have long been the most famous of Marlow's residents, although the town came into existence after their exploits. U.S. deputy marshals arrested four of the brothers in August 1888 in Texas for suspected horse thievery, despite any proof of wrongdoing. While the brothers were being transported to trial in January 1889, a mob attacked them. As the lawmen fled, two of the brothers, Alfred and Lewellyn, were killed. The other two, George and Charles, repelled the mob despite being chained to their dead brothers. The brothers were subsequently exonerated and heralded for their actions in defending their lives against lynching. Although the Marlow family had already moved from the area when the incident happened, it is immortalized in song, poetry, and film and in town history at Marlow's Red Bud Park, constructed on the original homestead of the Marlow family.

The Marlow post office was established in March 1891, and the Chicago, Rock Island and Pacific Railway constructed their major east-west line through the town in 1892. The town incorporated in 1898, the first town on the Rock Island line south of Chickasha to do so. Noted for its alfalfa, corn, hogs, watermelons, and other fruit, Marlow blossomed, so that by 1908 there were sixty business houses in town. In addition to these, the community supported a cement and plaster mill, three lumberyards, three cotton gins, two grain elevators, two brick plants, and six churches. By this time residents also enjoyed local and long distance telephone service and electric lights provided by their own electric light and waterworks plant. A further distinction for the town was conferred in 1908 when the town of Marlow became a city of the first class. In the late 1910s cotton and broomcorn joined the list of top agricultural exports from the Marlow area, with all crop production more than quadrupling between 1916 and 1919, and the city was thriving. In 1946 local industries included a meal-flour-feed mill, two cotton gins, a bakery, and a mattress factory, among a host of other commercial enterprises.

Slightly diversifying Marlow's economy were oil and gas drilling activities, which by the 1930s focused on wells northeast of town. However, Marlow remained more a farming community through the decades, with oil and gas drilling a viable but lesser economic force. Currently, beef, wheat, alfalfa, peanuts, and milo are important crops, and the city continues to support a variety of retail establishments and restaurants. Also affecting development in Marlow in more recent decades has been its proximity to Duncan. With many residents working in the larger city, particularly for the gigantic oil-field equipment manufacturer Halliburton Energy Services, Marlow has experienced many of the economic ups and downs of its neighbor.

Marlow has had only two newspapers in its history. The Marlow Magnet was published in the 1890s, and by 1905 the Marlow Review had started publication. The Review continued to serve the community into the twenty-first century.

The following (as per The Chicago Manual of Style, 17th edition) is the preferred citation for articles:
Cynthia Savage, “Marlow,” The Encyclopedia of Oklahoma History and Culture, https://www.okhistory.org/publications/enc/entry.php?entry=MA028.