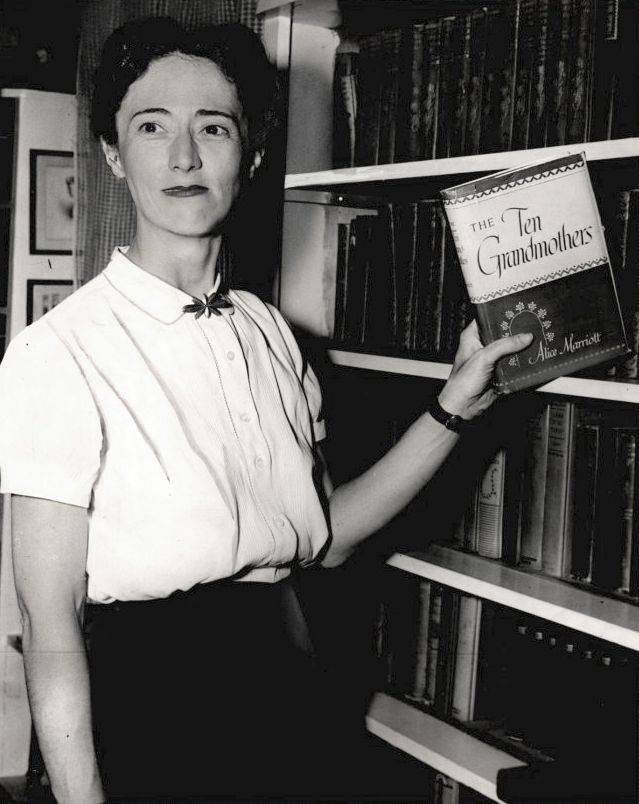 Anthropologist Alice Lee Marriott was born January 8, 1910, in the Chicago suburb of Wilmette, Illinois. At the age of seven she moved with her family to Oklahoma City for job opportunities. Her father, Richard, was treasurer of an insurance company and her mother, Sydney, worked as a certified public accountant.

In order to save money during the Depression, Marriott lived at home as she pursued a college degree at nearby Oklahoma City University. In 1930 she graduated magna cum laude with a double major in English and French. For the next two years she worked at the Muskogee Public Library, cataloging Five Tribes books as part of a special Works Progress Administration project. She received a second bachelor's degree in 1935 from the University of Oklahoma, as the first woman graduate of the anthropology program. Her fieldwork had taken her to southern Oregon to work with Modoc people and to southwestern Oklahoma to research the Kiowa people.

From 1936 to 1942 Marriott served as the Oklahoma field representative for the Indian Arts and Crafts Board (IACB), a U.S. Department of the Interior program designed to revitalize Native economies through the production and marketing of American Indian arts. She made initial surveys of American Indian communities in Oklahoma. Her reports detailed not only arts and crafts but also the tribes' living and economic conditions, customs, traditions, and beliefs. She worked with American Indian artists at the American Indian exhibition in the federal building at the World's Fair in San Francisco in 1939. For example, she drove Mary Inkanish and her husband from Oklahoma City to San Francisco to attend the fair to demonstrate the methods of creating moccasins and beadwork. Marriott considered her job with the IACB to be "heaven."

Marriott's goal as a writer was to craft lively and engaging books on American Indian history that would appeal to a general audience. She is best known for two books, The Ten Grandmothers (1945) and Maria: The Potter of San Ildefonso (1948). The Ten Grandmothers tells short stories of Kiowa history from the 1840s to World War II. Maria is a biography of Maria Martinez, a San Ildefonso, New Mexico, potter who became famous for her black-on-black ware.

Marriott continued to work as a freelance writer and consultant throughout her life, often collaborating with archaeologist Carol Rachlin. Both Marriott and Rachlin taught creative writing and folklore at the University of Oklahoma in the late 1960s. Marriott was named a distinguished alumna from Oklahoma City University and the University of Oklahoma and was posthumously inducted into the Oklahoma Historians Hall of Fame in 2004. She died in Oklahoma City on March 18, 1992.

Susan Labry Meyn, More Than Curiosities: A Grassroots History of the Indian Arts and Crafts Board and Its Precursors, 1920 to 1942 (Lanham, Md.: Lexington Books, 2001).

The following (as per The Chicago Manual of Style, 17th edition) is the preferred citation for articles:
Patricia Loughlin, “Marriott, Alice Lee,” The Encyclopedia of Oklahoma History and Culture, https://www.okhistory.org/publications/enc/entry.php?entry=MA049.