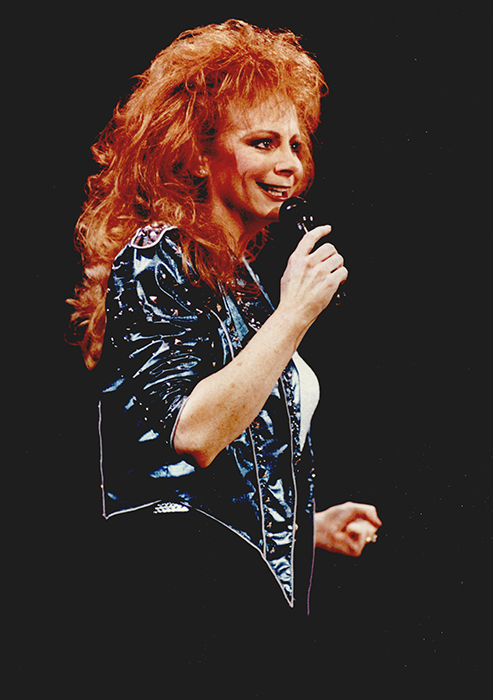 Country singer and actor Reba McEntire was born in McAlester, Oklahoma, on March 28, 1955, and grew up on the family ranch in tiny Chockie in Atoka County. Daughter of champion steer roper Clark Vincent McEntire and Jacqueline Smith McEntire, the rodeo barrel racer and future superstar graduated from Kiowa High School in 1973. Early performances came with the Kiowa High School Cowboy Band and family trio, the Singing McEntires. Reba McEntire earned a bachelor's degree in elementary education (with a minor in music) from Southeastern Oklahoma State University in 1976 while working family land at nearby Caddo. On June 21, 1976, she married champion steer wrestler Charlie Battles in Stringtown; they divorced in 1987. On June 3, 1989, she married musician Narvel Blackstock in Lake Tahoe, Nevada; their one child, Shelby Steven McEntire Blackstock, was born in 1990 in Nashville, Tennessee.

McEntire made her first recording, "The Ballad of John McEntire," about her grandfather, in 1971 in Oklahoma City. Cowboy poet-singer Red Steagall "discovered" her singing the national anthem at the National Finals Rodeo in Oklahoma City in 1974. Her first major-label recording, "I Don't Want to Be a One-Night Stand," came in 1976. Her first Number One song, "Can't Even Get the Blues," appeared in 1983. She lost her manager and seven band members in a 1991 plane crash. McEntire has received numerous music awards for multiple albums since 1978. Other accomplishments include several film roles since 1989, a Broadway portrayal of Annie Oakley and Reba, a television comedy, both in 2001, and an autobiography published in 1994.

The following (as per The Chicago Manual of Style, 17th edition) is the preferred citation for articles:
Richard Mize, “McEntire, Reba Nell,” The Encyclopedia of Oklahoma History and Culture, https://www.okhistory.org/publications/enc/entry.php?entry=MC021.