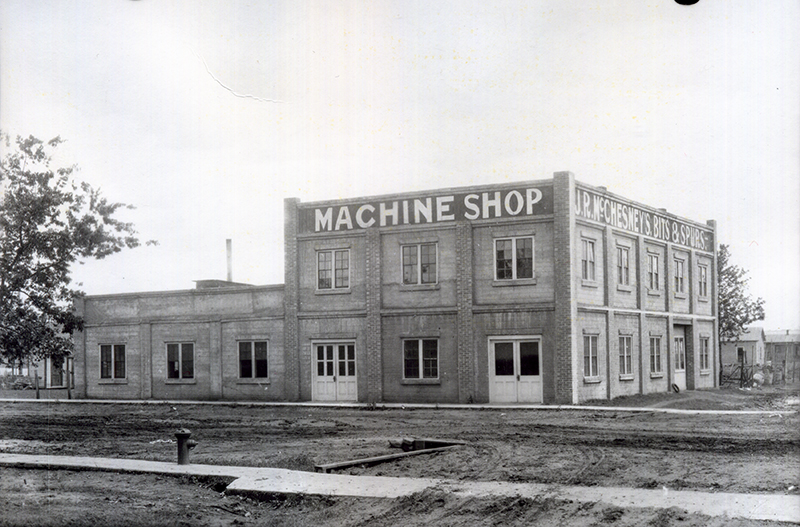 Producer of handmade spurs and bits of one piece, John Robert McChesney was the first spur maker to widely market those Texas-style Western-gear items. He was born to Thomas Carvin and Rosetta Mattison McChesney on September 26, 1866, in South Bend, Indiana. In 1884 the family moved to Rogers, Arkansas, where John McChesney met and married Tabitha Thomas. In 1887 the young couple relocated to Broken Arrow, Indian Territory, and he opened a blacksmith shop. McChesney had a natural metal working ability and an innovative mind. He discovered that making decorative spurs and bits, forged in one piece from locally acquired harrow teeth, for local cowboys, was much more lucrative than doing traditional blacksmith work. While at Broken Arrow, he developed the "goose neck" decorative style that soon developed into the "gal leg" style, which many also attribute to J. R. McChesney, as his work was known. Within a few years he was doing a considerable business.

In 1890 McChesney moved his operation to Gainesville, Texas, to take advantage of the region's booming prosperity. By 1906, when he issued his first bit and spur catalog, he was working exclusively with those products and marketing them through local merchants as well as with the Justin Boot Company. In 1910 McChesney's company moved to Pauls Valley, Oklahoma, and he bought a city block of property and opened a substantial manufacturing facility that employed fifty workers at its peak.

After moving to Oklahoma, the company remained a major producer of high-quality, handcrafted bits and spurs. Its catalogs contained 120 spur patterns and 64 bridle patterns, featuring hand engraving along with copper and silver inlay. However, over time other firms with high-speed machinery began producing a cheaper product that gradually eroded McChesney's sales. He continued the operation with a smaller work force but kept the same high standards for his products until his death at Pauls Valley on January 8, 1928. Ironically, the master spur maker had also been an active participant in the Garvin County Good Roads Association, which promoted the use of the automobile over the horse. The year following his death the Nocona Boot Company of Nocona, Texas, bought the company and produced the bits and spurs until 1933. J. R. McChesney bits and spurs are now considered one of the finest products of their type and are eagerly sought by western memorabilia collectors.

The following (as per The Chicago Manual of Style, 17th edition) is the preferred citation for articles:
Bobby D. Weaver, “McChesney, John Robert,” The Encyclopedia of Oklahoma History and Culture, https://www.okhistory.org/publications/enc/entry?entry=MC042.