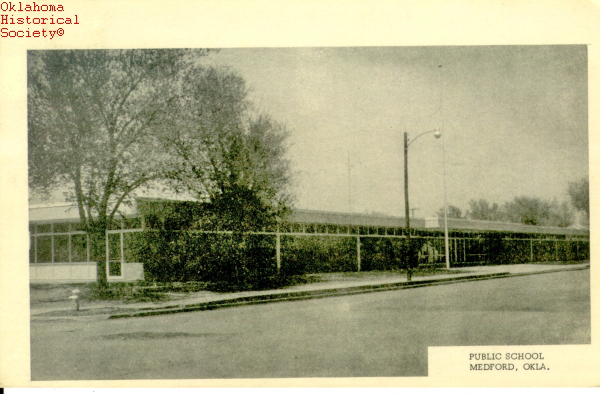 Medford, the county seat of Grant County, is situated at the junction of U.S. Highway 81 (Chisholm Trail Highway) and State Highway 11. It is generally believed that Medford was named for Medford, Massachusetts, the hometown of a railroad official. In 1889–90 the Chicago, Kansas and Nebraska Railway (later the Chicago, Rock Island and Pacific Railway) constructed a line from southern Kansas that passed through the future townsite in a north-south direction. The area was opened to non-Indian settlers during the Cherokee Outlet land opening on September 16, 1893. Subsequently, a post office was established on October 31, 1893. On March 10, 1894, the townspeople voted to incorporate by a vote of 52 to 2. In 1897 the Gulf Railroad (later the Atchison, Topeka and Santa Fe Railway) built a line from southern Kansas that passed through Medford from the northwest to the southeast. Centrally located within the county, it became the county seat through an election held on May 27, 1908. Medford received 2,010 votes, compared to 1,056 for Pond Creek (the former county seat) and 676 votes for Jefferson. Architect Albert A. Traver of Enid drew the plans for the courthouse, and Rowles and Bailey, contractors and builders in Oklahoma City, won the bid for the construction. The Grant County Courthouse (NR 84003027) was dedicated on July 4, 1910, and listed in the National Register of Historic Places in 1984.

Like other frontier communities, settlers soon established a school and numerous churches. The Medford school district, apparently the first in Grant County, was organized on February 23, 1894. Early churches included the First Christian Church (1893), St. Mary's Catholic church (1895), the General Conference Mennonite church (1897), and the Mennonite Brethren church (1899). By October 1900 Johann F. Harms published the Zions-Bote, a German-language newspaper that served the Mennonites. By 1909 the Methodist and the Congregational churches had been organized.

Located in a wheat-growing region, Medford served as an agricultural trade center with a flour mill and several grain elevators. The local economy supported three banks and three weekly newspapers in 1909. On June 25, 1911, a fire destroyed five blocks of businesses and residences. Many of the affected entrepreneurs found temporary quarters in which to make their livelihood. By 1919 the town boasted an opera house and a movie theater and was served by the Medford Water, Light and Power Plant and several telephone companies. The principal exports included grain, cotton, flour, produce, and livestock. In the 1930s industries included an ice factory, a creamery, and a machine shop. By the mid-1940s Medford had two banks and two weekly newspapers. Town amenities included a public library, a swimming pool, an athletic field, and a 3.5-acre park. In the 1950s the community also boasted a T.G.&Y. Store.

At the turn of the twenty-first century Medford had a council-manager form of government. The school district, with an enrollment of 334, offered grades prekindergarten through twelve. Of those employed, 91.8 percent commuted to work in Medford, Enid, and Blackwell. Three weekly newspapers, the Pond Creek Herald, the Medford Patriot-Star, and the Grant County Journal, served the community. Amenities included the Medford Municipal Airport. The Grant County Museum and the Medford Centennial Building offered exhibits reflecting local history. The Medford Bathhouse and Swimming Pool (NR 88001368) were listed in the National Register of Historic Places. Prominent residents have included U.S. Navy aviators Apollo and Zeus Soucek.

The following (as per The Chicago Manual of Style, 17th edition) is the preferred citation for articles:
Linda D. Wilson, “Medford,” The Encyclopedia of Oklahoma History and Culture, https://www.okhistory.org/publications/enc/entry.php?entry=ME003.