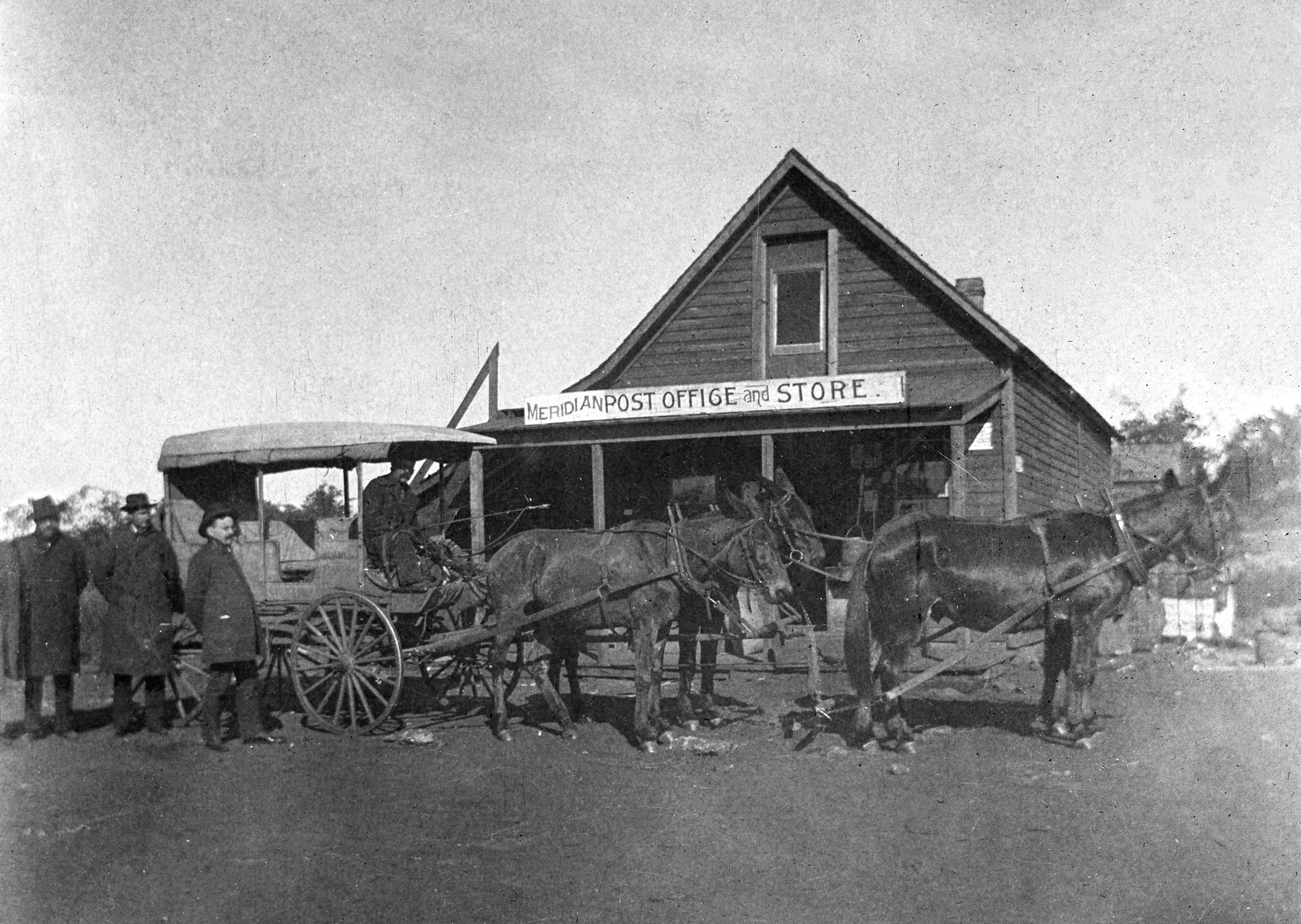 The agricultural community of Meridian lies in eastern Logan County, twelve and one-half miles southeast of the county seat of Guthrie and one mile north of Bear Creek's intersection with the Indian Meridian. The town is situated at the junction of county roads N3230/E0810.The west side of Meridian was originally settled by non-Indians during the Land Run of 1889, and the east side was occupied in 1891 when the Iowa, Sac and Fox, Kickapoo, Absentee Shawnee, and Citizen Band Potawatomi lands were opened. Consequently, one half of the sixty-acre town lies in Bear Creek Township and the other in South Cimarron Township. In 1893 Sarah E. Harbor opened a store on the Indian Meridian. The store also served as a post office when it was established on March 10, 1894. In 1895 she sold the store to Miles William Allen, one of the 1889 successful land claimants, and his wife Lucy became the postmistress. Because the town is not accessible by a highway, the existence of the Meridian community has depended on this symbiotic store/post office continuing in operation through the twenty-first century.

In 1903 the Missouri, Kansas and Oklahoma Railroad (later the Missouri, Kansas and Texas Railway, Katy) was constructing a branch line to Guthrie. Prior to the actual building of the railroad the Meridian Right-of-way and Townsite Company platted a town, which was incorporated in 1902. They initially suggested the name of Allen after the store/post office proprietor, but he declined the honor, saying that the village should be called Meridian because it was on the Indian Meridian. In 1903 the Fort Smith and Western Railroad also laid track through the town. In the early 1900s the short-lived Meridian Eagle and Meridian Sun newspapers served the citizens.

Meridian citizens were successful in having some political influence in Oklahoma's territorial government. James Ira McDaniel, a Meridian-area farmer, was elected to the Second Oklahoma Territorial Legislature in 1892, and Miles Allen was elected to the Sixth Oklahoma Territorial Legislature in 1900. In March 1907 the Anti-Jim Crow Convention met in Meridian, and delegates were instructed on how to organize opposition to the proposed constitution for the State of Oklahoma. Two persons of note accompanied their parents into the Meridian area. Martin Edwin Trapp, Oklahoma's sixth governor, was twelve years old when his parents staked a land claim near the future town. The second was Jennie Harris Oliver, who attended and later taught school in Meridian before earning acclaim as a poet, an author, and Oklahoma's third poet laureate.

In 1938 Meridian acquired rural electricity. The largest flood ever to inundate the town came on May 19, 1949, prompting area residents to join a flood control committee. Its plan for southeastern Logan and northeastern Oklahoma counties was implemented and was completed in 1963. Meridian's population stood at 199 in 1910. Numbers dropped to 165 in 1930 and then grew to 210 in 1940, the historic high. From the 187 residents recorded in 1950 the population steadily declined to 78 in 1980 and 54 in 2000, nine more than the 45 recorded in 1990, the historic low. After World War II there was no train service at Meridian, the cotton gins closed, and agriculture ceased as an economic activity to support the town. At the turn of the twenty-first century all those employed commuted to work in Stillwater, Guthrie, and Oklahoma City. The 2010 census found 38 residents.

Isabell C. Anderson, "History of Meridian, Oklahoma," in Who's Who in Logan County: The People and Enterprises Who Have Made Logan County (Guthrie, Okla.: Cooperative Publishing Co., 1927).

The following (as per The Chicago Manual of Style, 17th edition) is the preferred citation for articles:
Thomas L. Hedglen, “Meridian,” The Encyclopedia of Oklahoma History and Culture, https://www.okhistory.org/publications/enc/entry.php?entry=ME015.