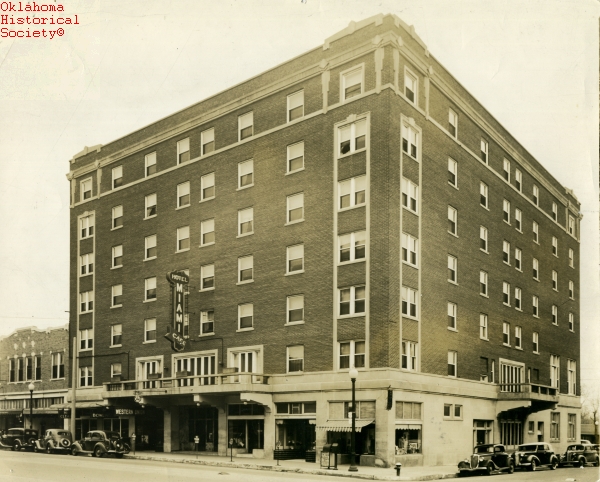 Located in Oklahoma's northeastern corner on U.S. Highway 69 (formerly U.S. Highway 66, Route 66), Miami is the county seat of Ottawa County. By 1907 statehood the town was already almost two decades old. With Kansas less than an hour away by horseback and Missouri not much farther, Miami held a desirable position. Velma Nieberding, whose History of Ottawa County was a 1982 Oklahoma Diamond Jubilee project, wrote that the settlement of Miami was not like pioneering elsewhere in Indian and Oklahoma territories. She noted that "it was settled in a businesslike way by men of vision who looked into the future and saw possibilities. It didn't just grow. It was carefully planned."

W. C. Lykins, president of a fledgling town company, was the driving force in the community's creation. He traveled to Washington, D.C., and successfully petitioned Congress to pass legislation on March 3, 1891, to establish the town. Coincidentally, also there on business was an acquaintance, Thomas F. Richardville, chief of the Miami tribe. He met with Lykins and agreed to confer with the U.S. Indian Commission and the Ottawa tribe, talks that led Congress to authorize the secretary of the interior to approve the townsite purchase from the Ottawa. For his support, Lykins, a member by adoption of the Peoria tribe, agreed to let the town be named after Richardville's Miami tribe. They and Manford Pooler, chief of the Ottawa, are generally identified in historical accounts as "fathers of Miami."

The Ottawa sold 588 acres of little-used land to the Miami Town Company for ten dollars an acre. The company then conducted a "grand auction sale" of lots on June 25 and 26, 1891. "This is the chance of your life to secure a home in Indian Territory and a fee simple title," declared an auction handbill extolling the region's economic potential, largely agricultural. Miami became the Indian Territory's first town in which land buyers could procure a deed to their property.

Miami prospered from the start. At 1895 incorporation, it boasted eight hundred citizens. H. H. Butler was elected its first mayor. It took another Indian tribe to elevate Miami from town to city. Awaiting discovery beneath Quapaw holdings to the north were vast mineral riches. As Nieberding wrote, "It would be only a few years until a group of newcomers . . . would begin development of the richest lead and zinc field in the world and put Miami on the map as a first-class city." Those newcomers were Charles M. Harvey, James F. Robinson, and brothers George and Alfred Coleman. Development of the Picher Mining Field enriched them and many Quapaw landowners. At 1907 statehood the population stood at 1,893 and rose to 6,802 by 1920. In the early twentieth century a number of newspapers served the citizens, including the Miami Republican, Daily Record, Ottawa County Beacon, Weekly Herald, Miami Enterprise, the Miami Record-Herald, and the Miami News-Record.

Miami would boom along with the mining industry for three decades before a dying lead and zinc market resulted in the mines' closing, most of them forever. The 1940 census listed 8,345 residents. Economic despair was short lived, however. In December 1943 the B. F. Goodrich Company announced plans for a six-million-dollar tire plant with a projected twenty-one hundred workers and an annual payroll of $2.5 million. The news triggered a housing boom, and Goodrich provided the backbone of the area's economy for more than forty years. The 1950 population increased to 11,801 and steadily climbed to 13,880 in 1970.

In 1985 another announcement sent a chill across the region. On August 23, known locally as "Black Friday," Goodrich decided to close the Miami plant. The official shutdown occurred six months later. The distress of losing the company slowly subsided with the emergence of new business and industry along with expansion of existing firms and retailers. At the end of the twentieth century the Burlington Northern Santa Fe Railway still served the city.

The population, which peaked at 14,237 in 1980, slumped to 13,142 in 1990, and then rebounded to 13,704 in 2000 It dropped slightly to 13,570 in 2010. The large Northeast Area Vo-Tech Center and Northeastern Oklahoma Agricultural and Mechanical College (formerly the Miami School of Mines and Northeastern Oklahoma Junior College) exist as two campuses, providing area jobs and education. The town is home to a large Integris medical complex and the Coleman, a city-owned theater, which is listed in the National Register of Historic Places (NR 83002114). Other area properties in the register include the George L. Coleman, Sr., House (NR 83002113), Commerce Building–Hancock Building (NR 83002115), Miami Marathon Oil Company Service Station (NR 95000041), Modoc Mission Church and Cemetery (NR 80003293), Narcissa D-X Gas Station (NR 03001240), and Peoria Indian School (NR 83002116). Heisman Trophy winner Steve Owens and Rhodes Scholar Darrel Ray Turner hail from Miami. The area is home to eight Indian tribes.

The following (as per The Chicago Manual of Style, 17th edition) is the preferred citation for articles:
Jess Heck, “Miami (town),” The Encyclopedia of Oklahoma History and Culture, https://www.okhistory.org/publications/enc/entry.php?entry=MI002.