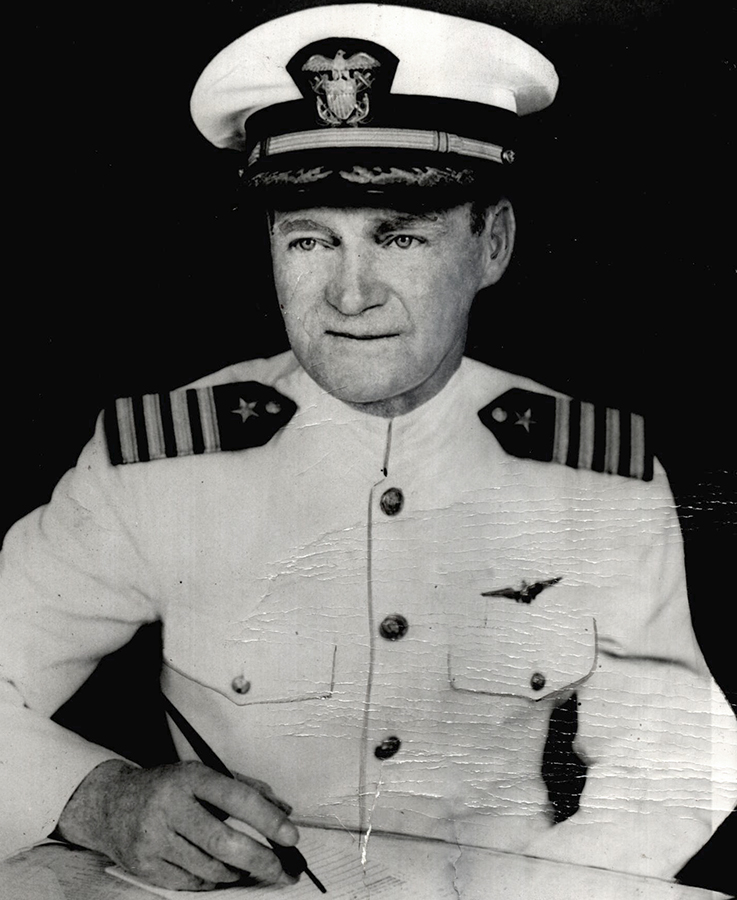 During World War II Marc Andrew Mitscher served as vice-admiral of the United States Navy and commander of the famed Task Force Fifty-Eight. Born in Hillsboro, Wisconsin, on January 26, 1887, Marc A. "Pete" Mitscher grew up an Oklahoman. After Oklahoma Territory opened for settlement, Mitscher's father, O. A. Mitscher, moved the family to Oklahoma City, and he was elected mayor in 1891. In 1900 Pres. William McKinley appointed the elder Mitscher as Osage Indian agent at Pawhuska. Unimpressed with the local schools, his father sent young Mitscher to Washington, D.C., for his education. In 1904 U.S. Rep. Bird S. McGuire appointed him to the United States Naval Academy at Annapolis, Maryland.

An indifferent student, Mitscher seemed to be in continuous trouble, earning 159 demerits in one class year. In 1906 he resigned, but his father immediately coaxed McGuire to reappoint him. After six years, in 1910 he graduated 113th out of 131 classmates. At Annapolis he developed a passion for aviation. He served in the fleet until 1915 when he found an opportunity for aviation training aboard the USS North Carolina. In 1919 he received his first Navy Cross for his participation in the first trans-Atlantic flight by Navy Curtiss seaplanes. Three of the Curtisses made the attempt, and only one landed safely; unfortunately, Mitscher had to be rescued from the sea.

Mitscher's investment in aeronautics and the navy carried him through various assignments, including teaching flyers in San Diego, duties with the Bureau of Aeronautics, and stints on early aircraft carriers. In 1938 the navy promoted him to captain, and three years later he assumed command of the carrier USS Hornet. After Japan attacked Pearl Harbor, his carrier hosted Col. Jimmy Doolittle's sixteen B-25 bombers that raided Tokyo and other Japanese cities. On May 30, 1942, Mitscher achieved rear admiral status and by June was battle tested at Midway. After active campaigning in the Pacific theater of operations, he took command of Task Force Fifty, renamed Task Force Fifty-Eight in January 1944. He was involved in most major battles in the Pacific, including the Philippine Sea, Leyte Gulf, the Marianas Islands "Turkey Shoot," and the assaults on Iwo Jima, Okinawa (where his forces were in action for a remarkable ninety-two straight days), and the Japanese home islands.

In 1945 Mitscher took the office of deputy chief of naval operations for air and in 1946 became commander of the Eighth Fleet. The navy then assigned Admiral Mitscher to be commander-in-chief of the U.S. Atlantic Fleet. The navy had awarded Marc A. Mitscher three Navy Crosses by the time he died of a heart attack on February 3, 1947. His wife, Frances, survived him.

The following (as per The Chicago Manual of Style, 17th edition) is the preferred citation for articles:
Larry O'Dell, “Mitscher, Marc Andrew,” The Encyclopedia of Oklahoma History and Culture, https://www.okhistory.org/publications/enc/entry.php?entry=MI050.