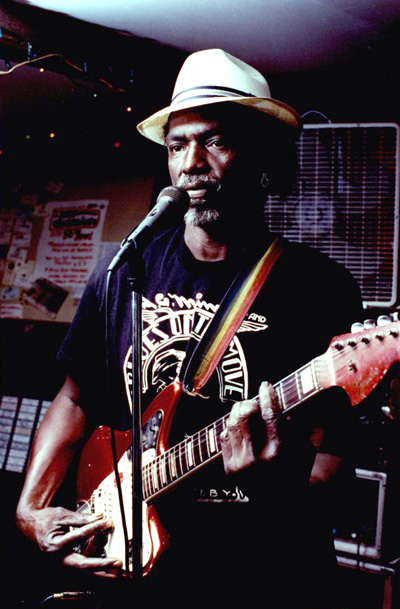 At the turn of the twenty-first century, no one did more in Oklahoma to keep the blues alive among young people and adult blues fans in the state than D. C. Minner and his bassist and wife, Selby, known collectively as Blues on the Move. A smooth vocalist and fluid blues guitarist, Minner wrote, recorded, and released his own "down home blues" after playing through thirty years as a touring blues artist. Born on January 28, 1935, in Rentiesville, Oklahoma, D. C. Minner was the only child of Clarence and Helen Pearson Minner but was raised by his grandmother Lura Drennan on family land where she operated a juke joint, speak-easy, grocery, and after-hours blues club beginning in the early twentieth century. As a youngster, Minner spent hours listening to the acoustic blues played by various traveling musicians in the club. His grandmother, Lura, promoted large gospel sings in Muskogee.

Minner's first instrument was an old front-porch piano, and he sang in gospel quartets when he was fourteen. He left Rentiesville in 1953 for service in the U.S. Army where he learned to play flamenco guitar from two army buddies. In 1961 Minner was in Oklahoma City playing bass for Little Eddy Taylor. Soon thereafter he played bass with Larry Johnson and the New Breed, a group that played independently through early 1967, but he also made a living out of backing up blues stars Lowell Fulson, Chuck Berry, Bo Diddley, Jimmy Reed, and Eddie Floyd. Minner also played and led the band for two years with Freddy King, his biggest influence on guitar.

About 1965 Minner headed for California. He played in a group with Tony Matthews, long-time guitarist for Ray Charles. After moving to San Francisco in 1969 Minner met Selby, his future bass player, wife, and business partner. She had worked her way to the West Coast from Providence, Rhode Island, where she had been an art student and aspiring singer. While working the coffeehouses and clubs as an acoustic blues and folk singer over the next few years, she eventually met Minner. The two started performing together in 1976, marrying in 1979. With D. C. on guitar and vocals, Selby on bass and vocals, and a series of pick up drummers, they traveled the nation until tiring of the road life and urban hassles. Returning to Rentiesville in 1988, they opened the Down Home Blues Club. In 1991 the duo started the Dusk 'til Dawn Blues Festival, featuring a wide roster of local, regional, national, and international blues artists.

The Minners released a series of independent recordings in the 1990s on their Texas Road Recording label. They were also extremely active with the Blues in the Schools (BITS) program, taking on residencies to give band programs and teach students how to play blues, R & B, and rock. In March 1998 they appeared on The Oprah Winfrey Show. In 1999, the International Blues Foundation honored them with a Keeping the Blues Alive Award and featured them in a nationally distributed video about Blues in the Schools. In 1999 D. C. Minner was inducted into the Oklahoma Jazz Hall of Fame and in 2003 into the Oklahoma Music Hall of Fame.

D. C. Minner died on May 6, 2008, in Rentiesville. Selby Minner subsequently continued performing, recording, and teaching the blues in Oklahoma and around the nation. She also maintained the Down Home Blues Club's as both a historic and active musical venue, organized the annual Dusk 'til Dawn Blues Festival through 2017, and continued coordinating inductions and celebrations for Oklahoma Blues Hall of Fame.

The following (as per The Chicago Manual of Style, 17th edition) is the preferred citation for articles:
Hugh W. Foley, Jr., “Minner, D. C.,” The Encyclopedia of Oklahoma History and Culture, https://www.okhistory.org/publications/enc/entry.php?entry=MI053.