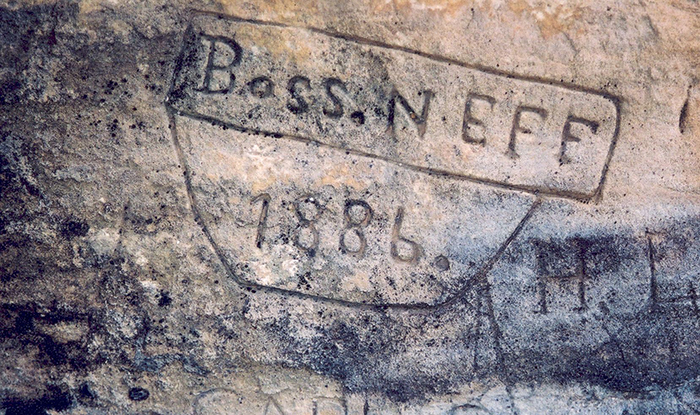 Pioneer rancher of Texas County, Oklahoma, Boss Sebastian Neff was born on March 5, 1866, near Lewisburg in Preble County, Ohio. A son of Jacob and Margaret Wampler Neff, Boss attended school until the age of fourteen. Soon thereafter he read a book about Indian Territory and Texas cattle ranching. The writing inspired him to venture westward, and he became a stockman in 1883.

Neff traveled to Dodge City, Kansas, but he failed to find employment. For the next several years he roamed from the Texas Panhandle to Montana, working as a hunter, teamster, and cowboy. His labors occasionally took him onto the free grass of the Oklahoma Panhandle, then known as No Man's Land. In 1886 Neff engraved his name on Autograph Rock on the historic Santa Fe Trail in present Cimarron County, Oklahoma. He also visited Black Mesa and the ruins of Camp Nichols.

In 1887 Ira Neff, Boss's brother, settled south of the Oklahoma Panhandle in Hansford County, Texas, and together they fenced two sections of land adjoining Palo Duro Creek. Boss Neff purchased his first cattle in 1888 and grazed them near a dugout he had acquired on Hackberry Creek in present Texas County, Oklahoma. He branded his herd with the NF mark that he used until 1923. He moved to a sod house along the Beaver River north of present Hardesty in the year 1889.

The Oklahoma Organic Act of 1890 made No Man's Land a part of Oklahoma Territory. Neff filed a homestead claim and helped organize Beaver County. He remodeled his soddy and then married Ida Eubank in 1893. The house served as their residence for five years and was the birthplace of three of their eight children.

Neff built a large home in 1898. He then had some fifteen hundred cattle and forty-five sections of pasture. Life in the region was harsh. A tornado destroyed the Neff home in June 1900, and wolves, loco weed, and prairie fires threatened his cattle. Neff rebuilt as settlers occupied the Oklahoma Panhandle. By 1907 much of his formerly open-range acreage was legally owned by farmers.

Neff moved his family to Hooker, Oklahoma, in 1909 and purchased a feed store. He sold a portion of his Texas County ranch land in 1916 and later divided the remainder among his children. In 1918 he became president of a Texhoma, Oklahoma, bank. A member of various fraternal organizations and historical societies, Boss Neff was inducted into the Oklahoma Hall of Fame in 1937. He died at Liberal, Kansas, on March 15, 1947, and was buried at Hooker.

The following (as per The Chicago Manual of Style, 17th edition) is the preferred citation for articles:
Jon D. May, “Neff, Boss Sebastian,” The Encyclopedia of Oklahoma History and Culture, https://www.okhistory.org/publications/enc/entry.php?entry=NE001.