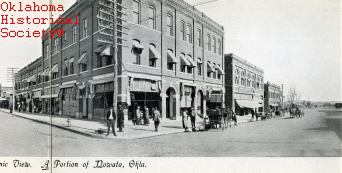 Located in south-central Nowata County, fifty-one miles north of Tulsa and twenty-one miles south of the Kansas state line, the city of Nowata sits at the junction of U.S. Highways 60 and 169. It serves as the county seat. The 3.101 square miles covered by the town was originally a small section of an area purchased by Chief Charles Journeycake's Registered Delaware in 1868 from the Cherokee Nation.

Nowata evolved from a small trading post into a town. A post office was established there on November 8, 1889. That same year the Kansas and Arkansas Valley Railway (later the Missouri Pacific Railway) was extended northward from Wagoner to the Indian Territory-Kansas state line by way of Nowata. The name Nowata is believed to have been derived from the Delaware word no-we-ata, meaning "welcome." However, another version tells the story of how a traveler, upon finding a dried-up spring, posted a sign "No Wata" as a warning for others. Nowata was incorporated on April 17, 1899.

A timely benefit in the growth of Nowata came just prior to 1904 when Congress announced it would establish courts in several Indian Territory towns. An influential resident was dispatched to Washington, D.C., where he won a court for Nowata. During this time the First National Bank of Nowata proceeded with plans for a new building with a third story added to provide a facility for the federal court. In 1909 fire destroyed the bank building and most county records stored there. A small building on Davis Street was utilized as a courthouse until 1912 when the present courthouse was constructed. The Nowata County Courthouse (NR 84003375) is the only local property presently listed in the National Register of Historic Places.

The discovery of oil and gas in 1904 earned the region a reputation for being the world's largest shallow oil field with a number of those wells still producing today. Between 1914 and 1948 Nowata served as the southern terminus for the Union Electric Railway. In 1930 the Missouri Pacific Railway loaded 262 cars with local corn, hay, and livestock. At that time the town also had 850 telephones. Early newspapers included the Nowata Herald and the Nowata Advertiser.

Several hotels were built during Nowata's "boom" days during the early 1900s. One hotel in particular deserves mentioning. The Savoy, constructed in 1909 on the town square, was a three-story, brick building where oil leases were signed and formal balls were held. In later years the building also served as a county hospital. Almost ninety years after its completion, the Savoy was rehabilitated. At the turn of the twenty-first century it housed a variety of shops and service businesses.

Early-day history may be seen in the Nowata County Historical Museum in twenty-one rooms displaying historical themes that include American Indians and the oil boom. Another museum is housed in the Glass Mansion, a 1900s-era, four-story home with period furnishings.

The following (as per The Chicago Manual of Style, 17th edition) is the preferred citation for articles:
Maxine Bamburg, “Nowata,” The Encyclopedia of Oklahoma History and Culture, https://www.okhistory.org/publications/enc/entry.php?entry=NO017.