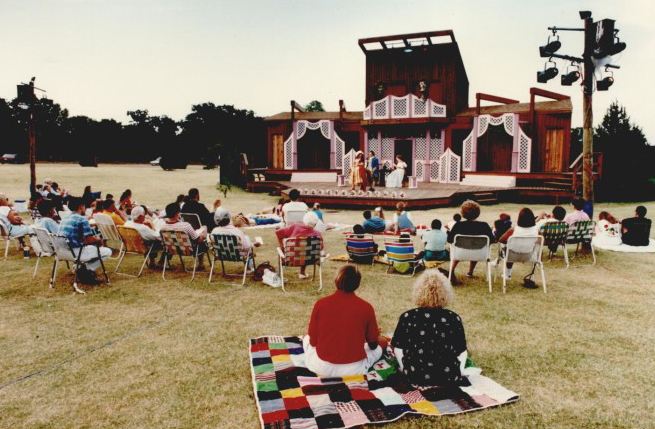 OKLAHOMA SHAKESPEARE IN THE PARK.

Outdoor performances and festivals featuring the plays of William Shakespeare first began in 1935 in Ashland, Oregon. This annual summer event remains the nation's longest running, but over the next forty years such outdoor dramas sprang up around the nation. In Oklahoma, Jack O'Meara (1948–89) saw that the state's many theater groups did not regularly perform Shakespeare's plays even though they are considered masterpieces of English literature. O'Meara believed that the people of Oklahoma City would welcome the opportunity to see quality presentations of these dramas. With his wife, Kathryn Huey O'Meara, in 1985 he formed Oklahoma Shakespeare in the Park, a professional theater company, to provide Oklahomans free access to lively, fun, and understandable stage productions of Shakespeare and other classical playwrights. In addition to professional actors, local amateurs also participate as cast and crew.

The first season, held outdoors in August 1985 in Edmond's Hafer Park, showed performances of Twelfth Night and A Midsummer Night's Dream to more than six thousand people. In addition to theatrical productions the troupe also held a series of classes for third through twelfth graders, teaching theater games, voice and movement, and dance. After the success of the summer season O'Meara added an indoor winter program. It regularly presented dramas by well-known classical playwrights such as Molière and adaptations of the works of other authors, such as Charles Dickens and Oliver Goldsmith. In summer 1988 organizers charged an admission fee for the first time, but that did not deter visitors. That year more than twelve thousand attended the summer performances. In 1999 the group premiered a new series, "Stage Center Presents," with King Lear. The series is produced at Oklahoma City's downtown Stage Center. In 2004 Oklahoma Shakespeare in the Park celebrated its twentieth season as a mainstay of the Edmond and Oklahoma City arts and tourism industries. The productions have introduced several thousand visitors to the two cities. In addition, the company's tours have shared the classics with other communities around Oklahoma. In 2006 Oklahoma Shakespeare in the Park moved its summer performances to the Myriad Gardens Water Park in downtown Oklahoma City.

By 1992 more than one hundred summer Shakespeare festivals and permanent theaters existed in the nation. Most took place outdoors in the summer months. They ranged from New York's Shakespeare Festival in Central Park to an annual Oklahoma Shakespearean Festival held since 1979 at Southeastern Oklahoma State University in Durant.

The following (as per The Chicago Manual of Style, 17th edition) is the preferred citation for articles:
Dana Jackson, “Oklahoma Shakespeare in the Park,” The Encyclopedia of Oklahoma History and Culture, https://www.okhistory.org/publications/enc/entry.php?entry=OK078.