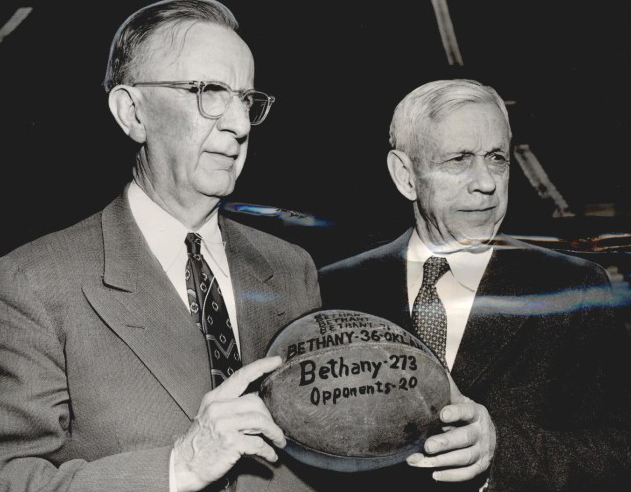 A legendary head football coach at the University of Oklahoma from 1905 to 1926, Benjamin "Bennie" Owen was born in Chicago on July 24, 1875. He moved with his family first to St. Louis and then to Arkansas City, Kansas. In 1897, intending to become a doctor, he entered the University of Kansas. There he discovered football and his talent for the game. Owen was the quarterback under the illustrious coach Fielding Yost. After coaching for a year at Washburn (1900) and assisting Yost at Michigan (1901), Owen became the head coach of the "Terrible Swedes" of Bethany College in Lindsborg, Kansas (1902–04). Owen came to the attention of officials at the University of Oklahoma (OU), not only for his splendid record (22–2) and for beating the Sooners twice, but also for the sportsmanship, the clean play, the gentlemanly behavior of his teams. His players were rarely penalized, they watched their language, and they completed their educations and earned their degrees.

Before Owen's arrival in the fall of 1905 at a salary of $900, football at the university had been a rag-tag, informal affair. The team had run through five coaches during its first decade (one of whom was the English professor Vernon L. Parrington). Before Owen, the coaches suited up and played, as did nonstudents from town. The facilities and equipment were makeshift, and the overall record (29–15) was unspectacular. Owen revolutionized and regularized the game and can be credited for starting the tradition of illustrious football at the University of Oklahoma. His teams were known for their speed, conditioning, and innovations (including Owen's revolutionary use of the forward pass).

By the time he ended his active coaching career in 1926, Owen's Oklahoma teams had compiled a record of 122–54–16, enjoyed four undefeated seasons, and won three conference championships. Astonishingly, Owen also coached both basketball (1908–21) and baseball (1906–22) at the university with impressive records in both of these sports. He was included in the very first group of those inducted into the College Football Hall of Fame in 1951. One unfortunate incident marked his career and set him further apart from other coaches: On the morning of October 16, 1907, Owen went hunting with a friend. While they were riding in his friend's open carriage, Owen's shotgun accidently discharged, wounding him badly in his right arm and necessitating its amputation.

Bennie Owen's last great football season was in 1920, when his team went undefeated to a conference championship. His only three losing seasons occurred near the end of his coaching career, 1922–24, and in 1926 he decided to give up coaching football, retaining his position as the university's athletic director until 1934. He also took on the directorship of intramural sports, devoting himself energetically to physical fitness and exercise among the university's nonathletes.

Owen was a tireless advocate for the construction and improvement of campus athletic facilities. He played a prominent, if not a principal role in the construction of the Memorial Stadium, the field house, the men's swimming pool, the baseball field, tennis courts, and a nine-hole golf course that he himself designed. It was understood from the very beginning that whatever name the stadium bore, the playing surface at its center would always be known as Owen Field.

Soon after his arrival in Norman, he married Nina Bessent, a university student. The couple had three daughters. In 1964 they moved to Houston, where one of their daughters lived, and Bennie Owen died there on February 26, 1970, at the age of ninety-four. He is buried at the Memorial Park Cemetery in Oklahoma City.

The following (as per The Chicago Manual of Style, 17th edition) is the preferred citation for articles:
David W. Levy, “Owen, Benjamin Gilbert,” The Encyclopedia of Oklahoma History and Culture, https://www.okhistory.org/publications/enc/entry.php?entry=OW007.