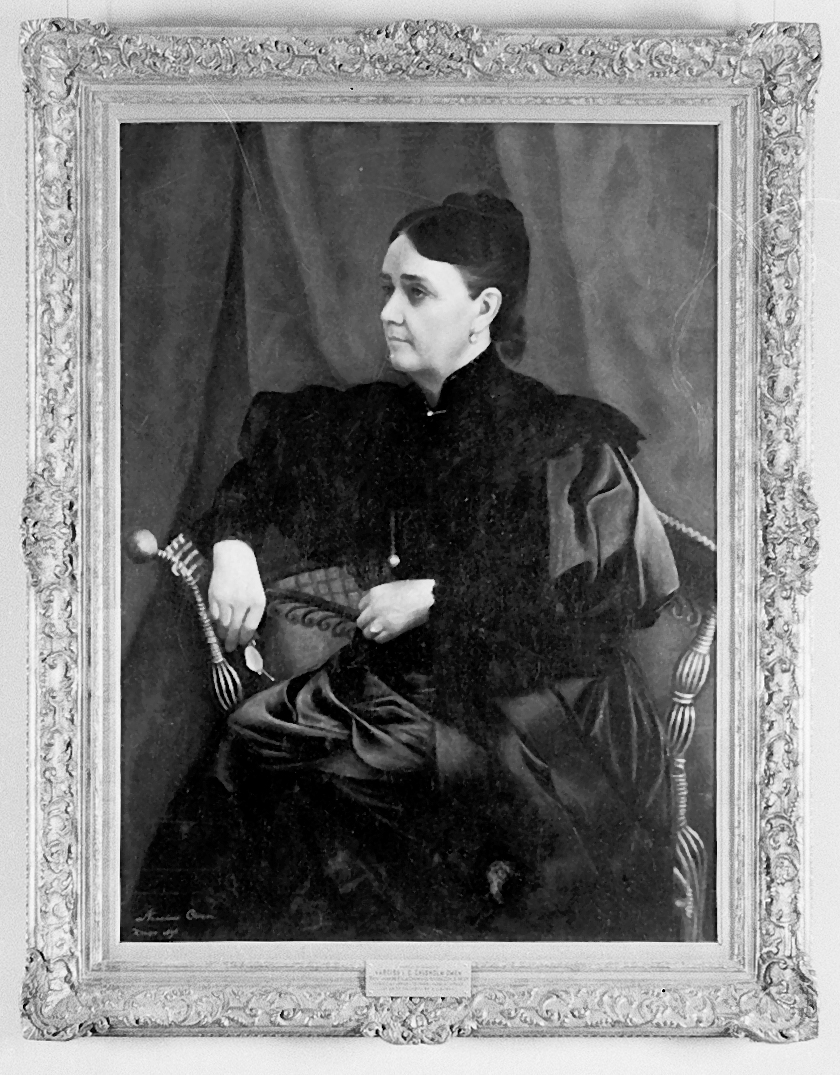 Narcissa Owen, mother of one of Oklahoma’s first two U.S. senators (Robert Latham Owen, Jr.), was a Cherokee music teacher and artist. She was born Narcissa Clark Chisholm on October 3, 1831, to Thomas H. and Malinda Wharton Chisholm near Webbers Falls, Indian Territory (I.T.). Thomas Chisholm, elected on July 16, 1834, as third chief of the Western or Old Settler Cherokees, died from typhoid fever in 1834.

Narcissa Chisholm’s education began at Dwight Mission and at Rev. Jesse Bushyhead’s Baptist mission school, both in the Cherokee Nation. In 1846 she lived with her older sister, Jane Elizabeth (Chisholm) Bruton, and continued her education at Fayetteville (Arkansas) Female Seminary, a school for full- and mixed-blood Cherokees as well as white students. It had been founded in 1839 by Sophia Sawyer, a missionary teacher to the Cherokee, and Sarah Ridge, widow of John Ridge. The curriculum included history, geography, sciences, religious instruction, and physical activity. Circa 1848 Chisholm furthered her art and music education at a higher education institution in Indiana. She then returned to the Fayetteville seminary, completing her course work in June 1850.

After graduating, Chisholm taught music at the Fayetteville seminary before accepting a music teaching job in eastern Tennessee circa 1852. There she met civil engineer Robert Latham Owen, a railroad surveyor. They married in in October 4, 1853. Their two sons, William Otway Owen and Robert Latham Owen, Jr., were born in 1854 and 1856, respectively. From the mid-1850s through the 1860s the family resided at Honor Point, a mansion in Lynchburg, Virginia. In 1870 the family moved to Norfolk, Virginia, where her husband died on June 2, 1873.

In 1879, Narcissa Owen returned to Indian Territory. She taught music at the Cherokee Female Seminary in the Cherokee Nation. While living in I. T., she participated in the annual Indian International Fair in Muskogee.

Retiring in 1896, Narcissa Owen devoted her time to painting landscape scenes and portraits. Known as “the Mother of Cherokee paintings,” she created portraits of former (deceased 1819) U.S. Pres. Thomas Jefferson and some of his descendants. These were displayed in the Indian Territory Building at the 1904 Louisiana Purchase Exposition (World’s Fair) held in St. Louis, Missouri. Her fondness for Jefferson stemmed from the president’s having given her father, Thomas Chisholm, a Jefferson peace medal. For her work shown at the fair she received an honorary diploma and a medal.

While her son Robert L. Owen served as U.S. senator, she lived in Washington, D.C., where she studied art at the Corcoran Gallery of Art and the Library of Congress. Her paintings have been exhibited at the University of Virginia Art Museum, the Oklahoma Historical Society, and the Gilcrease Museum. Owen was also known for her tapestries and finger weaving.

Narcissa Owen also advocated women’s suffrage and women’s education, especially relating to American Indian women. In 1910 she represented Oklahoma suffragists as a delegate to the forty-second National American Woman Suffrage Association convention held in Washington, D.C. She was an active member of women’s clubs, including the Fortnightly Club and the Tuesday Club of Bartlesville, I.T. She hosted meetings at her “ranch,” Monticello. Narcissa Owen published the Memoirs of Narcissa Owen, 1831–1907 in 1907. While visiting in Guthrie, Oklahoma, in May 1911, she fell, broke her hip, and died from complications on July 11. She was buried beside her husband in Spring Hill Cemetery at Lynchburg, Virginia.

The following (as per The Chicago Manual of Style, 17th edition) is the preferred citation for articles:
Linda D. Wilson, “Owen, Narcissa Clark Chisholm,” The Encyclopedia of Oklahoma History and Culture, https://www.okhistory.org/publications/enc/entry.php?entry=OW008.