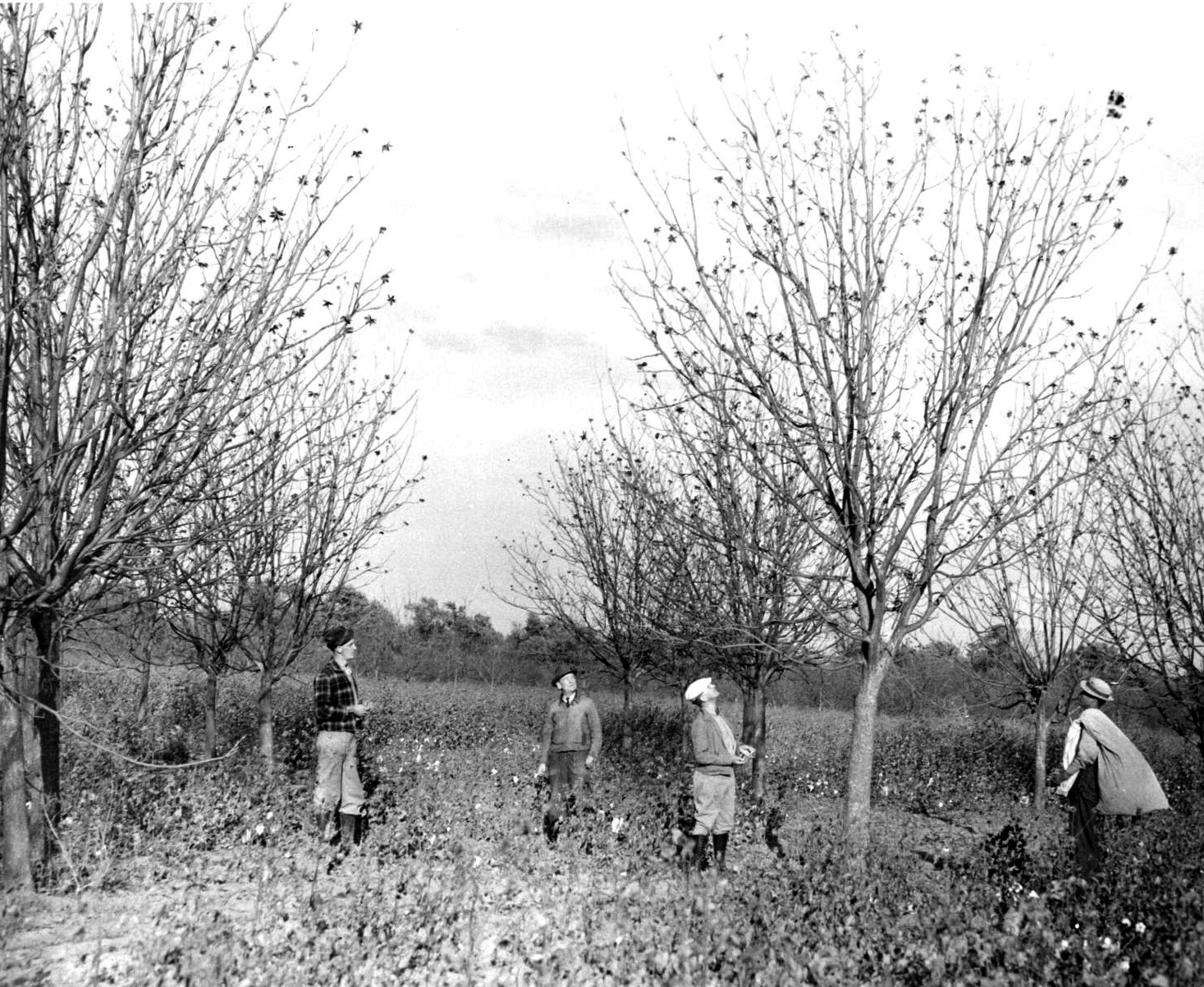 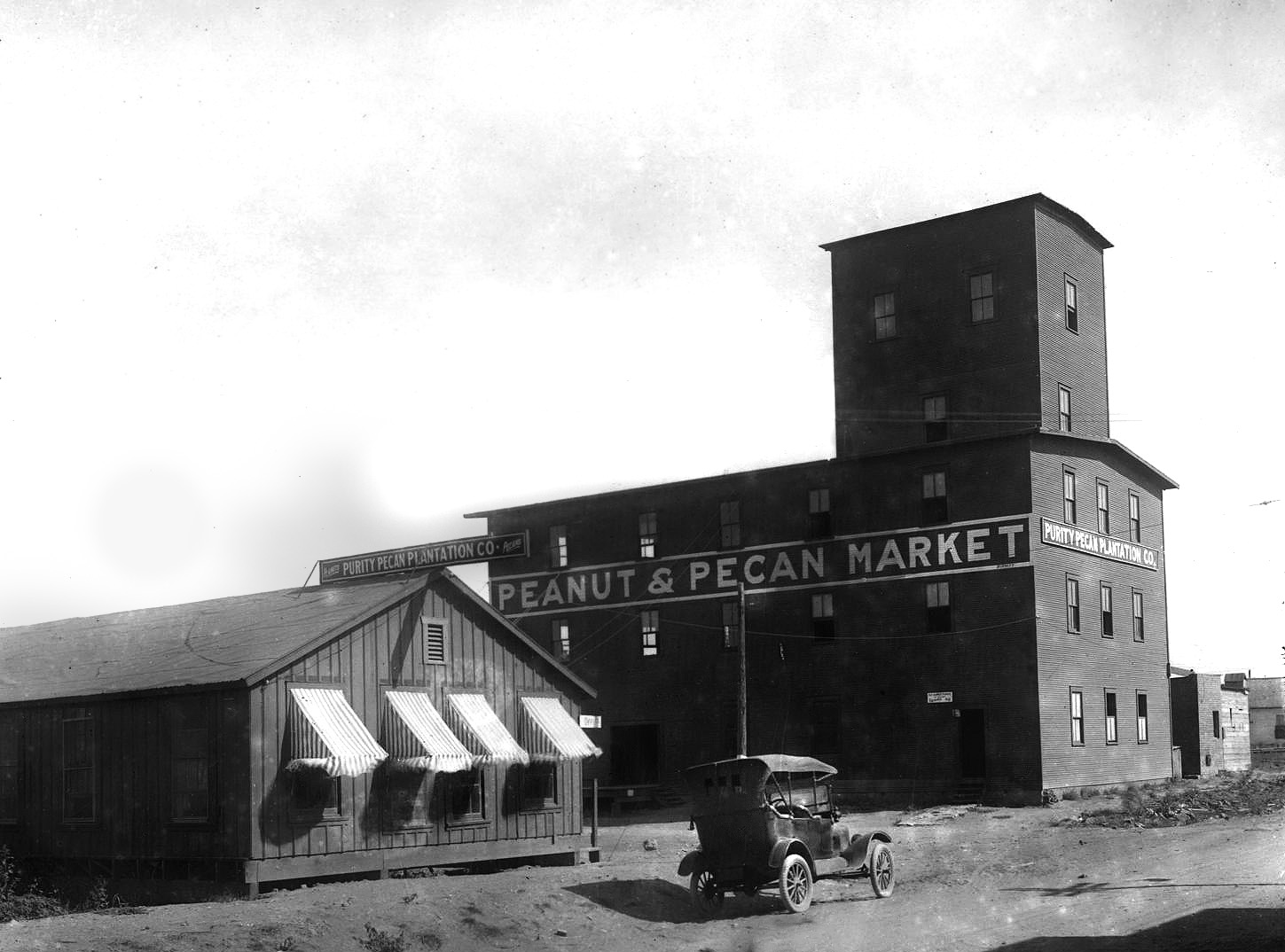 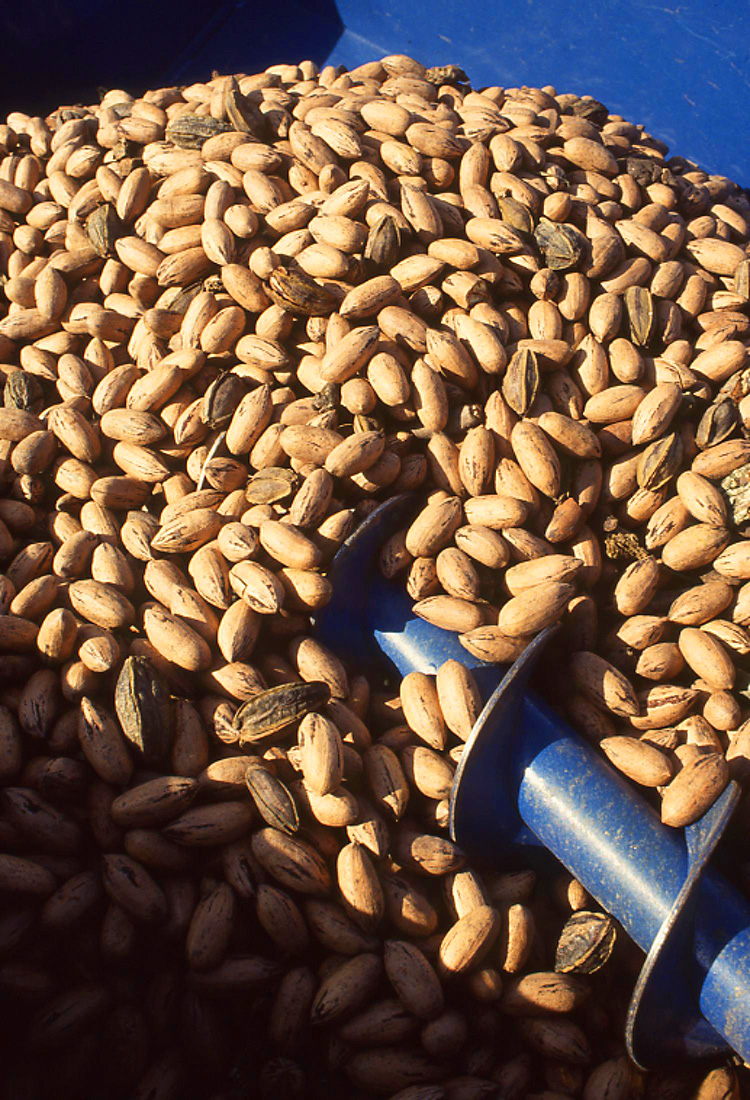 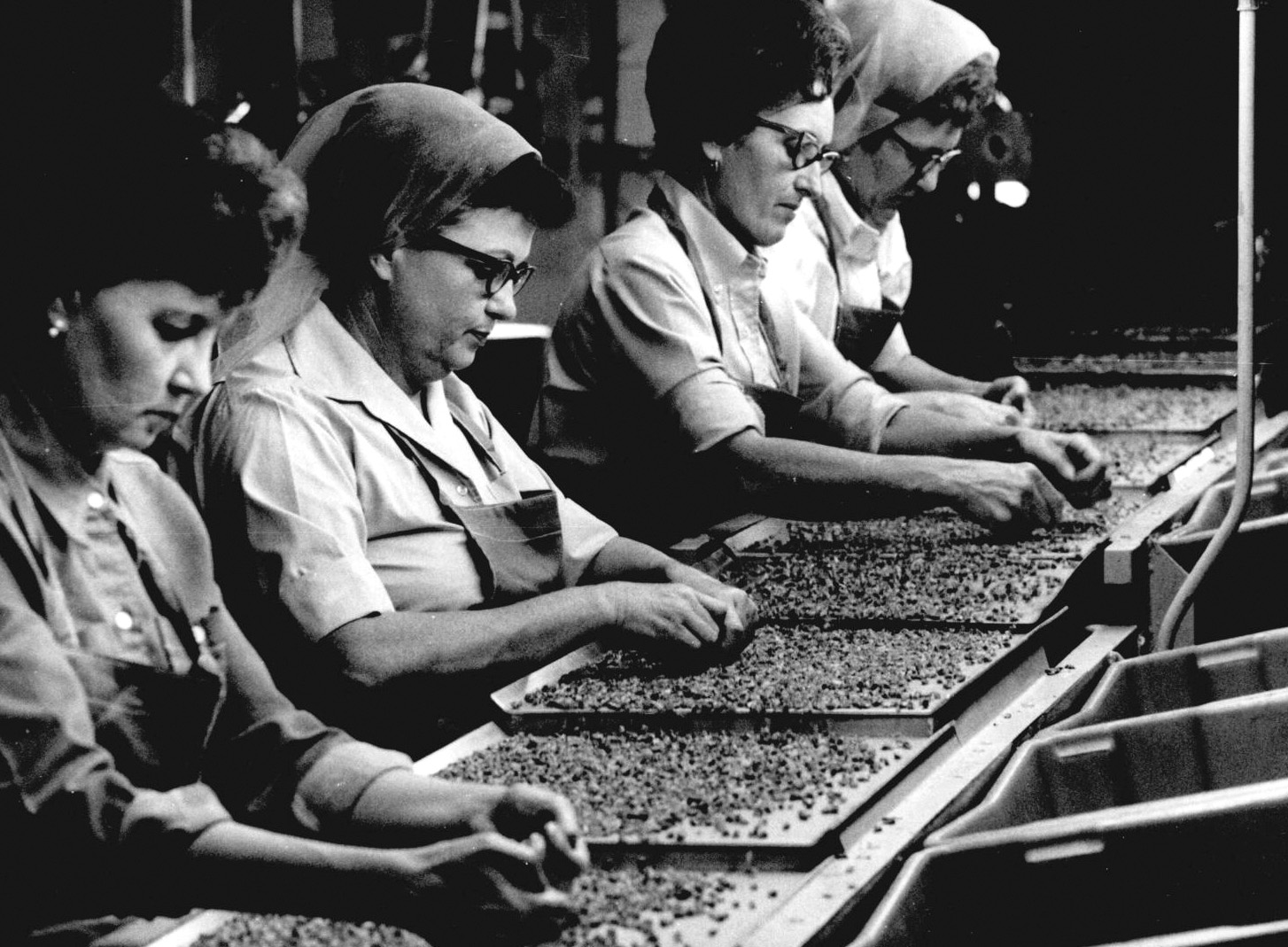 All across Oklahoma native pecan trees grow wild along the state’s numerous waterways where deep alluvial soils create prime conditions for native pecan trees. Rivers and streams have helped distribute seeds all along the banks of tributaries from the most northeastern region all the way to the Red River. Pecan country is bounded on the north by a line drawn from Miami southwest to Frederick and includes southern Oklahoma as far as Hugo.

American Indians were the first to recognize the many benefits of this indigenous resource. A good source of energy, pecans were important to sustaining the tribes during the fall and winter months. The word “pecan” was first used by an American Indian tribe to describe nuts requiring a stone to crack. In the 1500s Spanish explorers wrote about finding thin-shelled nuts during their trips through present Oklahoma.

About sixty of Oklahoma’s seventy-seven counties commonly report pecan production. Much of Oklahoma’s pecan acreage is routinely unreported because more than two-thirds of the crop is not harvested. In years with high prices and good crops many of the unmanaged groves are picked up for extra income. With new technology such as satellite imagery and computer programs, the total acreage in production will be easier to determine. In 2017, of the state’s sixty pecan-producing counties, the top five were Carter, Garvin, Ottawa, Bryan, and Love.

Many pecan groves are unmanaged and overgrown. Pecans are alternate bearing; they have a large crop one year and little to none the next year. This is especially common in native groves where inputs are reduced compared to planted and improved cultivar orchards. During a heavy production year many landowners hire others to harvest their crop. Cattle and native pecans are commonly cultivated together. Even with restrictions against grazing the forage underneath after applying insect- or disease-control chemicals, pecans and cattle fit together.

Education and research have always been important to growers. The Oklahoma Pecan Growers’ Association originated in 1926 and was incorporated in 1927. In 2020 this organization of growers and pecan stakeholders will host its ninetieth annual meeting, having missed only a few years during World War II. Held every June, the annual event includes pecan education sessions, a vendor fair, equipment demonstrations, and orchard tours. In 1934, the first year of records, there were thirty-four members. In 2019 the organization had 240 members.

In 1933 Oklahoma pecan growers began searching for superior native pecans. In 1939 Carl Hubbell, who was raised near Meeker, Oklahoma, and who was a pitcher for the New York Giants baseball team, was interested in pecan growing. He donated $150 to purchase a plaque recognizing the winner of the Oklahoma pecan show. The plaque would be displayed in the county extension office that served the location where the winning pecan had been grown. Many nuts that are chosen for propagation are named after the grower. Mount, Oakla, Patrick, Hayes, Cowley, Maramec, and Gormley were named selections from these shows. The Hubbell plaque and samples of the winning entries are displayed in the Herman Hinrichs Conference Center at the Cimarron Valley Research Station near Perkins. The state pecan show continues to display the best pecans grown in both improved cultivars and native categories.

Oklahoma State University (OSU) and the associated Agricultural Experiment Station system have led in pecan research. In 1946 the Oklahoma Pecan Field Station was established near Sparks in Lincoln County. F. B. Cross, OSU Horticulture Department head, and E. L. Whitehead, OSU extension horticulturist, worked to find native pecans best adapted to the wide range of Oklahoma’s regions. Herman A. Hinrichs, OSU horticulture professor, continued the program until 1978. In 1990 the Oklahoma Pecan Field Station was closed, and pecan trees were planted at the Cimarron Valley Research Station north of Perkins. Since then, pecan research has been ongoing not only at the research station but at cooperating growers’ orchards and groves around the state.

OSU researchers have made many contributions to the worldwide management of pecans. Dr. Michael Smith experimented with crop load management to help alleviate alternate bearing in improved orchards. Today this is a common practice with over-bearing cultivars. He also introduced many nutrition recommendations for pecan management. Pests like pecan weevil and pecan scab have been studied to find best management practices for growers. Integrated pest management, using trapping and scouting for pests, and a Mesonet model for pecan scab advisory have been introduced to Oklahoma and regional growers. A Pecan Management Course was started in 1997 and continues to teach both new and experienced growers how to better manage their trees. The class meets monthly from February, when trees are dormant, until October, when harvest starts. The participants develop a plan for cultivation practices to perform routinely each year. More than six hundred students have taken the course.

Oklahoma has also been part of industry-wide efforts toward improvement. In the 1950s and 1960s technological developments in harvesting equipment eased the burden of shaking and hand-picking-up the crop. Trunk shakers (attached to a standard tractor) and self-propelled harvesters sped the process of harvest. Savage Equipment in Madill, Oklahoma, has influenced the way pecans have been harvested over the last fifty years. It continues as the largest pecan equipment dealer in the world.

Together, pecan growers and pecan shellers voted to implement a Federal Marketing Order (FMO), which became law in August 2016. Under the FMO the American Pecan Council was created to represent three regions of pecan-producing states. Oklahoma is in the central region and has several representatives on the board that oversee the FMO. The board comprises large growers, small growers, accumulators, and shellers. They hope to increase pecan demand by highlighting the many health benefits of pecans and by improving standards and storage of the valuable and perishable product. Two to three cents per pound of pecans sold is assessed to support marketing and research.

Oklahomans have always had a special relationship with pecans. Pecan trees can be found in residential lawns in older neighborhoods around the state, and the nuts are valuable ingredients in many traditional recipes. The official state meal of Oklahoma includes pecan pie as dessert.

The following (as per The Chicago Manual of Style, 17th edition) is the preferred citation for articles:
Becky Carroll, “Pecans,” The Encyclopedia of Oklahoma History and Culture, https://www.okhistory.org/publications/enc/entry.php?entry=PE025.