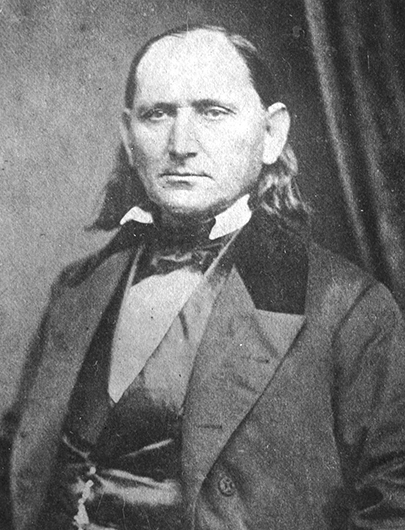 A prominent Choctaw leader during the removal period, Peter Pitchlynn played a major role in building the national tribal government in the nineteenth century. He was the son of John Pitchlynn, a white trader, and Sophia Folsom, a mixed-blood Choctaw. Educated as a youth at local schools, he attended the Choctaw Academy in Kentucky and the University of Nashville in 1827–28.

Pitchlynn thrived as a farmer, stock raiser, slave owner, and member of a small landed elite. Active in tribal affairs, he allied with Moshulatubbe against the missionaries and Greenwood LeFlore. Despite his opposition to the Treaty of Dancing Rabbit Creek, he sold his land holdings, led an emigrant party west in 1831, and settled his family on the Mountain Fork River near Eagletown (in present McCurtain County) in 1834.

In the postremoval era Pitchlynn emerged as an influential politician and diplomat. He helped reestablish the Choctaw Nation west of the Mississippi and establish a national school system. During frequent missions to Washington, D.C., he pushed Choctaw claims with the federal government and advocated settlement on behalf of Choctaws defrauded of their lands during removal. The Civil War forced him to return to his Mountain Fork home and sacrifice his pro-Union sympathies to protect his family and career. A compromise candidate, he was elected chief on October 6, 1864, and signed an armistice on June 19, 1865, at Doaksville. He also assisted with the peace treaty signed with the United States on April 28, 1866.

In 1867 Pitchlynn returned to Washington as the Choctaw delegate. While he pushed the Net Proceed Case for claims, he also espoused other issues that gained him support in the nation, especially among the full bloods. He vigorously and effectively opposed any threat to common ownership of tribal lands or Choctaw autonomy. He opposed the land allotment efforts of the federal government and the territorial bills advocated by the railroads and other land seekers.

Pitchlynn died at his Washington home on January 17, 1881, and was buried in the Congressional Cemetery.

Richard White, The Roots of Dependency: Subsistence, Environment, and Social Change Among the Choctaws, Pawnees, and Navajos (Lincoln: University of Nebraska Press, 1983).

The following (as per The Chicago Manual of Style, 17th edition) is the preferred citation for articles:
James P. Pate, “Pitchlynn, Peter Perkins,” The Encyclopedia of Oklahoma History and Culture, https://www.okhistory.org/publications/enc/entry.php?entry=PI013.