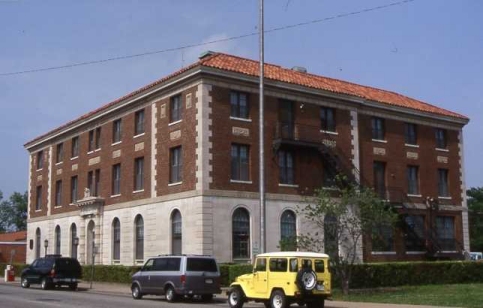 One of the hallmarks of a community's development was the establishment of a United States Post Office. In addition to being a vital communication means, particularly before the spread of telephone service and other forms of instant communication, a post office also represented recognition of the community at the federal level. Numerous Oklahoma towns date their earliest beginnings to the designation of a post office. Many also found themselves with new names or different spellings, as the postal service did not allow a state to have multiple post offices with the same name, and federal authorities, not familiar with local spellings, often applied their own version to the final name.

Typically, the first location of the post office was in a commercial building in the developing central business district, with the business proprietor acting as postmaster. For the first years, it was common for the post office to move around the maturing downtown, relocating in various brick buildings. Generally, the government did not undertake construction of substantial federal buildings in Oklahoma until after 1907 statehood. Other than the postal service, courts occupied the most substantial space within federal buildings, but only in the twenty-six Oklahoma communities variously designated as federal court towns. Federal marshals, Reclamation Bureau services, and Indian agents were also frequently quartered in federal buildings. Often viewed as "gifts," the usually imposing, multistory, stone federal buildings confirmed to the residents the importance of their community and the power of their congressional delegation.

Like post offices and other public buildings across the nation, many Oklahoma post offices also contained murals painted by artists, including members of the acclaimed Kiowa Five, working for the New Deal–era Public Works of Arts Program in the 1930s and early 1940s. The murals tended to be oriented toward local history, with typical themes in Oklahoma being American Indians and land settlement.

The following (as per The Chicago Manual of Style, 17th edition) is the preferred citation for articles:
Cynthia Savage, “Post Offices,” The Encyclopedia of Oklahoma History and Culture, https://www.okhistory.org/publications/enc/entry.php?entry=PO022.