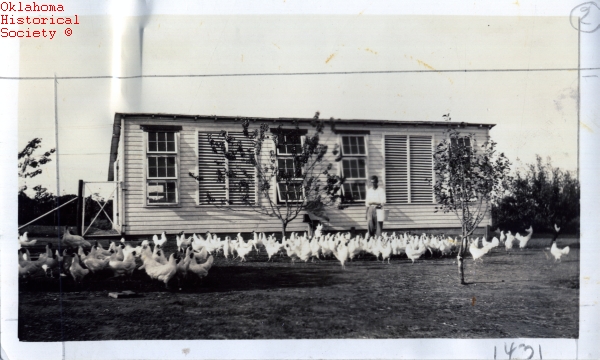 Since the early nineteenth century, domesticated chickens and turkeys have been a mainstay in Oklahoma. The birds were brought to Indian Territory by relocated southeastern American Indians, by farmers working on reservations, by troops stationed at forts, and by licensed traders, white intruders, and legal non-Indian settlers. After 1889 and the various land runs and lotteries most Oklahoma Territory newcomers who engaged in agriculture transported a flock with them. During the late nineteenth and early twentieth centuries women usually cared for the chickens, selling the eggs and/or poultry. These farms provided their own broiler and egg needs, supplementing their diets with fried chicken, often a Sunday treat.

In the early 1900s agricultural extension agents and the Oklahoma Board of Agriculture pushed rural residents to pursue poultry production, claiming that the state's temperate climate suited the industry. Breeding and showing prize birds spawned state, county, and town poultry shows. The Oklahoma Poultry Journal, published from 1911 at Mounds, catered to these enthusiasts. In 1915 the legislature passed House Bill 510, authorizing county commissioners to appropriate up to one hundred dollars per year to encourage residents to increase poultry production. In 1917 the solons created the Jackson Poultry Law (House Bill 642), named for Clifford Jackson, credited with writing the measure. It stated that every schoolhouse, except those in cities of the first class, must annually hold a poultry and egg show, and the law provided the necessary funding.

In 1910 Oklahoma A&M College (now Oklahoma State University) offered its first poultry class and in 1914 created the Department of Poultry Husbandry. Agricultural agents affiliated with the school traveled around the state to teach the skills of raising a flock. One such venture was a 1911 demonstration train called "the Poultry and Hog Special" that traveled the Missouri, Kansas and Texas and the Fort Smith and Western rail routes. In 1948 the department, through experimentation, developed a new chicken, the Oklahoma Dominant White. In 1955, after thirty-two years in the position, R. B. Thompson retired as the department's head.

By 1913 Enid stood as one of the largest poultry distribution centers in the Southwest. Swift and Company and Aaron and Company, the two biggest firms, along with Clark and White, the Enid Poultry Company, and Jacks and Company, shipped more than $3 million worth of turkeys and chickens that year and handled an estimated eighty-five hundred chickens a day. In 1925 Oklahomans had 13,831,000 chickens worth $8,714,000.

A national movement that focused on creating communities of poultry raisers was also represented in Oklahoma. In 1928 near Oklahoma City Gilbert A. Nichols spearheaded a poultry colony called Nicoma Park. The developers provided the essential equipment for chicken raising and egg production. They also sold the land tracts to the colonists. In turn, the residents later formed a cooperative, the Nicoma Park Egg Marketing Association, to sell their product.

After World War II the methodology changed for Oklahoma's poultry industry. In the mid-twentieth century Arkansas broiler chicken-processing plants, which capitalized on advancing technology, such as refrigerated trucks, began to expand into eastern Oklahoma. These companies used a vertical integration system, controlling all facets of production and contracting with area farmers to raise the birds. The parent company or subsidiaries provided its farmers with chickens, insurance, medication, supervision, feed, and the market, and the farmer contributed the buildings and labor. By 1961 Oklahoma ranked sixth in the nation in poultry and egg production value.

Periodically, the state attempted to regulate the industry. The Oklahoma Department of Agriculture took over the inspection of flocks from the Oklahoma Poultry Improvement Association after 1948. In 1947 the Oklahoma Legislature mandated, through House Bill 243, that to sell eggs the dealers must obtain a license from the Department of Agriculture. In 1957 Oklahoma passed a law requiring egg grading (House Bill 706), under which eggs below a certain quality could not be sold. It also set Oklahoma's standards identical to those of the U.S. Department of Agriculture in regard to egg size, quality, and grade. In 1991 the state allowed foreign and corporate ownership of land, which led to a boom in corporate hog and chicken farms. In the 1990s and early twenty-first century the state and its municipalities passed rules to regulate chicken litter and filed court cases against Arkansas poultry plants, alleging that they polluted Oklahoma's waterways.

The number of broiler chickens sold in Oklahoma increased from 13,218,885 in 1964 to 169,292,948 in 1997. By then, the shift in poultry production from western Oklahoma to eastern Oklahoma was seemingly complete. Le Flore County (9,387,630) led the state in broiler inventory, followed by McCurtain (8,174,443), Delaware (3,955,523), and Adair (2,182,694), with all of the top ten counties in the state's far eastern portion. This shift also included the egg industry, with Adair County leading in layer and pullet population with 934,267, followed by Delaware (913,014), McCurtain (593,459), Le Flore (186,273), and Cherokee (101,594). Central Oklahoma's Lincoln County (1,893) placed tenth. McCurtain County dominated in the amount of all poultry sold, with $110,427,000 worth. Although the contract chicken-raising system drew criticism and comparison to sharecropping, it still generated cash for eastern Oklahoma farmers at the beginning of the twenty-first century. In 2002 there were more than nine hundred poultry farms in the state, with seven large companies. These were Tyson Foods, OK Foods, Simmons Foods, Cargill Inc., Peterson Farms, Pilgrims Pride, and George's Inc.

Turkeys and other fowl have also contributed to Oklahoma's agricultural economy. In 1929 the state's domesticated turkeys numbered 230,000. Garfield, Washita, Comanche, and Cotton were among the counties that shipped large numbers of turkeys, especially in November and December. In 1940 there were 411,000 of these birds on state farms. In 1962 Oklahoma ranked sixteenth among states in turkeys raised, producing 24,467,000 pounds. In 1992 Cherokee County agriculturists reported the most turkeys (766,834), ranking it one of the top one hundred turkey-producing counties in the nation. Also raised and sold in Oklahoma are ducks (7,247 on 652 farms in 1997), geese (2,470 on 350 farms), pigeons (4,509 on 43 farms), pheasants (8,336 on 46 farms), and quail (41,120 on 55 farms). In 1997 poultry and poultry products contributed 12.4 percent of the state's value for livestock and their products. The state ranked eighteenth for the value of poultry and poultry products sold.

The following (as per The Chicago Manual of Style, 17th edition) is the preferred citation for articles:
Larry O'Dell, “Poultry Industry,” The Encyclopedia of Oklahoma History and Culture, https://www.okhistory.org/publications/enc/entry.php?entry=PO028.