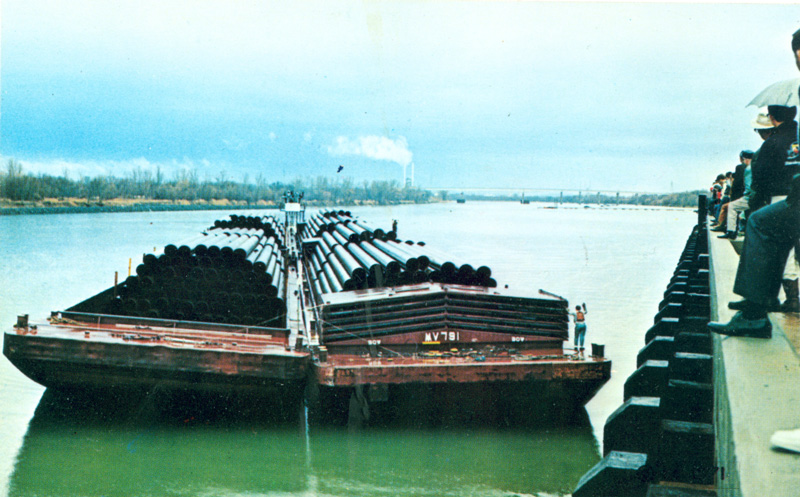 The Port of Muskogee is one of two public ports on the McClellan-Kerr Arkansas River Navigation System (MKARNS), a 445-mile waterway that links the Verdigris and Arkansas Rivers, the Arkansas Post Canal, the White River, and the Mississippi River. The facility is sited northeast of Muskogee near the Three Forks confluence of the Grand, Verdigris, and Arkansas rivers and is five miles from the city's business district.

Authorization was granted in 1938 for a feasibility study for commercial navigation on the Arkansas River. A five-year review having been completed, on July 24, 1946, Congress passed a Rivers and Harbors Act, allotting funds for a navigable waterway. Pres. Harry Truman signed the bill into law in that same year.

The U.S. Army Corps of Engineers's largest civil works project to date began in 1952 with reconstruction of river banks on the Arkansas. Construction of locks began in 1963. Total cost was estimated at $1.2 billion. Generation of hydroelectric power and flood control were two additional purposes served by the system of locks and dams.

When Congress appropriated the funds for an Arkansas River navigation system, Oklahoma's solons passed legislation authorizing cities to create port authorities. Muskogee's city and county governments cooperated to create a Muskogee City-County Port Authority. Its mission was to promote the construction of the inland port's facilities and to recruit cargo-handling, warehousing, and transportation industries to use them. In February 1969 ground was broken for a $2.5 million Muskogee Industrial Park. MKARNS opened to barge traffic as far as the Port of Muskogee on December 31, 1970, and was opened all the way to the new Tulsa Port of Catoosa, at the head of navigation, on January 21, 1970.

Through its Business and Economic Development Office, the Muskogee City-County Port Authority has worked in partnership with the City of Muskogee on developing investment and business opportunities in around Muskogee. In support of its economic development mission, the Port of Muskogee received designation as a foreign trade zone.

Kathleen M. Wallis, People of the Past: A Brief Guide to the McClellan-Kerr Arkansas River Navigation System from Catoosa to Fort Smith (Tulsa, Okla.: Corps of Engineers, Tulsa District, 1978).

The following (as per The Chicago Manual of Style, 17th edition) is the preferred citation for articles:
Michael J. Hightower, “Port of Muskogee,” The Encyclopedia of Oklahoma History and Culture, https://www.okhistory.org/publications/enc/entry.php?entry=PO033.