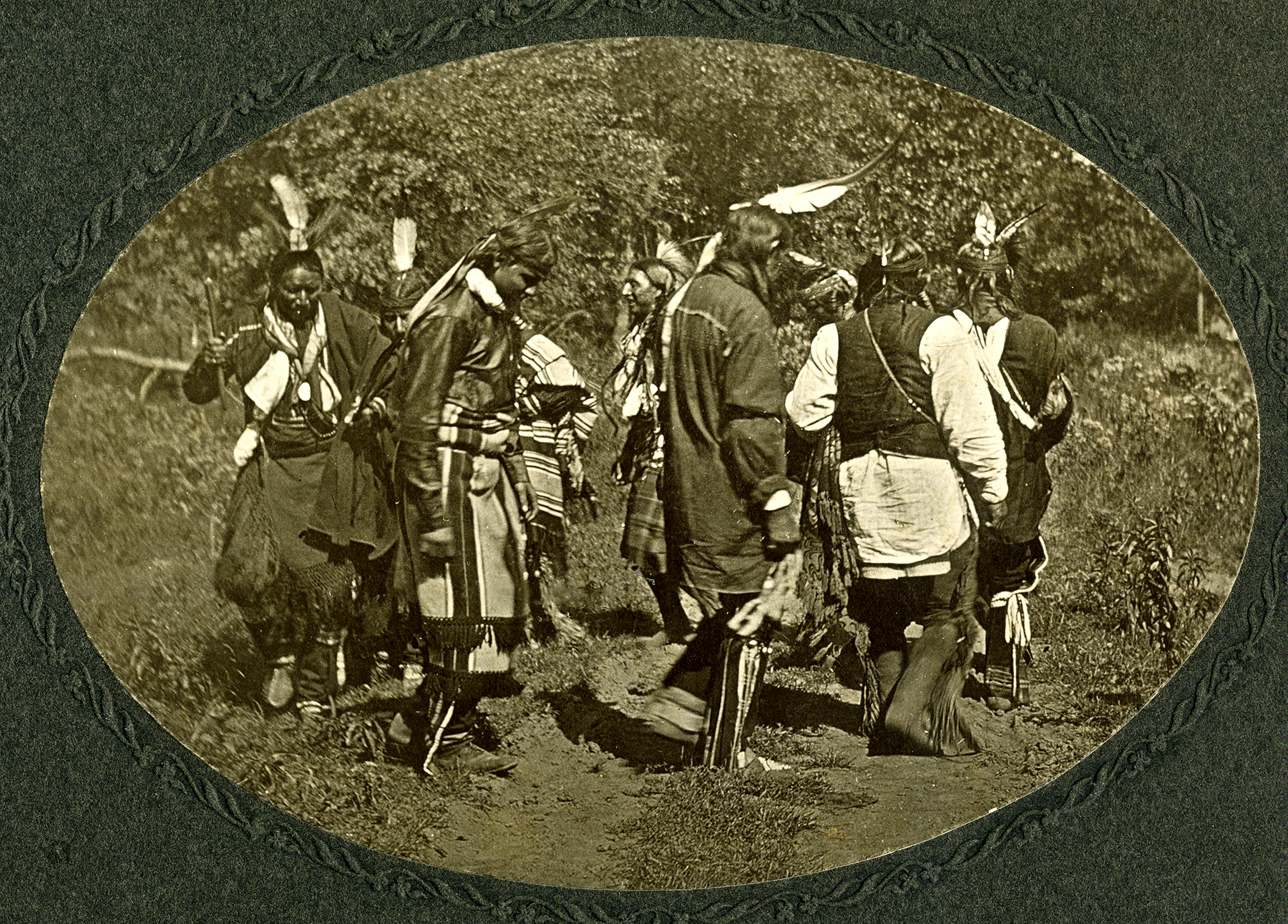 According to oral tradition, the ancestors of the Dhegiha, a group that included what would later be known as the Omaha and Quapaw, once lived together east of the Mississippi River near the mouth of the Ohio. Those who moved up the Mississippi and Missouri rivers became known as the Omaha ("those going upstream [or against the current]"), including those who would later be recognized as the Omaha, Kansa, Ponca, and Osage peoples. Those that moved down the river, toward its confluence with the Arkansas River, would later be known as Quapaw, the name of a major village that became the designation for the entire group. The name Quapaw derived from okáxpa, now also spelled ogahpah, is often interpreted as "those going downstream (or with the current)."

The Quapaw were probably residing in the Lower Mississippi Valley region by the late seventeenth century. The first recorded contact between Quapaws and Europeans occurred on July 16, 1673, when French explorers and missionaries Jacques Marquette and Louis Jolliet made their way down the Mississippi River and arrived at Quapaw villages along its banks about twenty miles north of the Arkansas. Villages were composed of clusters of bark-covered longhouses, in which several families resided. Each village had a leader advised by a council of male elders who independently managed their affairs. Life was ordered by various ceremonies, and family served as the basic unit of social organization. Ancestry was traced through the father, and children adopted their father's clan, a social unit associated with and named after a respected animal, celestial body, or weather phenomenon. Each clan had specific ceremonial responsibilities and was divided into two groups, the Earth People and the Sky People. The Earth People generally tended to administrative affairs and the Sky People to spiritual matters.

Following an alliance with the French, the Quapaw had brief interactions with the Spanish and English. The 1803 sale of Louisiana Territory by France to the United States, however, ushered in an era of removal for the Quapaw. Having reluctantly ceded their homelands to the U.S. government in 1818 and 1824, in January of 1826 they endured a long and terrible march to the Caddo Reservation along the Red River in northwestern Louisiana. The process of dislocation, and the harsh realities that accompanied it, are now referred to as the Quapaw "trail of tears." In 1833 the Quapaw affirmed their prior cessions and in 1834 relocated to a reservation established in northeastern corner of the Indian Territory.

In response to the Dawes Severalty Act (General Allotment Act) of 1887, and the anticipated eighty-acre land allotments it entailed, the Quapaws demonstrated strategic foresight. On March 23, 1893, they agreed to divide their communal lands into two-hundred-acre allotments, to which subsequent forty-acre parcels were added in 1894. This preemptive move provided enrolled members with three times the acreage than they otherwise would have received. In 1905 significant lead and zinc deposits were found on Quapaw lands, and its mining led to significant wealth. The peyote religion, later known as the Native American Church, was also introduced to the Quapaw during this period, which served to reinforce longstanding social and spiritual values.

The role of hereditary chief continued to serve as the form of principal leadership among the Quapaw until well into the twentieth century. The hereditary system of succession ended in 1918 with the death of Louis Angel, also know as Tallchief (Tahíkašte). Tallchief was also a respected spiritual leader. Although he had no male successor, his daughter, Maude Supernaw, continued some of his religious duties until her death in 1972. Since 1956 a business committee has been elected to serve a two-year term as the governing body. Composed of a chair, vice chair, secretary-treasurer, and four council members, the committee meets once a month to discuss administrative and financial matters. General council meetings are held annually on July 4, as are elections during designated years.

Dating to the early 1870s, by 1891 an annual homecoming picnic had become the annual Fourth of July powwow, one of the major summer events among American Indians residing in northeastern Oklahoma, and among the oldest such events in the state. This remains a special time of Quapaw celebration and expression shared with family, friends, and acquaintances. At the turn of the twenty-first century the Quapaw Tribe of Oklahoma numbered approximately two thousand, about one-quarter of whom resided within thirty miles of their national headquarters in Quapaw, Oklahoma.

Morris S. Arnold, The Rumble of a Distant Drum: The Quapaws and Old World Newcomers, 1673–1804 (Fayetteville: University of Arkansas Press, 2000).

The following (as per The Chicago Manual of Style, 17th edition) is the preferred citation for articles:
Timothy James McCollum, “Quapaw (tribe),” The Encyclopedia of Oklahoma History and Culture, https://www.okhistory.org/publications/enc/entry.php?entry=QU003.