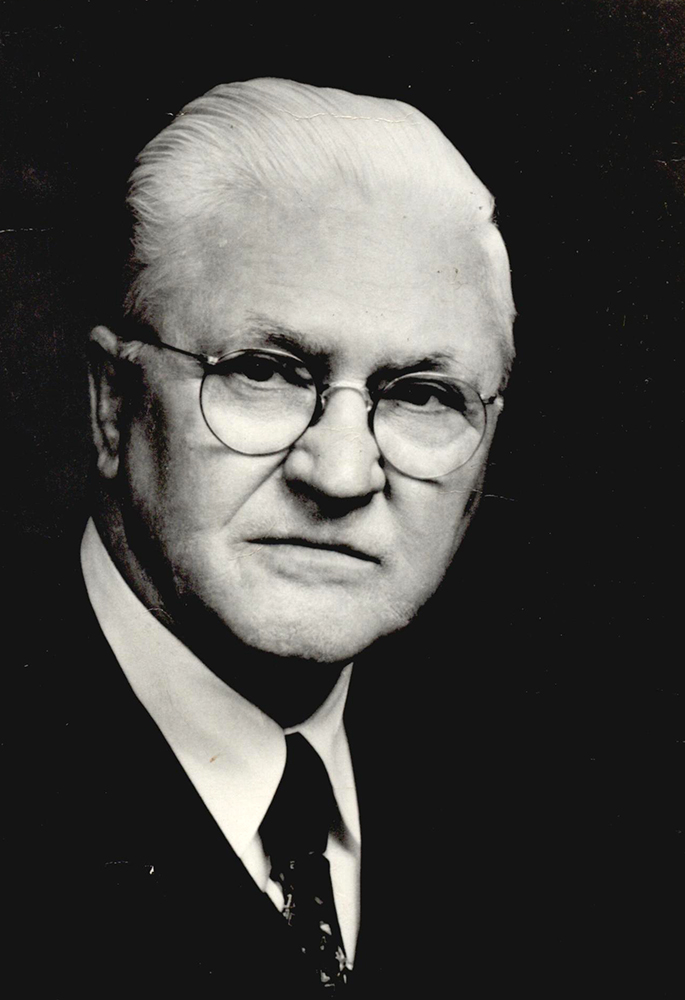 Born on August 30, 1906, between Hinton and Bridgeport, Rader gravitated towards politics early, driving William "Alfalfa Bill" Murray around western Oklahoma during his 1930 bid for governor. Already a successful businessman in Weatherford, where he attended Southwestern State Teachers College, Rader founded L. E. Rader Company, which focused on short-term loans and dealt in real estate. In 1928 he married Helen Parnell, but in 1930 they divorced and he wed Ruth Scheiner. When the hard times of the Great Depression beset western Oklahoma, Rader and his business ventures did not escape financial ruin, and he accumulated a large debt.

In 1932 Governor Murray appointed Rader as Custer County Relief Superintendent, a job he lost a month later because he was associated with a political enemy of Murray. However, Rader soon reclaimed the post. In 1933 he moved to Oklahoma City and worked for the Oklahoma State Tax Commission. Because a plan to tax coal producers provided revenue, he carried on with his commission position after Gov. Ernest W. Marland succeeded Murray, thus avoiding the political patronage then prevalent in Oklahoma. This scheme to bring more revenue into the state placed Rader at odds with Leon C. Phillips, who was involved in a coal company. In 1937 Rader became chief field auditor for the general enforcement division of the tax commission. In 1939 Phillips, now governor, dismantled the enforcement division, causing Rader to lose his employment. Rader then bought a Binger grocery store and soon expanded it to include dry goods, lumber, hardware, truck farming, and meat-processing.

In 1951 Gov. Johnston Murray, who was William's son, appointed a reluctant Rader director of the Department of Public Welfare, later DHS. The beleaguered agency suffered from scandals, neglect, scant funding, and poor leadership. Rader enthusiastically changed the operation. He built a program that distributed surplus commodities, bought by the U.S. Department of Agriculture from farmers, to Oklahoma's downtrodden. This became a model for other states. Rader masterfully learned to use federal government matching funds incentives, often turning federal funds into state funds to be matched two to one again. This, coupled with the fact that 2 percent of the state sales tax was earmarked for public welfare, created a large, influential welfare apparatus. In 1956 he attained a law degree from Oklahoma City University in order to enhance the guidance of his agency. He created pioneering Oklahoma programs for the mentally and physically handicapped, the elderly, juvenile delinquents, and other groups. The agency soon had a large surplus of funds and parceled out more help than ever.

This success did not go unnoticed by the state legislature or executive branch. To keep the state's general fund from deficit spending, governor after governor transferred departments to the shelter of Rader's welfare umbrella. This tactic freed up millions of state dollars, and Rader could get the most out of the welfare division.

Rader also garnered a national reputation. In 1959 he was named to the Board of Directors of the American Public Welfare Association, representing the southwest region of the United States. He helped U.S. Sen. Robert S. Kerr develop the 1960 Kerr-Mills Bill, which amended the Social Security Act (1935), set the stage for Medicaid, and thereby provided Oklahoma millions of federal matching dollars. Rader became a regular witness in federal hearings and debates on national welfare policies, a popular topic during the "New Frontier," "War on Poverty," and "Great Society." Pres. John F. Kennedy placed him on the President's Panel on Mental Retardation. Rader's success at gathering federal funds and his large budget, $235 million by 1966, caused many to criticize Oklahoma for being the nation's largest welfare state, but local media and politicians disputed this claim. According to historian Gabrielle Thurman, by 1970 Oklahoma paid out more in welfare than any of the six surrounding states.

In the 1970s, as Republicans gained more power in the national government, matching funds to the states dwindled, and Rader's budget became more of a challenge. In 1973 Gov. David Hall and the legislature transferred a decrepit Crippled Children's Hospital to the welfare agency to save. Rader stretched his administrative and financial limits to create a nationally recognized medical institution. In 1980 Gov. George Nigh tried to accomplish the same transfer with University Hospital. This challenge partly led to Rader's resignation in 1982. The acceleration of the completion timetable from six years to three years, along with a shrinking agency budget, caused Rader to have a financial shortfall in 1981, for the first time. Controversies and investigation hounded DHS and its director in the 1980s; these accusations ranged from child abuse in its facilities to patronage to illegal corporate hirings and abuse of the state bid system. Governor Nigh ordered the Oklahoma State Bureau of Investigation to conduct a probe. These problems and the changing political landscape forced Rader's retirement at the end of 1982. He served Oklahoma longer than any other Oklahoma division head, and only State Sen. Gene Stipe served longer as a politician. Lloyd Rader, Sr., died on December 6, 1986, in Oklahoma City. He had spent the previous four years as an advisor for the U.S. Congress and the president as well as St. Anthony Hospital.

The following (as per The Chicago Manual of Style, 17th edition) is the preferred citation for articles:
Larry O'Dell, “Rader, Lloyd Edwin, Sr.,” The Encyclopedia of Oklahoma History and Culture, https://www.okhistory.org/publications/enc/entry?entry=RA001.