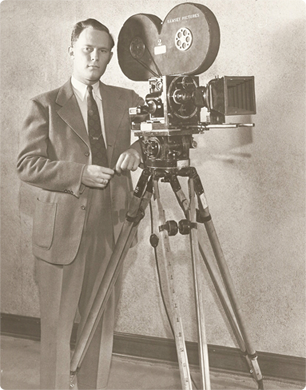 Newsreel photographer Arthur B. Ramsey was born on November 27, 1914, in Oklahoma City to Walter R. (known as W. R.) and Anna Ramsey. W. R., an Oklahoma oil man, made his first million dollars on royalties from a Louisiana oil well. In 1927 Arthur Ramsey's uncle gave him a hand-wind 35mm DeVry motion-picture camera as a gift. Ramsey filmed silent movie scenes around Oklahoma, and he fell in love with motion pictures. He became well known for his use of the professional DeVry format camera. One day he received a call from Pathé News asking him to go to Yellowstone Park to film scenes of Pres. Calvin Coolidge. The event began more than a decade of newsreel film production by Ramsey. In the years before television the public could only view recent news events by arriving at the movie theater in time to see the newsreel before the screening of the day's feature film. Various newsreel companies supplied local theaters with national and world news on film.

Wanting to encourage his youngest son's interest in film, W. R. Ramsey sent sixteen-year-old Arthur to shops in Hollywood, California, to buy one of everything he needed to make sound movies. Ramsey bought a 35mm Mitchell camera, a Moviola viewer, and Bardwell-McAlister and Mole-Richardson lights. Sound movies had begun in 1927 with the film The Jazz Singer. Three years later Ramsey brought sound film production to Oklahoma City with a full sound stage. To produce sound films also required racks of equipment, which Ramsey also brought home.

Ramsey had an office in the Ramsey Tower, a new Oklahoma City skyscraper that his father had built. A sound stage was set up in a building at 1220 West Main. By this unusual set of circumstances, during the Depression decade of the 1930s an oil-man's son introduced sound film to Oklahoma. He not only provided sound newsreels of Oklahoma people and events to the nation's movie screens, but also created industrial films for national companies such as Hershey's and and to operators in the Hereford cattle business. Ramsey's newsreels covered William "Alfalfa Bill" Murray's gubernatorial inaugural, Murray's famous Red River Bridge War with Texas, Machine Gun Kelly's federal trial for the kidnapping of Charles Urschel, and Alf Landon's presidential campaign, as well as events on Pawnee Bill's Ranch and the 101 Ranch. He produced interviews with Wiley Post's parents, and with Will Rogers, golfer Billy Jones, baseball player Pepper Martin, and numerous others. He filmed these and numerous other news stories for Paramount News, Pathé News, Fox Movietone News, and Hearst News.

When the war ended, Ramsey returned to Oklahoma. In 1946 he began a new career in the oil business, developing his own exploration company similar to his father's. After relocating to Albuquerque, New Mexico, in 1969, he continued in business until his death in there on April 16, 2000.

The following (as per The Chicago Manual of Style, 17th edition) is the preferred citation for articles:
Bill Moore, “Ramsey, Arthur Benjamin,” The Encyclopedia of Oklahoma History and Culture, https://www.okhistory.org/publications/enc/entry.php?entry=RA021.