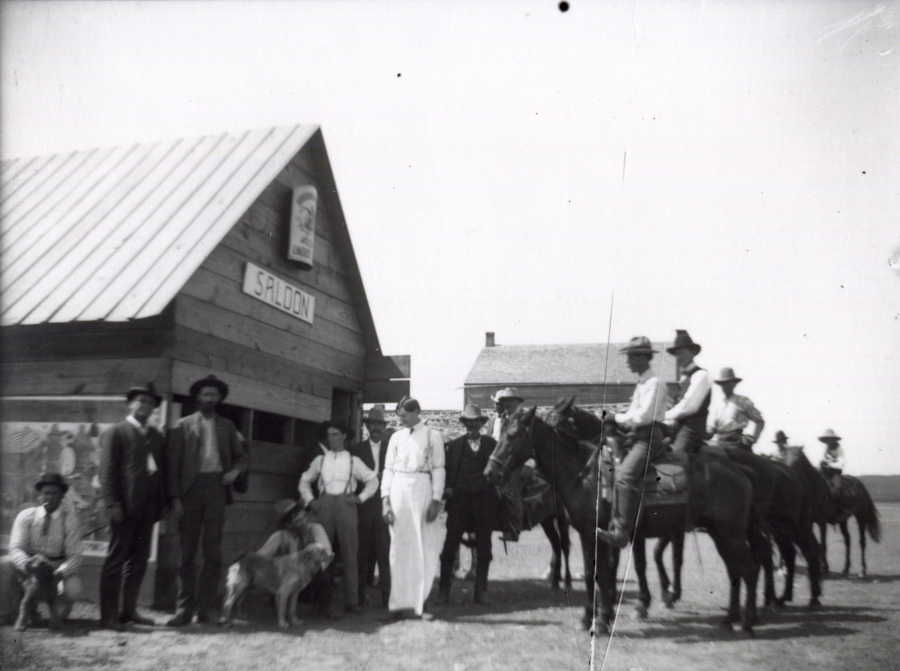 Located in northern Noble County six miles west of U.S. Highway 177 on State Highway 15, Red Rock lies in Carson Township sixteen miles north-northeast of Perry, the county seat. Long before non-Indian settlement the area was the Osage tribe's hunting grounds. The Otoe and Missouri tribes were moved onto a reservation in this area in 1881. Much of the reservation land was leased to the 101 Ranch, owned by the Miller Brothers, for grazing. Their headquarters was on the Salt Fork River, ten miles north of present Red Rock.

The Atchison, Topeka and Santa Fe Railway (AT&SF) built its tracks through future Noble County in 1886. With huge corrals being built near the railroad at Otoe Switch, several miles south, the area became an important shipping point for cattle herds in the Cherokee Outlet. No real towns yet existed, as the land belonged to the reservation, but a trading post operated at the railroad's crossing of Red Rock Creek. A designation of "Magnolia" was given to a post office there in March 1890 to serve the vicinity. In June 1892 Magnolia post office was redesignated Red Rock. An 1898 state gazetteer described Red Rock as "a shipping point of importance located on the AT&SF Railway at the point where that road crosses Red Rock Creek."

In 1902 and 1903 much of the Otoe-Missouri land was offered for sale, and in July 1903 the present town of Red Rock was platted in a new location and adjacent to the railroad in Carson Township. Lots were offered for sale on July 20. Buildings from Otoe Switch, six miles south, may have been moved north to the new site, which was situated on land owned by Joseph Plumley. Two banks incorporated immediately, and one built the town's first brick building in summer 1903. It was used until 1955 when the bank was sold to the First National Bank of Perry and the building demolished. A devastating fire in November 1913 destroyed an entire block of businesses, and in 1915 a public water works system was installed.

In 1910 the federal census recorded Red Rock's population at 378, and by 1917 the community numbered around five hundred residents. Serving a surrounding farming and ranching area were a bank, two drug stores, four grocery and general merchandise stores, two grain elevators, two hardware stores, a hotel, a café, and a lumberyard. Newspapers have included the Red Rock Opinion and the Red Rock Record.

The community's educational institutions had served a large area. In the late 1970s Oklahoma Gas and Electric Company built a generating plant six miles east of town. With the extra property tax money that the school district received, a new public-school campus was established one mile east of Red Rock, and a new school building was completed in 1982. In 1989 the patrons of the Marland School District decided to consolidate with Red Rock. As a result, the tax base grew much larger, enabling the community to develop one of the most modern schools in the state. The district's name was changed to Frontier.

Red Rock's population declined over the years. After hovering around four hundred in the 1930s, it reached 395 in 1940, its peak population. The number declined to 253 in 1950 and 233 in 1970. The remaining elevator, a cooperative, was sold to the Perry cooperative elevator company and then closed. Although no service stations or grocery stores remain, the town supports three churches, a garage, a feed store, and a pecan dealer. A new post office building was erected in 1985. The 2000 census recorded 293 residents. The population in 2010 was 283.

The following (as per The Chicago Manual of Style, 17th edition) is the preferred citation for articles:
Betty L. Waters, “Red Rock,” The Encyclopedia of Oklahoma History and Culture, https://www.okhistory.org/publications/enc/entry.php?entry=RE012.