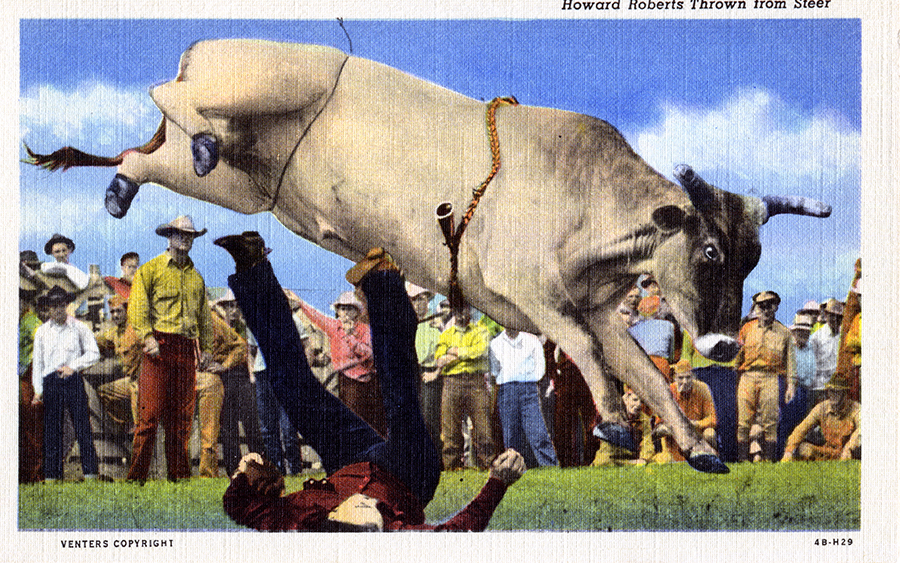 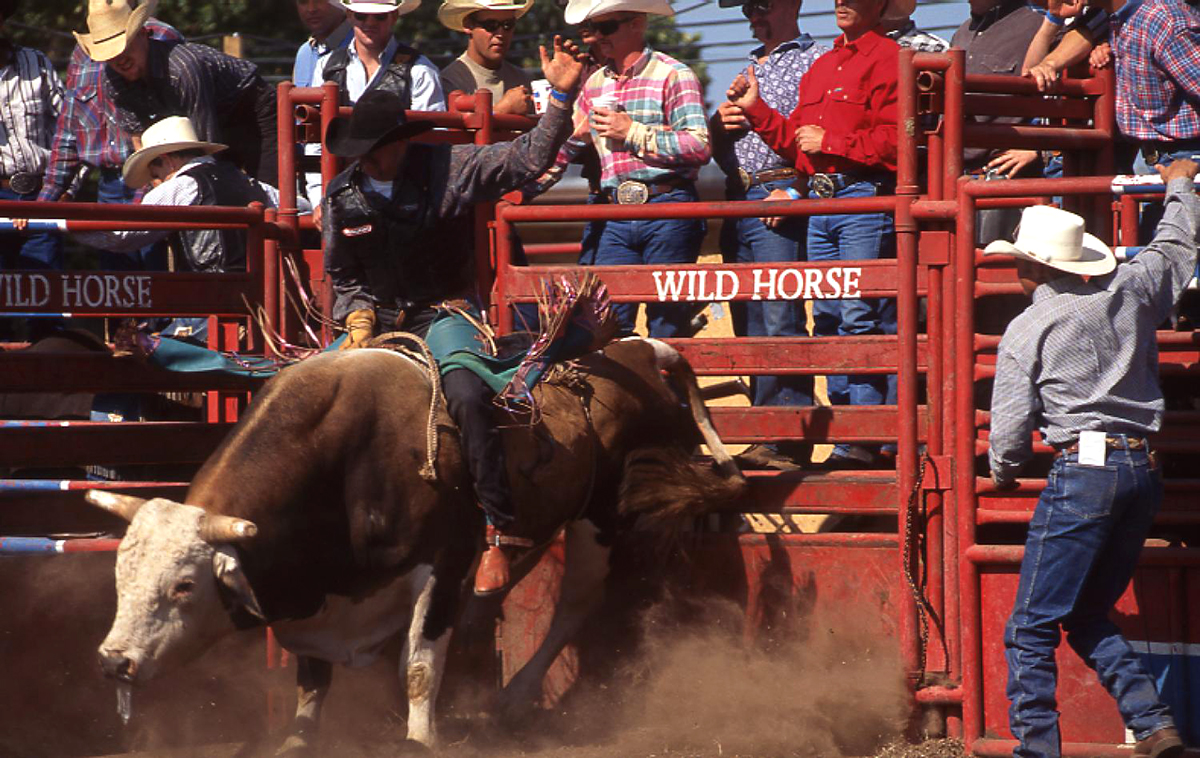 The sport of rodeo is the only American sporting event that grew out of an occupational activity: ranching. Rodeo's imagery has become so intertwined with the romanticized concept of the American cowboy that it has created a nostalgic aura permeating the culture of certain portions of American society, particularly the trans-Mississippi West region. The word "rodeo" is Hispanic in origin and refers to roundup. It was originally used to describe the activities at the occasional gatherings of regional ranch workers when the cowboys of particular ranches were pitted against those of others in riding and roping contests. By the mid-1880s these events became so popular across the West that they were held on a regular basis on Sunday afternoons and during holidays, particularly over the Fourth of July. The celebrated contests soon began to be formalized into advertised events. Contestants won prizes, and audiences paid admission fees. Although there is considerable debate about when and where the first formal rodeo took place, historians generally recognize that Pecos, Texas, in 1883 was the first to offer prizes and that Prescott, Arizona, in 1888 was the first to charge admission. With the formalization of rodeos the events began to be presented by rodeo producers. In much the same fashion as Wild West Shows and circuses, the rodeo came to include a host of specialty acts unrelated to ranching activities. Although modern rodeo retains some of the spectacle, such as the grand entry and rodeo clown acts, the primary focus has always been competition, in which cowboys win prize monies by their performance in various riding and roping contests.

Rodeo had no standard rules, and many billed their events as "world championships." Therefore, in any given year there were numerous claimants to the title of "world champion cowboy." In 1929 a group of rodeo producers formed the Rodeo Association of America (RAA) to standardize rules, establish a point system to determine world champions, monitor judges, and establish fair practices in awarding prize money. This caused considerable dissatisfaction among the rodeo cowboys, who had no organization to represent their interests. Trouble brewed. On October 30, 1936, sixty-one cowboys banded together and voted to strike the giant Boston Garden Rodeo to protest the paltry prize money. Three years later, on November 6, 1939, the men formed the Cowboys Turtle Association (CTA), to represent contestants' interests. In 1945 the CTA changed its name to the Rodeo Cowboys Association (RCA), which, in turn, some twenty years later became the Professional Rodeo Cowboys Association (PRCA).

In 1959, with interest in the sport growing, the PRCA added a National Finals Rodeo (NFR) as a culmination of the year's sporting activities. The NFR allows that year's fifteen leading contestants in each event to compete for significant purses. The competition many times determines the world championship in single events as well as the All Around World Champion. The first NFR was held in Dallas, but the venue was moved to Los Angeles from 1962 through 1964. Oklahoma City hosted the NFR for the next twenty years. Since 1986 the event has become a premier event in Las Vegas, Nevada, where it has grown into the largest and most significant rodeo in the world.

From rodeo's beginnings in the 1880s and through the 1930s women performed in the same contests as men. However, by the end of World War II women had been largely excluded from the PRCA events. Consequently, on July 4, 1948, they formed the Girls' Rodeo Association (GRA), later changed to the Women's Professional Rodeo Association (WPRA), to promote all-woman rodeos. Through the efforts of this organization, barrel racing became a sanctioned PRCA event. Since World War II a number of youth rodeo associations formed, including the National Intercollegiate Rodeo Association (NIRA) in 1949, the National High School Rodeo Association (NHSRA) in 1949, and the American Junior Rodeo Association (AJRA) in 1952. In recent years several "old timers" rodeo associations have developed to allow senior citizens to display their talents. Ranch rodeos have also revived, pitting cowboys from one ranch against those from another, much as was done at the beginning of the sport in the 1870s and 1880s.

The mystique of the cowboy, as manifested in "the rodeo cowboy," is particularly prevalent in the small town and rural areas of Oklahoma. That is where the equine business, an important part of the state's economy, is centered. This rural attachment to local rodeo harkens to the prestatehood era. The earliest recorded rodeo in Oklahoma was held in the mid-1880s at Benton, in the Panhandle (No Man's land). Local cowboys from regional ranches competed there. By 1891 several towns were well known for their shows, held on an irregular basis and at some time in the summer months following roundup. These events, focusing on riding and roping skills, were common across Oklahoma Territory by the beginning of the twentieth century. Contests are documented in such far-flung locations as Beaver County in the Panhandle (1891), Vinita in the northeast (1901), and El Reno and Shawnee in the central region (1901). In 1903 at Oklahoma City's Colcord Park twenty thousand spectators witnessed riding and roping contests as part of the entertainment presented in association with the Oklahoma Cattlemen's Convention. A huge success, the event was repeated for several years; in 1906 the featured attraction was a matched steer roping between J. Ellison Carroll of Mangum, who was billed as the world's champion steer roper, and the legendary Clay McGonigall of Texas, from whom Carroll had won the title the previous year. Carroll won the rematch and became something of a celebrity across Oklahoma.

The era between 1907 statehood and the end of World War I in 1919 witnessed the formal establishment of a regular schedule of rodeos around the state. Notable was the Dewey Roundup, begun in 1908 and operated continuously until the 1950s. In its heyday, this rodeo attracted thousands of spectators and featured the best performers in the nation during its three- to six-day run over the Fourth of July holiday. The Dewey Roundup's popularity prompted others; all of them featured a variety of entertainment activities harkening back to the Wild West shows of an earlier era. Typical was a 1909 stunt in which J. Ellison Carroll, riding in an automobile, roped a steer. As late as 1929 at Shawnee a rodeo cowboy attempted to bulldog a steer from an airplane; he missed and was arrested for failing to complete his contract. He was quoted as not understanding the charge, as he had completed the stunt a few weeks earlier at the 101 Ranch show (although he spent some time in the hospital after his plane crashed).

By 1938, 550,000 spectators annually attended scores of rodeos across Oklahoma. During this era, in 1934 the legendary Tulsa Stampede began a run that lasted until 1984. There Bob Wills and later his brother Johnnie Lee provided musical entertainment each year. Every town of any size had a local rodeo, and by the late 1930s the sport's tremendous popularity prompted the establishment of numerous roundup clubs. These organizations provided grassroots support for amateur rodeos and developed a host of riding and roping contests from which sprang numerous Oklahoma rodeo champions. In the early twenty-first century more than a hundred of these organizations existed in the state, providing training for budding rodeo performers or just plain fun for weekend sportsmen. Perhaps the most famous of these clubs is the International Roundup Cavalcade. Held at Pawhuska each year since 1947, it attracts as many as seventy-five roundup clubs and thousands of spectators to its amateur rodeo.

The following (as per The Chicago Manual of Style, 17th edition) is the preferred citation for articles:
Bobby D. Weaver, “Rodeo,” The Encyclopedia of Oklahoma History and Culture, https://www.okhistory.org/publications/enc/entry.php?entry=RO014.