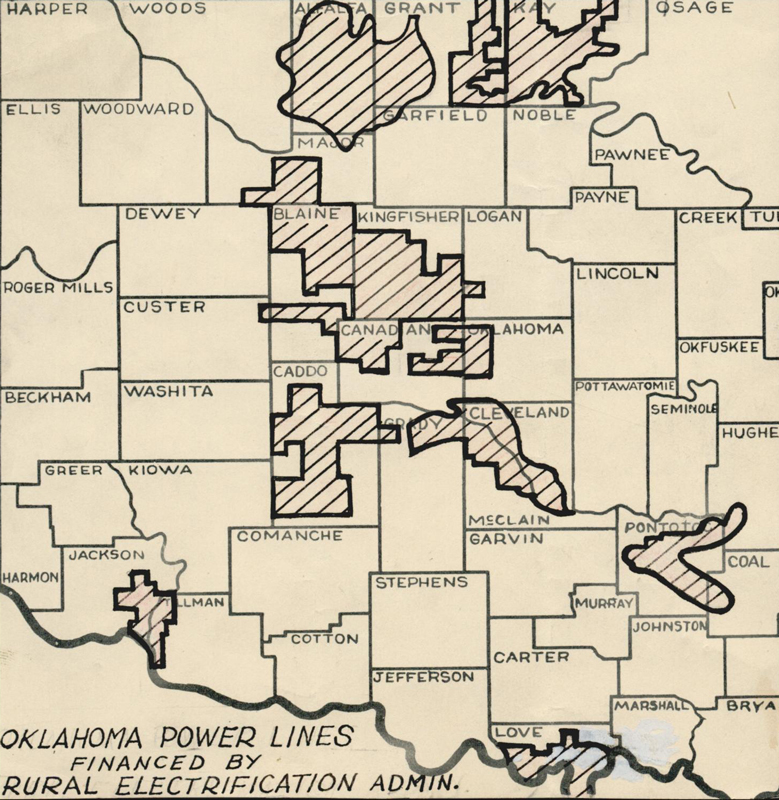 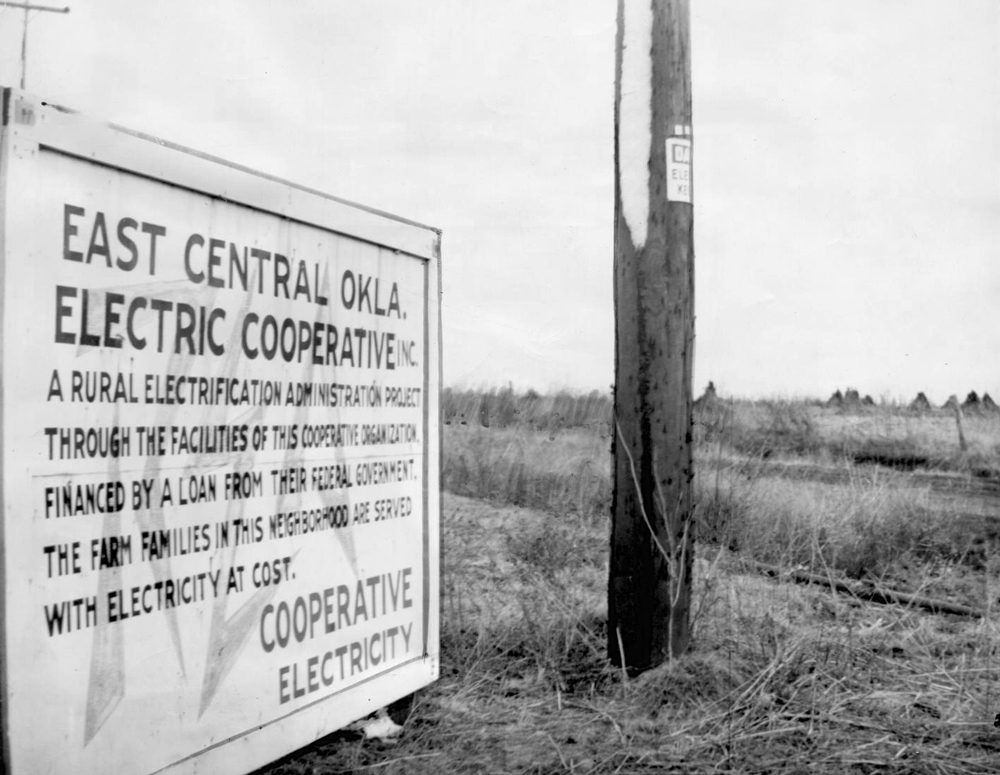 Introducing electric power to rural areas of the United States in the mid-twentieth century culturally transformed farm and ranch families. By the 1920s almost all cities and towns had electricity to power homes and business. By contrast, farms, ranches, and tiny communities remained in the dark until the advent of federally supported systems to deliver electricity to rural residents. In "the dark land" (in the words of government publications), candles or kerosene and coal oil lamps made light, and burning wood or coal provided heat for cooking and heating. In Oklahoma in 1920 approximately 4 percent had electricity. Nationally, by 1934 an estimated 11 percent of American farms had access to electric power, but Oklahoma lagged behind.

By the early 1930s, during the Depression, a prosperous farmer (if any still existed) could generate power at home. The family could purchase a "wind charger" (a windmill-like unit with vanes and a generator, set atop a tower, producing an electric current when the wind turned the vanes) or a "Delco system" (a gasoline engine that operated a small generator, with power stored in batteries). Either could be connected directly to a properly wired house or to batteries connected to house wiring. The family's truck or car engine and generator could be hooked to a battery or directly to wiring. Then the house or the barn could have a light, a radio, and small appliances. The process presupposed the farmer's financial ability to wire buildings and buy generators, batteries, light fixtures, and appliances. At that time, however, most farmers could not afford a truck or a car, much less a wind charger or a Delco setup.

Power companies provided electricity to urban areas but did not want to expand into rural America, where population was sparse and residences far apart. The cost of building substations and power-transmission lines from urban to rural areas seemed prohibitive, despite corporate studies showing that electricity greatly improved rural people's lives and agricultural productivity. For example, in 1923 the National Electric Light Association experimentally provided power to twenty farm homes. In 1925 the Oklahoma Gas and Electric Company conducted a satisfactory power transmission experiment with a farm near Pauls Valley and built short extensions to farms that were close to town. However, in the 1920s and 1930s declining agricultural prices followed by the Great Depression caused a rural-to-urban shift in population. Fewer people lived on farms, and urban areas grew larger and demanded more power. Utilities corporations chose to invest in urban, rather than rural, systems.

Almost at the beginning of Pres. Franklin D. Roosevelt's New Deal, the federal government became involved in rural electrification. Earlier, in the 1920s, the State of Pennsylvania had studied the actual cost of building rural power lines. The research revealed that the power corporations had greatly overestimated the cost, perhaps because they were for-profit entities with investors to pay. The Roosevelt administration acquired the data, published the study, and made a nationwide survey in order to inspire action on the problem. Oklahoma participated in the survey, under the direction of State Engineer Max Cunningham. Subsequently, President Roosevelt, in Executive Order 7037 (under by the Emergency Relief Appropriation Act of 1935) established the Rural Electrification Administration (REA) on May 11, 1935. In May 1936 the president signed the Rural Electrification Act, passed by Congress earlier that year.

The 1936 legislation outlined the goals, policies, and procedures that would be followed. It also defined "rural area" as any land outside the corporate boundary of a city, village, or borough whose population numbered more than 1,500; the definition took in both rural and semi-rural farm and ranch families. The Rural Electrification Administration (REA) managed the program. It made modest, low-interest-bearing, twenty-five-year loans to special rural organizations, called cooperatives, that were owned by a group of paying members. Essentially a not-for-profit corporation, a "co-op" would build and maintain its own power plants and lines and charge a reasonable fee for membership.

In nearly every state, rural-area farmers formed member-owned co-ops to borrow construction funds. Membership fees were used to pay back the loans and interest over the years. The REA could also loan a co-op's individual member 80 percent of the money needed to wire the farm or ranch house; the three-year loan carried 6 percent interest. The agency guided rural farmers to form the co-ops and also held classes to teach families the safe, efficient, and productive use of electricity.

Rural electrification worked a miracle in productivity when farms and ranches added power to household and agricultural tasks. Examples in the home included light fixtures, radios, hot water tanks, washing machines, irons, refrigerators and freezers for food preservation, and even ranges for cooking. Agricultural applications included items such as lights and chicken brooders in barns and irrigation machinery in fields. Many said that getting access to REA was like hiring a new farm hand. Ultimately, rural electrification also powered small rural industries. (It should also be noted that in post-war years propane also became a popular fuel source, especially for the household.) Electric lights in rural schools and homes made young people comfortable and able to study more. As the quality of common-school education improved, high-school graduation rates rose and colleges experienced an influx of rural youths. In addition, REA's member-owned cooperative transmission systems carried telephone service, with mixed results, on the same lines that carried electricity.

By the time of World War II in many states the regional co-ops had banded together into statewide associations in order to distribute information, widen their membership, and maintain standards for construction of generation facilities and lines. In the Sooner State the Oklahoma Association of Electric Cooperatives formed in 1942. Although the war halted power construction, in the post-war era the REA redoubled its efforts. According to REA statistics, by 1947 more than 57 percent of the nation's farms were electrified, and by 1950, more than 90 percent. By 1950 approximately 66 percent of Oklahoma farms and ranches had power.

The Rural Electrification Act has been amended several times to broaden its scope of services to rural communities. In 1949 Congress created a new REA loan program to improve and broaden the availability of rural telephone service. In 1994 REA became the Rural Utilities Service (RUS) a part of the USDA Rural Development Agency of the U.S. Department of Agriculture. In the twenty-first century RUS oversees both electric, water, and telecommunications projects. In 2017 the Oklahoma Association of Electric Cooperatives reported 29 member co-ops, of which 27 are in Oklahoma (2 in Arkansas). The co-ops maintained 116,609 miles of lines and served 627,980 meters, of which more than 82 percent were residential.

The following (as per The Chicago Manual of Style, 17th edition) is the preferred citation for articles:
Dianna Everett, “Rural Electrification,” The Encyclopedia of Oklahoma History and Culture, https://www.okhistory.org/publications/enc/entry.php?entry=RU007.