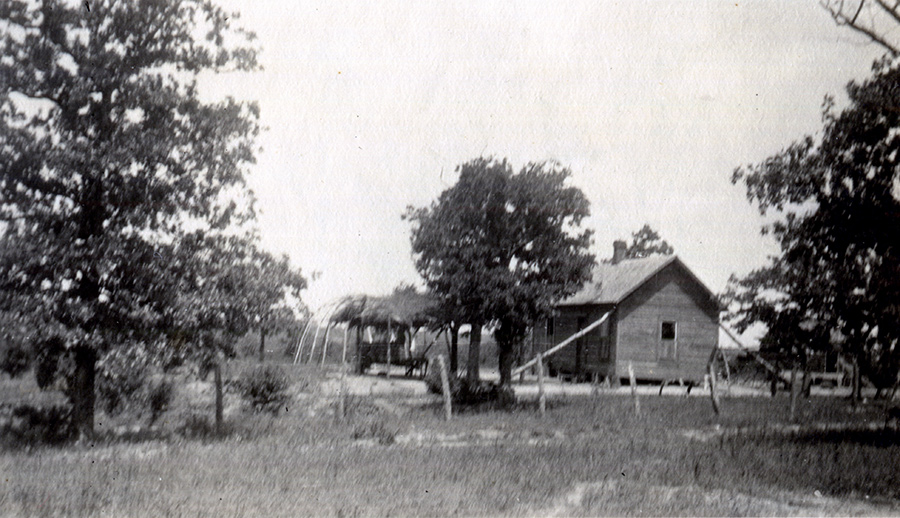 Born in Indian Territory near Tecumseh in 1883 (month and day unknown) on the Potawatomi-Shawnee Reservation, painter Ernest Spybuck (Shawnee name Maythela) was the son of Peahchepeahso and John Spybuck. Their son was educated in the Shawnee Boarding School and at Sacred Heart Mission. For most of his adult life he was occupied as a farmer, rather than as a professional artist. As late as 1938 he still relied on farming as a primary income. He spent his entire life in the area that became Pottawatomie County.

Ernest Spybuck began painting at around the age of six. His patron was anthropologist M. R. Harrington, who was to feature Spybuck's work in several ethnographic volumes that included material on the Shawnee and the Delaware. Harrington's interest in the young artist was driven by Spybuck's drawing ability and interest in portraying scenes of contemporary tribal life.

Typical of Native artists of his era, Spybuck used a simplified three-dimensional style, but his images were realistic and provided a central scene in perspective, with well-defined foreground and background. He did not use the flat, neutral-background style of other Indian artists. His paintings often recorded scenes he observed while attending ceremonies or social gatherings. The scenes are full of detail and portray both modern and traditional aspects of early-twentieth-century tribal life in his part of Oklahoma.

Spybuck's paintings became highly prized by collectors and found their way into significant public and private collections, including the Gilcrease Museum in Tulsa, the Fred Jones Jr. Museum of Art in Norman, the Heard Museum in Phoenix, the National Cowboy and Western Heritage Museum in Oklahoma City, the Oklahoma City Museum of Art, the Smithsonian Institution’s National Museum of the American Indian in Washington, D.C., and the Museum of the American Indian in New York. Spybuck died in 1949 near Shawnee.

M. R. Harrington, Religion and Ceremonies of the Lenape (New York: The Museum of the American Indian, 1921).

The following (as per The Chicago Manual of Style, 17th edition) is the preferred citation for articles:
Marshall Gettys, “Spybuck, Ernest,” The Encyclopedia of Oklahoma History and Culture, https://www.okhistory.org/publications/enc/entry.php?entry=SP017.