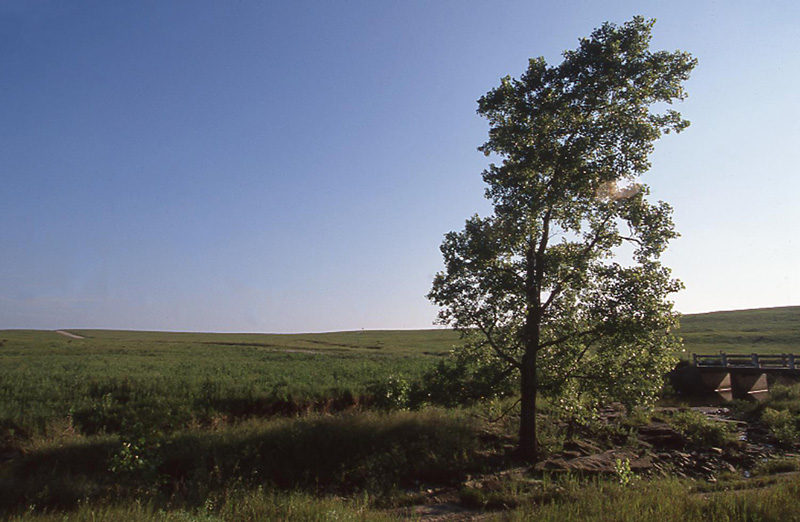 As early as the 1930s environmentalists began to push for conservation of America's tallgrass prairies. Comprising primarily big bluestem, little bluestem, Indian grass, and switchgrass, these prairies once existed in fourteen states from Minnesota to Texas. At the end of the twentieth century less than 10 percent endured. In the 1970s environmentalists began a serious movement to create a preserve in Osage County. In 1985 local proponents began to lobby for the U.S. government to buy the original Foraker Ranch, then owned by the Oklahoma Land and Cattle Company, or the Barnard Ranch in order to create a national park. Many area ranchers, oilmen, and members of the Osage Nation opposed the idea. After several compromises, in 1987 Sen. David Boren, Sen. Don Nickles, and Rep. Mickey Edwards sponsored a bill calling for a fifty-thousand-acre Osage County preserve to be operated by the National Park Service. When Edwards pulled his support, the attempt failed. This led the Nature Conservancy (an international conservation organization) in 1989 to purchase approximately thirty thousand acres of the Barnard portion of the Chapman-Barnard Ranch, which had been divided after James Chapman's death in 1966.

This acreage, with the addition of nearly eight thousand more, became the Tallgrass Praire Preserve, located north of Pawhuska and fifty-five miles northwest of Tulsa. The headquarters are in the former Chapman-Barnard Ranch main building, which has been listed in the National Register of Historic Places (NR 01000208). The preserve uses a yearly "patch burn," igniting one-third of the productive rangeland each year, to produce a biodiverse plant community. The park opened to tourists in 1991. In 1993 the preserve returned three hundred bison, donated by Oklahoma rancher Kenneth Adams, to the prairie. By the end of the twentieth century the herd had increased to twelve hundred. A yearly buffalo roundup administers medical maintenance and vaccinations and also culls the herd for bison that are sold.

Many Oklahoma oil companies and related businesses have financially supported the preserve. In 1993 the industry donated surplus oilfield pipe for fence posts to enclose the bison range. The park does not hold the land's mineral rights and does not interfere with production from the 107 operating oil wells on the property. This situation facilitates studies of the effects of petroleum extraction on the prairies' ecosystem. In 1998 the park's two-mile Prairie Earth Trail was dedicated. The preserve also has a road with four scenic turnouts. More than three hundred species of birds and eighty species of mammals have been identified on the property. At the end of the twentieth century the Nature Conservancy had an interest in fourteen Oklahoma properties. In 2004 the Tallgrass Prairie Ecological Research Station was completed.

The following (as per The Chicago Manual of Style, 17th edition) is the preferred citation for articles:
Larry O'Dell, “Tallgrass Prairie Preserve,” The Encyclopedia of Oklahoma History and Culture, https://www.okhistory.org/publications/enc/entry.php?entry=TA008.