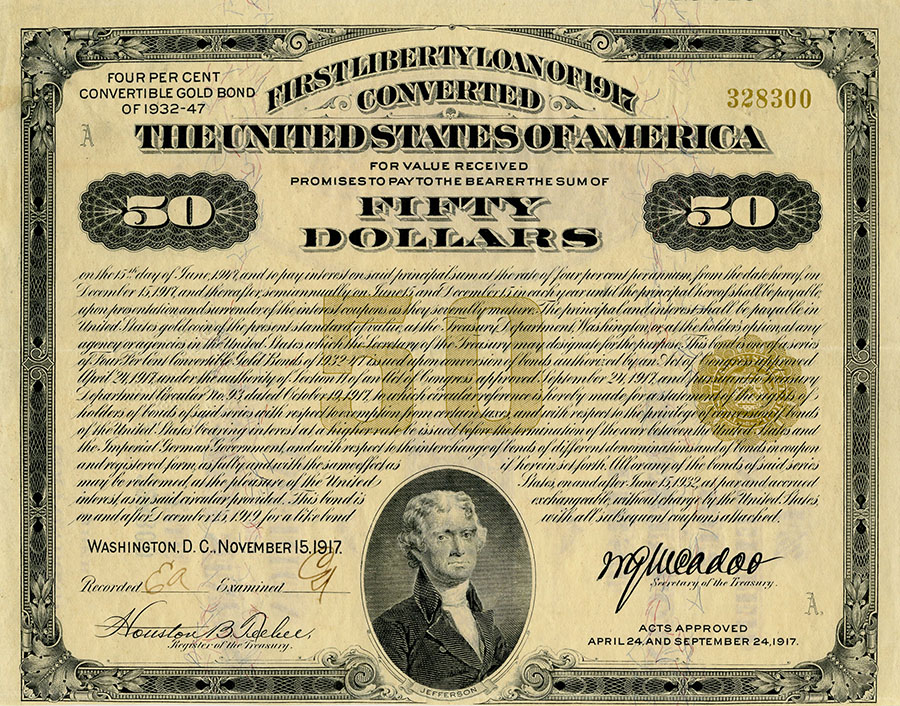 An attorney and Register of the United States Treasury during World War I, Houston Benge Teehee was born to Stephen and Rhoda Benge Teehee in Muldrow, Cherokee Nation (now Sequoyah County, Oklahoma) on October 31, 1874. Both parents were of Cherokee lineage. In his youth Houston Teehee attended the Cherokee Male Seminary in Tahlequah and received his higher education and law degree from Fort Worth University in Texas.

As a young man Teehee worked in retail sales and banking and was elected alderman of Tahlequah while studying law. He opened a law office there in 1908. In that year he successfully ran for mayor and briefly served as Cherokee County attorney. A Democrat, he soon went into state politics and was elected to the Oklahoma House of Representatives in 1911 and 1913. In 1915 his ambitions carried him onto the national stage, and he was appointed Register of the United States Treasury.

Teehee's rise to national prominence coincided with the advent of World War I in Europe. When the United States entered the conflict in April 1917, Teehee's position as Register of the Treasury made him a central figure in wartime finance. His duties led him not only to sign the templates for all new currency in the series that were printed in those years but also to sign every single Liberty Loan bond that the United States government issued from May 1917 through 1918 in order to fund the war. In so doing, Teehee suffered repetitive-motion injury that permanently damaged his right hand and arm.

After his federal service ended, Teehee returned to Oklahoma as a corporate officer for Seamans Oil Company. He continued his private law practice and in 1926 became Oklahoma's attorney general. He also served on the Supreme Court Commission from 1927 to 1931 and on the State Coordinating Board. He retired in 1939.

Teehee had a varied private life. He married Mayme Haglund of Tahlequah in 1889. He was a Mason, a member of the Knights of Pythias and of the Woodmen of the World, and a Presbyterian. In 1942 he was inducted into the Oklahoma Hall of Fame. He died on November 19, 1953, in Tahlequah, where he had lived in poverty since his retirement. In 2008 his portrait was installed in the House Lounge in the Oklahoma State Capitol.

Emmet Starr, History of the Cherokee Indians, Their Legends and Folklore (1922).

The following (as per The Chicago Manual of Style, 17th edition) is the preferred citation for articles:
Dianna Everett, “Teehee, Houston Benge,” The Encyclopedia of Oklahoma History and Culture, https://www.okhistory.org/publications/enc/entry.php?entry=TE030.