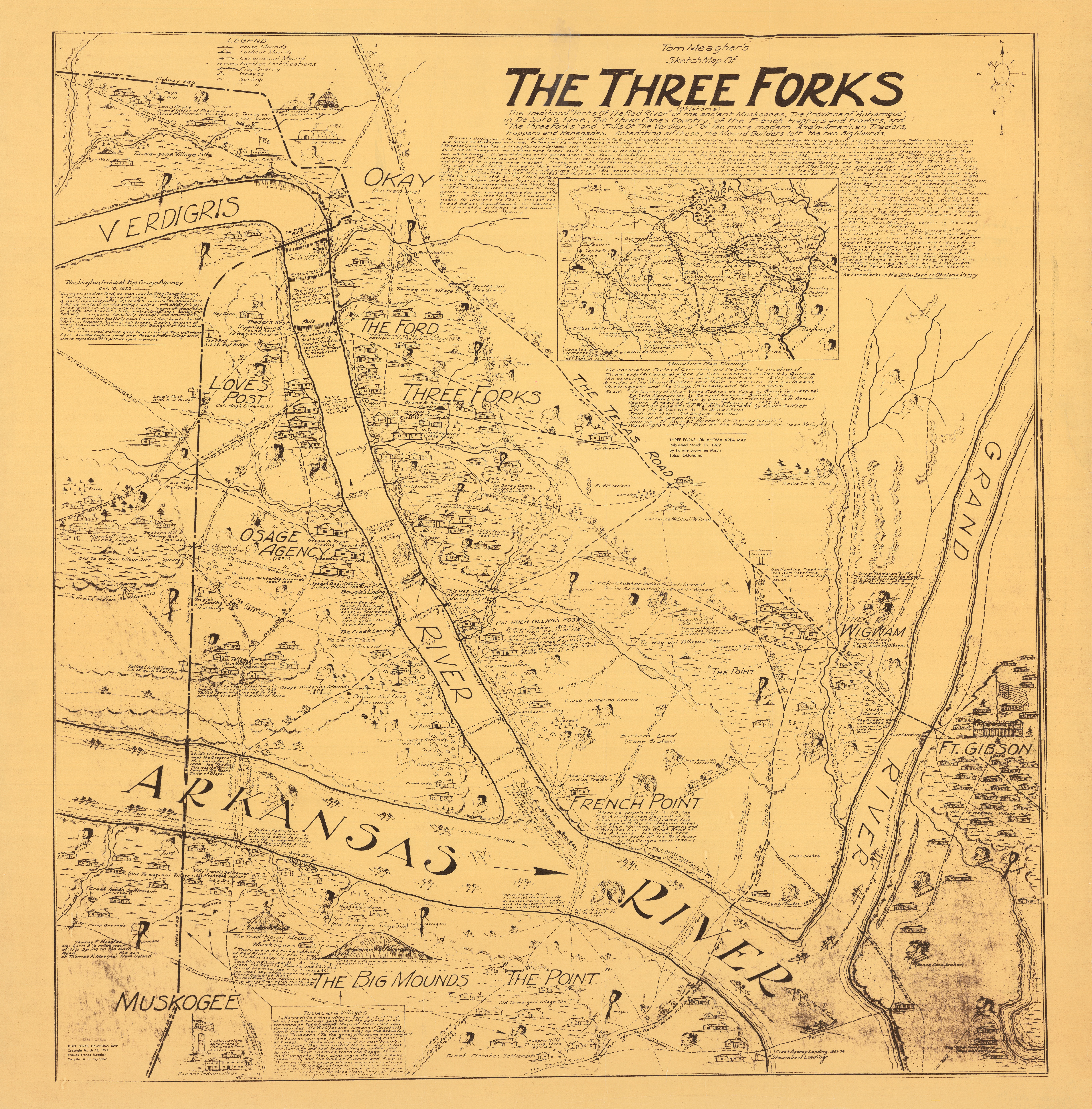 The region around the confluence of the Arkansas, Neosho (Grand), and Verdigris Rivers, in present Wagoner, Muskogee, and Cherokee counties, was the site of significant Euroamerican settlement in Oklahoma. In the early 1800s these streams were thought to be three forks of the Arkansas River. Physiographically, the region is in a transition zone between the Ozark Mountains to the east and the Cross Timbers/Sandstone Hills to the west. Vegetation is a mosaic of mixed-oak forest, tallgrass prairie, and hardwoods. Precipitation is abundant, with forty or more inches a year common in the wide bottomland of the three forks juncture.

The area's rich resources drew many Indian nations, including the Caddo, Osage, and Wichita. The Osage, for example, accessed salt deposits, hunted plentiful fur-bearing animals, and pursued nearby bison herds. Archaeological evidence supports Native settlement in the area since at least 5000 B.C.

Until the late 1700s few Euroamericans had explored the region. A notable exception, Jean Pierre Chouteau, operated a successful trading business from his St. Louis headquarters. As early as 1796 Chouteau established a trading post along the Neosho River at present Salina and encouraged many Osage to move nearby in order to facilitate trade. Chouteau's son Auguste Pierre later managed the post, expanded trading operations, and constructed a new facility on the Verdigris River. Other Euroamerican traders established nearby posts, and the region became an important economic node for the exchange of furs (including beaver, bison, and deer) and European trade goods. The Arkansas River provided an easily accessible route to eastern markets.

Hunting and trapping began to decline, and by the 1830s the region's economic base had changed. Economic transformation was augmented by cultural change as the arrival of dispossessed Southeastern Indian nations, including the Cherokee and Creek, further altered the region's personality. These new residents pursued subsistence and plantation-style agriculture and maintained sizeable herds of open-range cattle. Large-scale Indian agriculturalists continued to use the Arkansas River system to export their crops, typically cotton, corn, rice, and wheat.

Increasing settlement, both Native and Euroamerican, necessitated the 1824 construction of Fort Gibson on the Neosho River. The fort coordinated Indian arrivals and provided military protection for the region until 1890. The area near the Three Forks continued to be an active economic location, particularly as traffic on the nearby Texas Road increased. This thoroughfare linked northeastern Indian Territory to north Texas and to Missouri and was regularly used by traders, emigrants, and the military. In 1872 the town of Muskogee moved adjacent to the Missouri, Kansas and Texas Railway line and quickly grew into the primary regional economic hub and multicultural center of white, African American, and Indian population.

At the beginning of the twenty-first century the Three Forks area experienced population and economic growth, partly due to its location astride the U.S. Highway 69 corridor and its proximity to metropolitan Tulsa. The population base remained diverse, with African American and American Indian nations represented in significant numbers. Recreation is a key amenity of the region, with fishing, boating, golf, and hiking popular activities.

Douglas A. Hurt, "Brothers of Influence: Auguste and Pierre Chouteau and the Osages before 1804," The Chronicles of Oklahoma 78 (Fall 2000).

The following (as per The Chicago Manual of Style, 17th edition) is the preferred citation for articles:
Douglas A. Hurt, “Three Forks Area,” The Encyclopedia of Oklahoma History and Culture, https://www.okhistory.org/publications/enc/entry.php?entry=TH019.