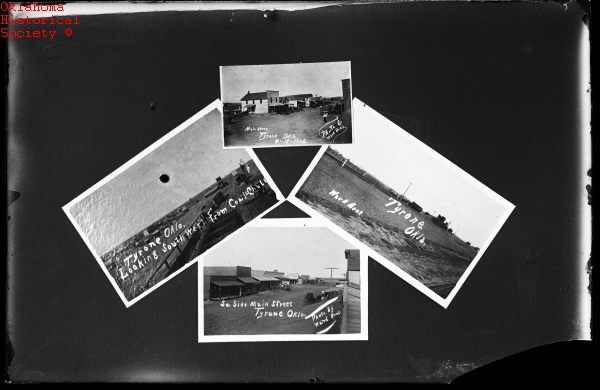 Located in the northeastern corner of Texas County, in the Oklahoma Panhandle, Tyrone lies on U.S. Highway 54, midway between Hooker, Oklahoma, and Liberal, Kansas. Originally, the entire Panhandle was included in Beaver County, Oklahoma Territory. The Chicago, Kansas and Nebraska Railway completed its line south to Liberal, Kansas, in 1888. The railroad built a spur to a spot seven miles southwest of Liberal, about three miles inside the Public Land Strip (the Oklahoma Panhandle), and installed pens and loading chutes. To the southeast, they established a cattle-watering area called Shade's Well. Meanwhile, about three miles from Liberal, a community called Tyrone developed in 1888, and in May 1892 its post office was moved south into the newly designated Beaver County, Oklahoma Territory, near the spur and loading pens. In the 1890s the Tyrone-Shade area provided a major shipping center for herds from five states and territories.

In 1901 the Chicago, Rock Island and Pacific Railway officially extended the rail line southwestward across Beaver County. A "new" Tyrone community grew up at the tracks and received a postal designation as Tyrone, Oklahoma Territory, in July 1902, with Hettie A. Duffy as postmaster. Tyrone was the first station south of Liberal. By 1905 the railroad had completed a depot complex, and Tyrone grew rapidly as a shipping point for cattle and grain.

After Beaver County was divided at 1907 statehood, Tyrone was situated in Texas County. By 1909 the town had an estimated population of five hundred, a Baptist and Methodist church, a public school, and a bank. H. L. Huber's general store was one of three patronized by residents. A cotton gin and feed yard were available to area farmers. A brass band and A. J. Hughes's pool hall provided entertainment. The Tyrone Observer printed the news from 1904 through the mid-1940s, after which the Guymon Observer supplanted it. In 1912 the sparsely occupied, four-city-block town had an estimated population of 260, and two grain elevators served the agricultural area. Wheat was the main product, and cattle raising provided additional income. Some oil and gas production developed in the surrounding region in the 1920s. The state legislature approved Tyrone's incorporation in March 1915. The town claimed a trade territory of almost six hundred square miles, from Kansas to the Beaver (North Canadian) River, and by 1927 wheat production kept five elevators busy. The first official census, taken in 1930, recorded 482.

Tyrone's population declined to a low of 257 in 1940, due to the Dust Bowl era drought and the Great Depression, but it rebounded thereafter, reaching 456 in 1960 and peaking at 988 in 1980. During the 1940s and 1950s approximately a dozen businesses still operated, including an elevator. Into the 1990s Tyrone's residents still supported four churches, an elementary school, a high school, and ten retail enterprises. Two oil-field roustabout services and a grain elevator operated there. The Union Pacific provided rail service. In 1990 and 2000 the census recorded 880 inhabitants, but the town grew to 762 by 2010.

The following (as per The Chicago Manual of Style, 17th edition) is the preferred citation for articles:
Dianna Everett, “Tyrone,” The Encyclopedia of Oklahoma History and Culture, https://www.okhistory.org/publications/enc/entry.php?entry=TY001.