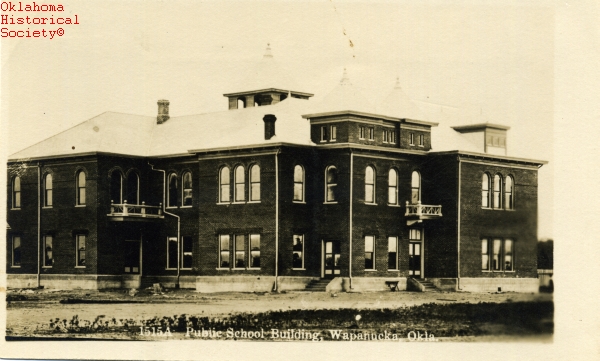 The town Wapanucka (pronounced Wop´-uh-nuck´-uh) is located in northeastern Johnston County at the intersection of State Highways 7 and 48, twenty miles northeast of Tishomingo. The name, which means "Eastern Land People," refers to the Delaware Indians who came to the area before the Civil War. In 1851–52 the Chickasaw Nation and the Board of Foreign Missions of the Presbyterian Church constructed Wapanucka Female Manual Labour School. The institute, named for a nearby creek, which honored the Delaware, opened in 1852. Locals called the school Allen's Academy, for James S. Allen, who supervised the establishment, and later many used the name Rock Academy for the impressive stone building. In 1860 the mission board withdrew their support, and the school closed. During the Civil War the Confederates used the building as a hospital and a prison. After the war the academy reopened, serving male and female students. In 1883 the Post Office Department designated a Wapanucka post office for the institute. In 1890 it became a boys' school, and in 1911 it was permanently closed and the property sold.

In 1888, after learning that a railroad might be built between Haileyville and Ardmore, the post office moved four miles east to Button Springs, an area on the proposed route. The Western Oklahoma Railroad, which became the Choctaw, Oklahoma and Gulf Railroad (CO&G), did not lay the tracks until 1902. In 1901 Wapanucka had an estimated population of 217. Businesses included general stores, a blacksmith, a hotel, a cotton gin, a sawmill, a gristmill, a drugstore, a millinery store, and a barbershop. In 1902 J. T. Payne surveyed the town, the U.S. Department of the Interior approved the survey, and the town incorporated through the U.S. District Court system. Before 1903 Wapanucka students attended a subscription school. At 1907 statehood the population had reached 789.

Transportation access caused the town to grow. In 1908–10 the Missouri, Oklahoma and Gulf Railway (acquired by the Kansas, Oklahoma and Gulf Railway in 1919) laid tracks through the region, crossing the CO&G at Wapanucka. The 1910 population stood at 948. In 1911 two banks, a newspaper, the Wapanucka Press, a hotel, five general stores, a blacksmith, a dentist, two doctors, a livery, two cotton gins, the Indian Territory Cotton Products Company, and other retail outlets served the town's residents.

In 1917 the Dale Manufacturing Company located at Wapanucka to produce dye and tanning extracts from bois d'arc wood. This was one of the nation's first plants to use the method, which was urgently needed when World War I ended dye importation from Germany. In 1920 the population reached the town's U.S. Census high of 1,038. As with other Oklahoma towns, the cotton industries decline and the Great Depression negatively impacted Wapanucka. Its population dropped to 553 in 1930 but rose to 740 by 1940. In 1938 the CO&G, then owned by the Chicago, Rock Island and Pacific Railway, abandoned its area line. In 1946 the town maintained a cotton gin, but gas stations and grocery stores comprised the bulk of the business district.

In addition to ranching and farming, petroleum and natural gas and limestone quarries boosted the area's economy. The population declined to 459 in 1960, reaching 425 by 1970. In 1972 the Wapanucka Academy site was listed in the National Register of Historic Places (NR 72001065). In 1984 a branch of a Tishomingo bank opened in Wapanucka. In the year 2000 Wapanucka's prekindergarten-through-twelfth-grade school enrolled 224 students. The population stood at 445 at that time, and in 2010 it had declined slightly to 438. Members of the community's Cartwright family served in state politics throughout the twentieth century.

The following (as per The Chicago Manual of Style, 17th edition) is the preferred citation for articles:
Larry O'Dell, “Wapanucka,” The Encyclopedia of Oklahoma History and Culture, https://www.okhistory.org/publications/enc/entry.php?entry=WA019.