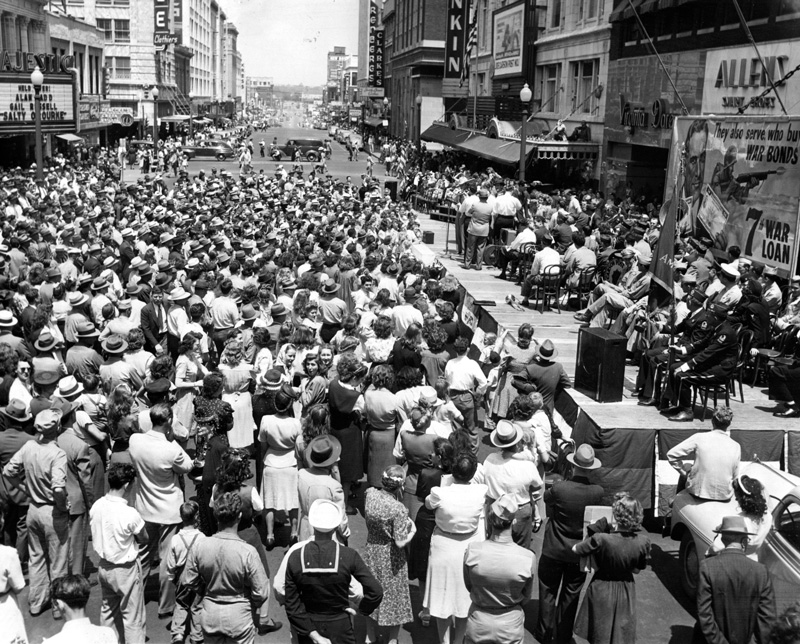 The campaigns to encourage Americans to buy U.S. Treasury bonds to finance World Wars I and II were known as war bond drives. Because mass media (radio, newspapers, and magazines) publicized the importance of every citizen's support in the war effort, the campaigns succeeded. During World War I the federal government raised $5 billion through the sale of Liberty Bonds. Between November 1942 and December 1945 Americans invested in approximately $150 billion in bonds to finance World War II.

During World War I Oklahomans responded to the call by oversubscribing in each of the four Liberty Loan drives as well as in the last campaign, known as the Victory Liberty Loan drive. On April 24, 1917, the First Liberty Loan Act was passed, authorizing the Treasury Department to issue bonds and providing for loans to the Allied powers. Pres. Woodrow Wilson appointed muckraking journalist George Creel to develop a propaganda campaign to induce Americans to buy bonds. Posters appeared showing Germans committing atrocities such as burning homes and destroying cities. Slogans abounded, such as "Buy Bonds Till It Hurts" and "Come Across or the Kaiser Will." Anyone who did not support the war effort was called a "slacker." Strong-arm tactics, with threats of being picked up by the "slacker wagon" or being ridiculed in public, were used to force citizens to buy bonds. After the Green Corn Rebellion in Oklahoma resulted in negative publicity at the national level, Oklahomans worked diligently to overcome the bad image by oversubscribing in the bond drives. For example, in the final campaign Oklahomans subscribed to $33.3 million, exceeding the state's quota of $30.7 million.

Apparently, Oklahoma built the nation's first war savings stamp bank. Dedicated on March 11, 1918, it was located east of Broadway Street in the center of Main Street in Oklahoma City. E. Richard Carhart, chair of the Oklahoma County war bond campaign, originated the idea. The concept was continued in other Oklahoma cities and throughout the nation.

During World War II Secretary of the Treasury Henry Morgenthau, Jr., believed that the average citizen could help win the war by buying war bonds. Using the appeal of popular culture, Hollywood's movie stars toured the United States, and singer Kate Smith raised $39 million through a radio broadcast. In September 1942 actress Bette Davis attended several bond rallies in Oklahoma. The cartoon characters Mickey Mouse and Popeye appeared on posters. Eight bond drives, with the last one known as the Victory Loan campaign, were publicized with reference to supporting the military. Beginning in 1942 Americans could buy bonds on an installment plan through payroll deductions at their work places. An installment plan was also established for children. They could buy a twenty-five cent stamp and paste them in a book until they had saved the $18.75 needed to purchase a twenty-five-dollar bond.

Beginning with the third drive in 1943, Sidney C. Bray, a national sales promotion manager for General Motors, was appointed Oklahoma's War Finance Program director. He established a state committee of volunteers, primarily bankers. Volunteer committees were formed in many towns, and county workers were asked to canvass the rural areas. To gain the public's attention, statewide kickoffs started each drive. Contests were held, and prizes such as confiscated German canteens were awarded to individuals with the highest sales.

In order to meet Oklahoma's quota during the fourth bond drive Gov. Robert S. Kerr proclaimed "U" Day ("putting the U back in the U.S.A.") on February 14, 1944. Schools closed at noon so that children could canvas their neighborhoods in order to garner more subscriptions. Merchants were asked to close their businesses around the noon hour so that employees could buy bonds. Banks and building and loan associations had extra clerks to handle the increased volume. As a result of the intensified effort Oklahoma exceeded its $90 million quota by $8 million in the fourth drive.

The sale of bonds continued after World War II and into the twenty-first century. Following the terrorist attack on the World Trade Center towers in New York City on September 11, 2001, the Treasury Department announced that funds raised by the sale of Series EE U.S. Savings Bonds inscribed with the legend "Patriot Bonds" would contribute to the government's efforts to combat global terrorism.

Charles W. Smith, "The Selling of America in Oklahoma: The First and Second Liberty Bond Drives," The Chronicles of Oklahoma 73 (Winter 1995–96).

The following (as per The Chicago Manual of Style, 17th edition) is the preferred citation for articles:
Linda D. Wilson, “War Bond Drives,” The Encyclopedia of Oklahoma History and Culture, https://www.okhistory.org/publications/enc/entry.php?entry=WA020.