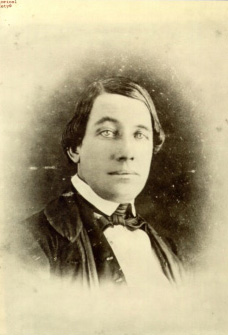 Abel Warren, born in 1814 at Northborough, Massachusetts, migrated west at an early age, arriving in Fort Smith, Arkansas, in 1835. He soon established a trading post in Fannin County, Texas, but abandoned it, unable to trade with American Indian tribes that stayed farther west. Warren decided to take his business closer to the tribes and north of the Red River. He had an early association with trader Holland Coffee, but whether they were partners, or Abel was an employee, or the two were eventually rivals, is unclear. Most sources indicate that Warren's Post stood on Cache Creek in present Cotton County, although he is also associated with posts on Walnut Bayou in Love County and Mud Creek in Jefferson County. Prior to 1837 Coffee operated all of these locations.

The Cache Creek trading house opened under Warren's auspices sometime in the late 1830s or possibly the early 1840s. It definitely operated by 1842. William Weaver, who visited the post in approximately 1843, described the structure as a fortification surrounded by a palisade and flanked on two corners with towers that had portholes. Loaded rifles and muskets were kept in the towers. A regional trading center, Warren's was used by notables such as Jesse Chisholm as a base for many of their expeditions. The post also had an unsavory reputation, with governmental claims that "nefarious transactions" occurred there. In 1845 Standing Rock, who witnessed the 1843 burial of Sequoyah, along with Standing Bowles and Watch Justice sent a letter from the post to Fort Smith distributing the news of the prominent Cherokee's death. In 1845 the Comanche began to demand that Warren abandon his Cache Creek location, and in early 1846 he traveled back to Massachusetts to marry Mary Kingman. While he was gone, the trusted acquaintance that Warren had left in charge sold the stock and fled, essentially closing the trading house.

Warren returned to Indian Territory, and in 1850, with Jesse Chisholm and Delaware leader Black Beaver, bought trade goods at Fort Smith to trade to the Plains tribes for mules, which the traders then sold to travelers headed to California. Many in the area criticized the traders for supplying arms to the Comanche and Apache. Warren lived for a time at Skullyville in the Choctaw Nation. In 1853 he helped supply the Whipple Expedition, traveling with the party to Old Camp Arbuckle. He then carried mail and collected specimens back to Fort Smith to ship to the Smithsonian in Washington, D.C. Warren settled on his farm near Fort Smith. He died on April 3, 1882.

The following (as per The Chicago Manual of Style, 17th edition) is the preferred citation for articles:
Larry O'Dell, “Warren's Post,” The Encyclopedia of Oklahoma History and Culture, https://www.okhistory.org/publications/enc/entry.php?entry=WA027.