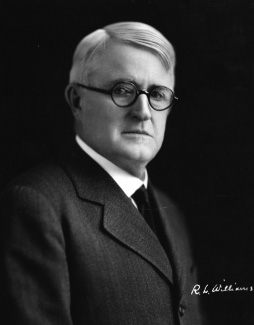 Oklahoma's third governor was born and named Robert Williams on December 20, 1868, in Pike County, Alabama, near Brundidge. The second of ten children of Jonathan and Julia Williams, Robert later informally added Lee to his name, in honor of Robert E. Lee. After attending local schools, Williams entered Southern University, Greensboro, Alabama. Graduating in 1890, he taught for one year and then decided to read law. He passed the bar and practiced in Alabama until 1893. That year he headed west to be part of the opening of the Cherokee Outlet. Finding little litigation, Williams returned to Alabama to study religion at Southern. Soon made a licensed Methodist minister, he rode circuit two years in north Texas. He discovered, however, that while he "brought many worldly people to the church," preaching was not his calling.

Returning to Oklahoma in 1896, Williams settled in Durant to practice law. Wealth soon came from his corporate practice and ownership in a bank, a cottonseed oil plant, an insurance company, and three thousand acres of cotton land. With his finances established, Williams entered politics as a Democrat. After local school and city positions, he was elected in 1904 as the Democratic National Committeeman for Indian Territory. In 1906 he became a delegate to the Constitutional Convention, playing a prominent roll in drafting the actual document. Elected in 1907 to the Oklahoma Supreme Court, Williams became its first chief justice. In 1914 he resigned his post to make a successful run for governor.

Williams brought an assertive, determined manner to the office that enabled him to dominate public affairs. Having promised "economy until it hurts," the governor cut departmental and institutional salaries and funds, abolished or consolidated state boards and even educational institutions, and halted scheduled building projects. Although reducing appropriations $171,946 over two years, he still found it necessary to raise taxes to balance the budget; therefore, he secured a two-mill increase in the ad valorem tax, an inheritance tax, a two percent oil gross production tax, and an income tax. Williams also reformed judicial matters by increasing the Supreme Court to nine members and making efficient procedural changes. Further, he promoted morality by encouraging grand jury investigations into gambling and liquor law violations.

To offset the growing strength of the Socialist Party, Williams supported legislation that limited the hours women worked, provided financial assistance for widows, orphans, and Confederate veterans, and brought state regulation to cotton gins and warehouses. He also secured the nation's first regulatory statutes enacted to prevent the collapse of crude oil prices by tying production to demand. Other reforms addressed workman's compensation, cooperative marketing, a Bureau of Weights and Measures, an Insurance Board, and a home ownership fund.

Never opposed to essential services, Williams approved the building of a girl's reformatory, a University Hospital, and a Union Soldiers' Home. The governor took over complete control of the Capitol Building Commission and personally supervised the edifice's completion within allowed monies. He cut only one feature—the dome, which he considered a waste of steel and money.

In 1916 Williams called a special session over a chaotic situation. On June 1, 1915, Oklahoma's "grandfather clause" was declared unconstitutional. To prevent an increase in black voters, two actions emerged. The first sent a new literacy test amendment to the people. The second enacted a law that set a brief registration period. The literacy test met defeat, but the registration bill worked, as blacks failed to register in time.

The Sixth Legislature's 1917 session was mainly routine, except for an important appropriation of $688,215 to match federal funds badly needed to build roads and bridges. Soon after adjournment war was declared, and Williams quickly became famous as the "War Governor." A "super patriot," he mobilized state resources, encouraged local draft boards, promoted food and fuel production, and pushed Liberty Bond sales.

Leaving office having restored the power of the chief executive, he became the federal judge for Oklahoma's Eastern District. In April 1937 he joined the U.S. Court of Appeals. Retiring in 1939, he returned to Durant and remained active in church and civic affairs. A longtime member and president of the Oklahoma Historical Society, Williams helped create The Chronicles of Oklahoma and secure funds for the society's building in the Capitol Complex. After a short illness, Oklahoma's only bachelor governor died on April 14, 1948, and was buried at Durant. In 1953 a memorial marker was raised there to the man who "led Oklahoma on the road to national prominence and stature."

The following (as per The Chicago Manual of Style, 17th edition) is the preferred citation for articles:
L. David Norris, “Williams, Robert Lee,” The Encyclopedia of Oklahoma History and Culture, https://www.okhistory.org/publications/enc/entry.php?entry=WI017.