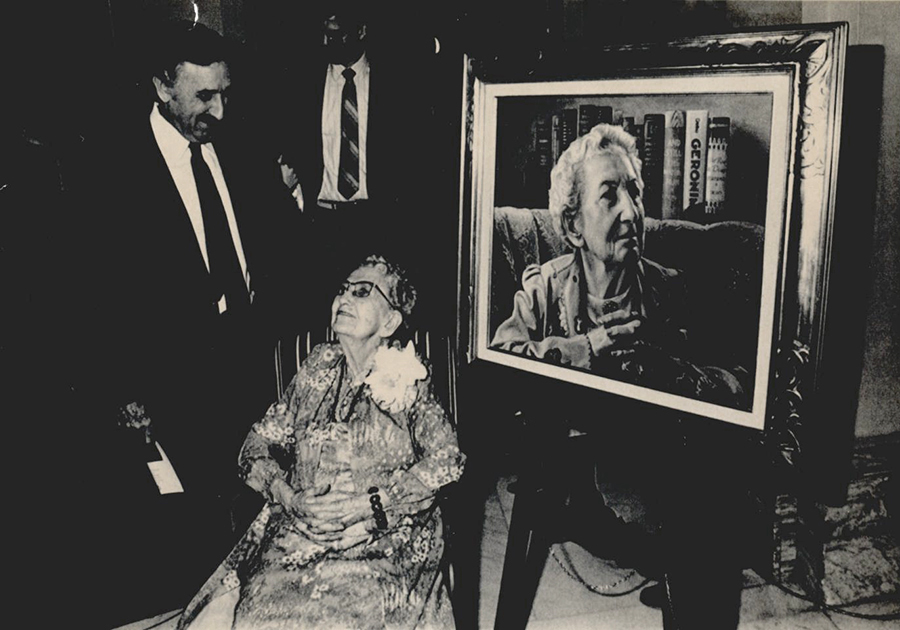 A painter and a printmaker, Charles Banks Wilson was born in Springdale, Arkansas, on August 6, 1918, and grew up in Miami, Oklahoma. Demonstrating an interest in art at an early age, he attended the Art Institute of Chicago from 1936 to 1940. In 1941 he married Edna McKibben of Miami and moved to New York City, where he produced his first lithograph for Associated Artists of America and drawings for the first of many books he would illustrate over the next twenty years.

Returning to Oklahoma in 1943, Wilson established a permanent studio in Miami and in 1945 began teaching night classes in drawing at Northeastern Oklahoma A&M College. Eventually he became head of the art department, which position he held until 1960. During this period he continued to illustrate books and produce lithographs from his own press. He also completed a number of portrait commissions, the first in 1957 from Tulsa oilman and collector Thomas Gilcrease.

From 1963 to 1968 Wilson worked for the state legislature producing life-size portraits of Cherokee linguist Sequoyah, humorist Will Rogers, athlete Jim Thorpe, and Sen. Robert S. Kerr for the Capitol Rotunda. In 1970 the legislature commissioned a series of murals for the Capitol depicting events in Oklahoma history, a project Wilson completed in 1976. The same year he received the Governor's Arts Award and a Distinguished Service Citation from the University of Oklahoma. In 1977 he was inducted into the Oklahoma Hall of Fame.

In 1979 Wilson resolved to complete a project begun many years before, traveling throughout Oklahoma to assemble a collection of life portraits representing every American Indian nation or tribe in the state. Completed for the most part in 1982 and exhibited nationally, these portraits eventually were deposited at the Gilcrease Museum in Tulsa, which today owns the largest collection of Wilson's work. Others of his paintings, drawings, and lithographs are found at the Metropolitan Museum of Art in New York City, the Library of Congress and Smithsonian Institution in Washington, D.C., the Philbrook Museum of Art in Tulsa, and in many private collections. Wilson died on May 2, 2013.

The following (as per The Chicago Manual of Style, 17th edition) is the preferred citation for articles:
David C. Hunt, “Wilson, Charles Banks,” The Encyclopedia of Oklahoma History and Culture, https://www.okhistory.org/publications/enc/entry.php?entry=WI024.