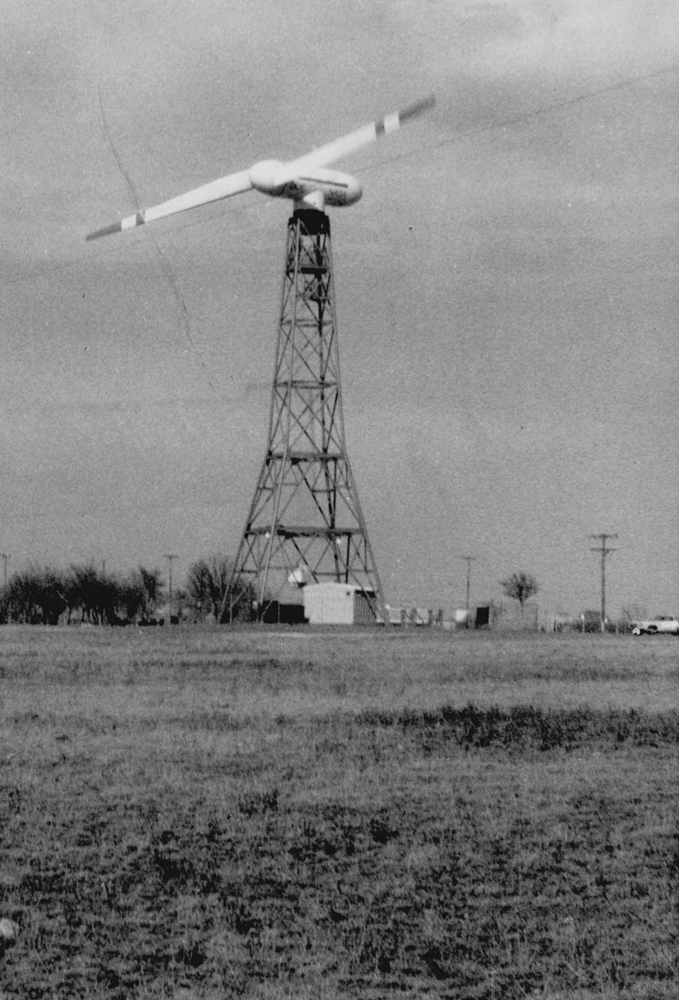 Oklahoma is notable for wind. The state song, Oklahoma!, mentions wind twice in its first stanza. Early American Indian peoples of western Oklahoma knew about wind through hard experience. These nomadic people left no writings about the wind, but their use of the tipi shows they understood that a round footprint lessened the effects of strong winds. The 1541 Coronado Expedition, in which Europeans crossed the Oklahoma Panhandle for the first time, experienced the frightening effects of severe winds during southern Great Plains thunderstorms.  Wind dries up dry waterholes, desiccates plants, and can be a general environmental nuisance. However, as a renewable resource, wind power has tremendous potential for use today, especially in western Oklahoma.

With late-nineteenth-century agriculture on the Great Plains, windmills with towers of ten meters (thirty-three feet) or more were used to grind grain and, more widely, to pump water for animals and humans. During the 1930s drought and Dust Bowl, wind-driven pumps helped to provide water for farmers who chose to stay in the state. Over time, the devices became increasingly efficient and were fabricated with durable metal and self-regulating controls.

In the early twentieth century the appearance of electrical appliances and machinery revolutionized people's lives, but Oklahoma did not have electrical distribution systems in rural areas. Thousands of farmers and ranchers purchased "wind charger" devices such as those made by Wincharger (a brand-named unit with vanes similar to those of a windmill, and placed on a tower) to provide small amounts of electricity (650 watts for the most widely sold model). Using a battery backup, the charger produced enough power for electric lights in houses and barns and for radios and small machines. The New Deal's Rural Electrification Act of 1936 quickly led to widespread centralized generation and distribution of electricity and the decline of private generation.

Larger versions of electrical turbines evolved during the twentieth century. By century's end, the technology had improved so that wind generation was technically feasible on an industrial scale. However, coal and natural gas prices were significantly cheaper in Oklahoma, and the major power corporations felt no reason to include wind in their portfolios. Unlike other states, in Oklahoma the wind-power industry was not spurred by a government mandate to use renewable resources.

In the 1990s and early 2000s improved atmospheric monitoring through the 120-station Oklahoma Mesonet, coupled with advanced wind-energy resource mapping from the Oklahoma Wind Power Initiative, facilitated wind energy development. The first wind farm was built north of Woodward in 2003. Two technical factors combined to make the early twenty-first century a boom time for Oklahoma wind power. First, the turbines' efficiency rapidly improved. Use of lightweight composite blades, development of more efficient turbines, and use of turbines with three megawatt (1 megawatt equals 1 million watts) capacities drove the generation cost low enough to compete with coal and natural gas generation. Second, Oklahoma's world-class wind resource was spread over the western part of the state, an area with relatively few residents and few opportunities to make better economic use of the land. Development could take place there with little in the way.

Oklahoma is a giant in wind generation, ranking second among the fifty states (behind Texas) in installed wind-power capacity. Wind-power capacity refers to the amount of energy that could be produced by the wind if all the turbines produced simultaneously at maximum output). As late 2018 the state had more than 7,400 megawatts of installed capacity. Oklahoma is extremely windy, but the wind does not always blow. For that reason, the amount of electricity produced is a function of the installed capacity (7,400 megawatts) times the capacity factor. The capacity factor is a measure of how often the wind at the height of the turbine blows strongly enough (approximately twenty to twenty-five miles per hour, depending on the type of turbine) to allow the turbine to produce the maximum amount of electricity. The capacity factor values in Oklahoma typically range from 30 to 45 percent. The actual amount of energy generated by the Oklahoma wind in 2018 was approximately one-third of all of the electricity collectively generated by the other power sources. That one-third corresponds to the total amount of electricity for the equivalent of energy needed to power more than two million homes.

In addition to producing approximately one-third of the state's energy, the wind-energy industry provides economic development benefits in other important ways. First, it creates new jobs and gives monetary compensation to landowners, assessment districts, or organizations. The current aggregate of wind turbines results in approximately $25 million per year in direct lease payments to landowners. There is a pronounced geographic variation of the direct impacts from east to west. Toward the east, rough terrain helps to reduce wind resources. In western Oklahoma, however, there are large areas of commercially viable wind resources particularly associated with a series of ridge lines that extend west to east across the region. The economic impact is especially important there, as western Oklahoman communities, like the rest of the rural Great Plains, face the loss of jobs and population. In addition to direct payments to landowners, the number of wind turbines in Oklahoma (reported at 3,797 in 2017) represents more than $10 billion in capital investment and supports thousands of directly and indirectly related jobs. Research has also highlighted the importance of the industry for small rural school districts, which receive significant tax support as the new industry develops.

Less easily measured are the benefits in terms of environmental protection and clean development that offset both the costs of environmental degradation and the public health risks associated with conventional fossil energy generation. The environmental impacts include a reduction in atmospheric pollutants (e.g., nitrous dioxide/NO2, sulphur dioxide/SO2, carbon dioxide/CO2, etc.). For example, the pollution savings associated with wind turbines represents the equivalent of removing roughly two million cars from the road. There is a concomitant effect of improving health outcomes and reducing the financial costs of pollution-related health issues. These positive effects also reduce the societal costs incurred by energy supply interruption or market-mediated price spikes. In a broader view, the onset of wind power in the state signals the beginning of a technological transition to increased reliance on clean, domestic, renewable energy that is regionally based.

Before the advent of the first wind farms, the state had instituted a partial tax rebate for turbines. The number of turbines has grown exponentially since the first became operational in 2003, yet wind power has been hindered by misperceptions and shifting policies. A majority of Oklahomans are urban dwellers living far from the closest wind turbines. Reputable polls have shown that the majority favor the installation of turbines. However, vociferous opposition to expanding the wind program has surfaced. This may have resulted from two circumstances: First, the state has had looming budget deficits, which the legislature attempted to ease by ending tax rebates. Second, Oklahoma has experienced more than a century in which the petroleum/fossil fuels industry provided a strong economic base for the state's growth.

Development of Oklahoma wind farms has brought about several lawsuits. The allegations have ranged from interference with tribal rights, to visual nuisance, to negative health impacts, to tax status questions because of ownership by a public entity. Such instances of opposition are likely to continue for years because Oklahoma law is not settled on these issues.

Oklahoma's wind industry has been a huge success, and its history is still unfolding. Larger and more efficient turbines are being made, and old turbine locations will be reused to increase installed capacity and to increase capacity factors as the turbines become taller and taller. The wind resource cannot be depleted over time. Despite opposition, economic benefit to the state is substantial, and its existence is not dependent on subsidies. Wind turbines are a permanent part of Oklahoma's landscape.

The following (as per The Chicago Manual of Style, 17th edition) is the preferred citation for articles:
Scott Greene and Steve Stadler, “Wind Energy,” The Encyclopedia of Oklahoma History and Culture, https://www.okhistory.org/publications/enc/entry.php?entry=WI085.