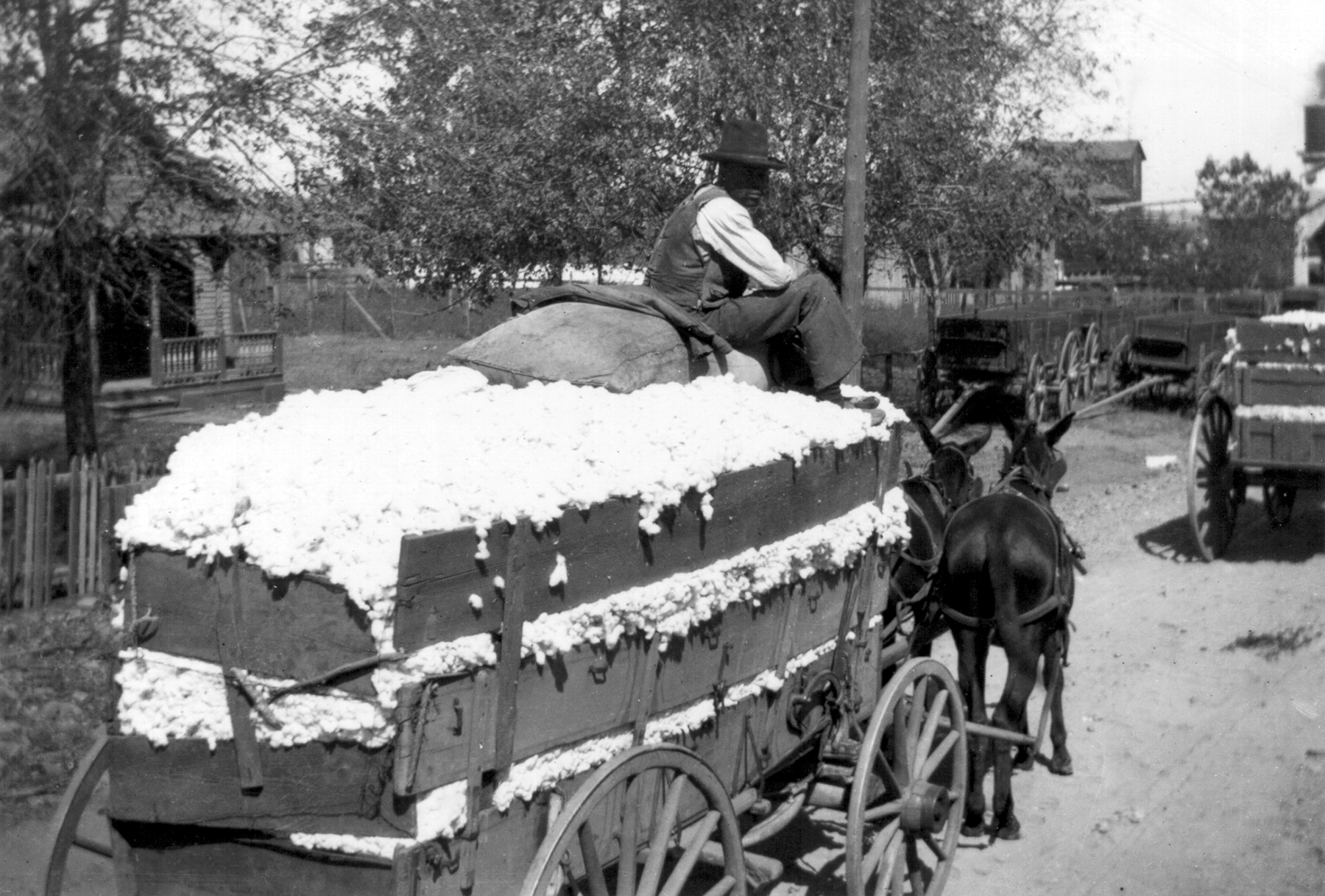 Since the arrival of the Five Tribes, cotton has been a major agricultural commodity in Oklahoma. First planted in the Choctaw Nation in 1825, cotton was grown on small subsistence farms and large plantations. Col. Robert M. Jones, a Choctaw, owned an operation in 1851 that exceeded five thousand acres from which approximately 2,275 enslaved African Americans harvested seven hundred bales. However, the Civil War (1861–65), which brought devastation to farms of all sizes, the elimination of slavery, and general impoverishment, temporarily halted significant cotton production.

By the mid-1870s recovery was underway. Although tribal law forbade American Indian citizens to lease their lands to outsiders, many "employed" noncitizens or tenants, who by 1900 cultivated 80 percent of the cotton farms in the Indian Territory. Additionally, the opening of what became Oklahoma Territory between 1889 and 1901 led to an influx of cotton farmers.

Whether a tenant or a homesteader, a farmer began each season by tilling the soil and planting the crop in late April or early May. Once the plants sprouted, workers with hoes thinned the rows once to prevent plant overcrowding and again later to control weeds. At harvest time, normally beginning in late September, family members and other workers placed the handpicked cotton in cloth sacks, which were weighed when full. The crop was dumped into a wagon and delivered to nearby gins. Such practices continued until widespread mechanization was instituted after World War II.

At 1907 statehood farmers in all but three Oklahoma counties raised cotton on almost one-fourth of the state's cultivated acreage. The most concentrated production centered in the counties of the southern half and in the area north and east from Oklahoma City to the Arkansas River. Approximately three hundred cotton gins processed the lint into five-hundred-pound bales and separated the seed from the fiber. Compressing plants, in which the bales were pressed and stored, operated at McAlester, Ardmore, Mangum, and Oklahoma City. The latter became the center for marketing companies. Eight textile plants purchased fiber for their businesses, and thirty-seven cottonseed oil mills crushed seeds, using the residue oil for food products, the linters to make paper, the hulls to mix with livestock feeds, and the cake and meal to feed animals.

Although the boll weevil arrived in Oklahoma around 1905 and wrought havoc over much of the state into the 1920s, cotton farmers continued their expansionist plans. During the World War I era they annually produced approximately one million bales. When the European demand for cotton drove the price to 34.98 cents per pound in 1919, Oklahomans planted 3,312,000 acres in the crop and gathered 1,336,000 bales in 1920, exceeding all previous yields. Unfortunately, the price tumbled to 9.4 cents per pound, causing the agricultural crisis of 1920–21.

Oklahoma cotton farmers ignored the lower prices. With two-thirds of farmers putting one-fourth of the state's cultivated land in cotton, the crop's acreage approached or exceeded four million during six years of the 1920s, with an all-time high of 5,396,000 in 1925. Income from the sale of lint processed in more than one thousand gins averaged $118 million between 1923 and 1929, making cotton the state's major cash crop and placing Oklahoma third behind Texas and Mississippi among all cotton-producing states.

With such expansion, steps for enhancing production and adopting labor-saving techniques were considered. The Oklahoma Agricultural Experiment Station's research efforts to develop cotton suitable to the region led to the introduction of the long-staple 'Oklahoma Triumph' and 'Lightning Express' varieties. Some farmers substituted tractors for draft animals in cultivating and planting, and operators in the southwestern counties harvested with a sled, a slotted implement designed to remove the bolls from the stalk when dragged across the field. However, instead of mechanical devices, the technique of snapping cotton gained popularity. Rather than picking the seed cotton from the burrs, some producers delayed harvest until they could pull the entire bolls from the plants. Although the amount of trash caused higher ginning costs, snapping had become the prevalent practice by the 1930s.

The organization of a statewide marketing cooperative, the Oklahoma Cotton Growers' Association, was introduced as a method for selling cotton to offset the low prices. By the end of the 1920s one-third of the Oklahoma crop was delivered to the cooperative. Producers pledged to pool their harvest to gain bargaining power when negotiating with buyers. This practice was reinforced through the enactment of the Agricultural Marketing Act of 1929. Unfortunately, when commodity prices plummeted with the outbreak of the Great Depression, farmers increased their acreage, thus contributing to greater surpluses and even lower prices.

The implementation of the Agricultural Adjustment Act of 1933 served as the forerunner of the federal government's assumption of regulating production in exchange for income protection. Oklahoma cotton farmers subsequently plowed up 1.2 million acres of the planted crop, and ninety thousand growers were cooperating with the programs by 1934. With the acreage restrictions along with the effect of a drought from 1929 to 1939, the number of cotton farms fell from 123,477 to 86,889 and harvested acreage decreased from 4,148,228 to 1,671,481.

Declining production continued for the remainder of the century. Such issues as the competition of synthetic fibers with cotton goods, the variations in government production controls and subsidies, a decreasing rural population, the higher maintenance cost in raising cotton as compared with wheat, corn, or sorghum, and the ever-present cost-price squeeze that farmers experienced were contributing factors. Consequently, after harvesting more than one million acres a year during the 1950s, by the twenty-first century the number was less than two hundred thousand acres. The gathering of 600,000 bales annually in the 1940s fell to 200,000 to 300,000 bales after 1960.

As such changes occurred, the state's southwestern region continued as the leading center for cotton production. Tillman and Jackson counties normally harvested approximately 50 percent of the state's crop by the 1980s. Although farmers in the former county devoted most of their acreage to dry-land operations, those in the latter frequently led the state in irrigated production. Jackson County operators lived in the Lugert-Altus Irrigation District, which began distributing surface water by canals from Lake Altus-Lugert in 1948. In addition, cotton growers there and elsewhere had access to underground sources delivered by submersible pumps.

Initially, row-crop irrigation from surface sources and wells included furrow systems utilizing drainage ditches, as well as plastic, rubber, or aluminum siphon tubes, which required extensive labor. However, center-pivot sprinkler systems introduced in the 1970s, along with the later improvements of nozzles lowered closer to the plants, reduced labor requirements and moisture wastage. Irrigated cotton generally yielded averages from five hundred to one thousand pounds per acre, and dry-land crops normally delivered half those amounts.

Technological changes after World War II modified Oklahoma's cotton industry. In addition to the replacement of animal power with ever-increasing tractor horsepower, farm sizes grew as sophisticated plows and planters permitted operators to till the soil and plant seed at uniform depths and intervals on as many as two hundred acres per day. Such equipment, coupled with mechanical pickers or strippers, reduced the growing and gathering of an acre of cotton from an average of 150 to 6.5 man-hours by 1970.

In the 1970s the introduction of the module altered cotton processing. This system permitted farmers to dump the harvested bolls directly from the picker or stripper into an onsite module builder, which compacted the raw cotton into bales. Once the compaction was completed, the builder moved to another site. Each module remained in the field until a truck carried it to a gin. Besides avoiding time-consuming transport, operators of larger and more modern plants were better prepared to begin the ginning process, which included cleaning the trash from the cotton, separating the seed from the lint, and compressing and packaging the approximately five-hundred-pound bales in synthetic bagging. With some of the larger facilities capable of processing as many as sixty bales per hour, there were only thirty-two gins in the state in 2003; the obsolete compresses had become storage warehouses.

When the boll weevil threat reappeared in the 1990s, farmers, with the support of Oklahoma's Board of Agriculture, formed the Oklahoma Boll Weevil Eradication Organization and collected fees from growers to control the insects. In conjunction with mechanical harvesting, defoliants were sprayed to eliminate plant leaves. As crop production became more sophisticated and expensive, some growers hired consultants to advise them in their operations. Some larger operators integrated science and technology by utilizing global positioning systems, which continuously gathered information on designated plats by satellite to notify operators of any problems.

Just as the systems in producing cotton changed after World War II, so did cotton marketing. While the transporting of the harvest to privately owned or cooperative gins continued, growers became dependent upon firms such as the Plains Cotton Cooperative Association in Lubbock, Texas, which offered such services to Oklahoma producers as arranging for the classing of each bale under U.S. Department of Agriculture supervision, as well as providing customers with access to an electronic marketing system in the process of selling their crops. Furthermore, warehousing was available at the Oklahoma Cotton Cooperative Association at Altus, which handled the sales and delivery of the stored bales to buyers from both domestic and foreign firms.

Farmers in Oklahoma's north-central counties began adapting to changing economic and environmental conditions in the 1990s. Although cotton had been planted there on a small scale, the region was wheat, corn, and sorghum country. Yet certain factors resurrected the consideration of the crop. Implementation of the International Agriculture Improvement and Reform Act of 1996, also known as the Freedom to Farm Act, in 1995, authorized producers to plant any program crop in their base acreage and receive benefits. This advantage led some operators to consider cotton at a time when its cost/price ratio was more favorable than their regular crops. Those who irrigated learned that cotton did not require as much water. The availability of short-season and short-fiber varieties, along with the absence of boll weevils, made the idea attractive.

Consequently, in north-central Oklahoma acreage planted in cotton went from zero in 1992 to twenty-four thousand acres in 2000. Yields averaged from three hundred to six hundred pounds per acre. Although the amount of land seeded and the yields varied intermittently after 1995, the flexibility displayed by Oklahoma farmers in this development, as in the past, indicated that cotton would remain an important commodity in the state's agricultural system.

Leo Kelley, "'I Should Have Been a Mule': Cotton Pickin' in Southwestern Oklahoma," The Chronicles of Oklahoma 76 (Summer 1998).

The following (as per The Chicago Manual of Style, 17th edition) is the preferred citation for articles:
Garry L. Nall, “Cotton,” The Encyclopedia of Oklahoma History and Culture, https://www.okhistory.org/publications/enc/entry.php?entry=CO066.